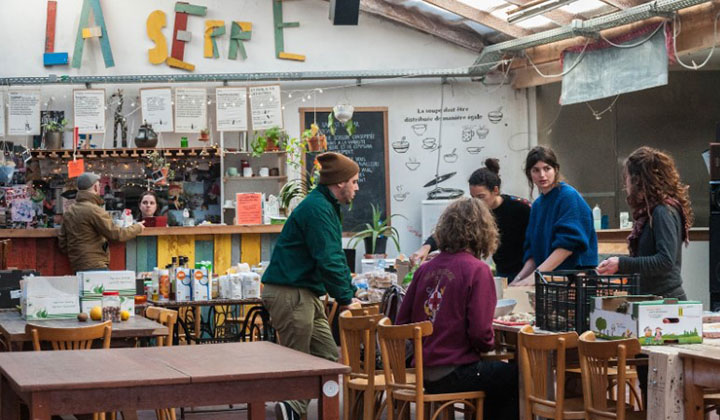 Communa invites members of the public to learn how they’re transforming disused spaces across Brussels | Image provided by Xavier Damman (CC BY 4.0)

Citizen initiatives across the Belgian capital are finding new ways to collaborate and coordinate their efforts. Could this be a new model for influencing social change in cities?

Brussels is a city that’s intimate with inertia. In its center stands the Palais de Justice, a grand 19th-century courthouse that was once described as the eighth wonder of the world. Scaffolding was erected in 1982 as part of a bold plan to renovate the building for the first time since the Second World War, but 37 years later it remains untouched. Political point-scoring and division over budgetary allocations have stalled the project for nearly four decades. Today, the monument serves as an icon for the dysfunction at the heart of Europe’s capital.

For locals, the Palais de Justice is a lesson that it’s often easier to start something from scratch than repurpose an old idea. The city is a hotbed for radical social enterprises, citizens’ initiatives and grassroots activism, each seeking to build alternative business models for a more sustainable and participatory future. Now, a new movement has been born to make them more effective.

Citizen Spring is a network based in Brussels that aims to connect local projects so that groups can identify ways to support each other, coordinate their activities, and promote sustainable and future-facing ideas. It was launched by Xavier Damman, co-founder of Open Collective — a transparent funding platform for open source projects that has attracted donations from big Silicon Valley players like Airbnb and Facebook. During a climate march in the Belgian capital last year, Damman began talking to activists about the support they needed to create a more sustainable Brussels.

“Demonstrating on the streets is the easy thing to do, but it’s also boring. It can be useful, but we should all be asking what else we can do,” he says. “If we want system change, not climate change, we need to recognize the future is already here — it’s just not evenly distributed. We need to bring to the surface the things that people are already doing to initiate change.”

Damman reached out to the city’s community initiatives and invited them to join the first ever Citizen Spring event. He took inspiration from industry open days, where businesses are encouraged to throw their doors open to the public, and decided to recreate the idea for citizen-led efforts.

From March 21st to 24th, the city’s social enterprises and grassroots projects took time out of their hectic schedules to showcase their work. Members of the public were offered tours and presentations of 45 different initiatives where they learned why the projects were founded and how they hoped to improve the city. Workshops were also facilitated to find new ways for social enterprises to work together and pool resources.

“It used to be that big institutions, governments, NGOs and private companies had the monopoly on creating an impact. But citizens are becoming more and more empowered to participate,” Damman said. “We want to accelerate that transition from citizens being passive consumers towards being actors, creators, and contributors. Not just by promoting what they do, but by encouraging people to join them. Opening the doors is just the first step, but it’s an important one.”

The concept is already spreading to other cities in Belgium. Antwerp established its own Citizen Spring network earlier this year, and Damman expects more cities in Europe and elsewhere to join the movement in time for next spring. “There are citizen initiatives in every city in the world, but too often they work in isolation. It’s in everybody’s interest that we connect them so they can find ways to increase the reach and impact of everybody’s work,” he adds.

The municipal authorities in Brussels hope the renovations to the Palais de Justice will be finished sometime in 2028. Political deadlock has prevented the Belgian government from both preserving its history and preparing for the future. Fortunately, the citizens of Brussels aren’t asking for permission to take matters into their own hands.

If you’d like to launch a Citizen Spring network where you are, email info@citizenspring.be for more information.

Jesse Onslow is a freelance writer and digital consultant. He has worked on projects with Google, Royal Bank of Canada and the Singapore Economic Development Board. His words have been

Jesse Onslow is a freelance writer and digital consultant. He has worked on projects with Google, Royal Bank of Canada and the Singapore Economic Development Board. His words have been published by The Guardian, The Telegraph and Inverse.