MoRUS: A Museum for Urban Reclaimers in Manhattan - Shareable
Skip to content 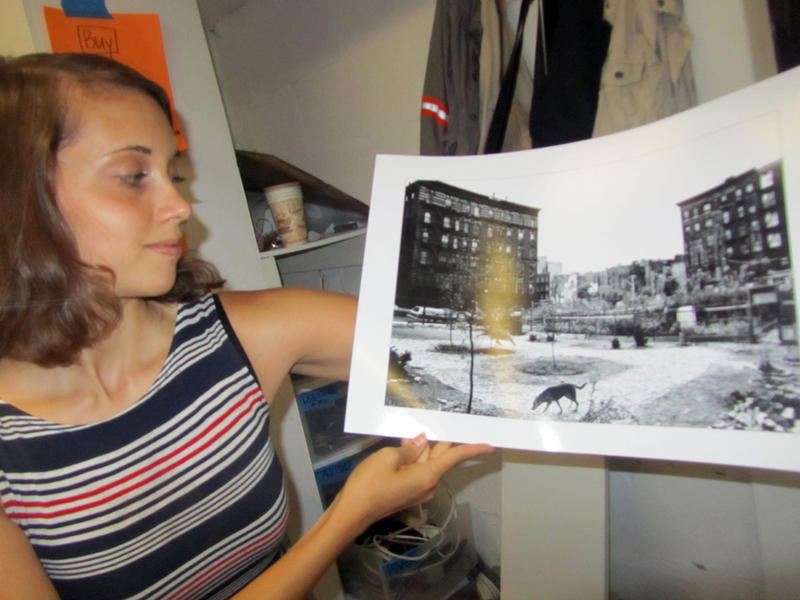 A city plagued by bankruptcy and violence, between 1970 and 1980 New York lost one million people—10% of its population. The result was an abundance of empty space. Along with decreased police resources, squatters were able to make a foothold in the city’s most blighted neighborhoods, opening up abandoned buildings and converting them into collective houses and community spaces and turning abandoned lots into gardens.

At the time, the Lower East Side (LES) of Manhattan was considered the center of the movement, but if you ask an average seasoned New Yorker about squatting on the Lower East Side, they would likely tell you that those days are history—the stuff of museums. And they would be partially right.

In the next thirty years a million people moved back, plus about another three hundred thousand. Property values continue to boom in the overcrowded city, and the three vehemently anti-squatter, NYPD-boosting mayors focused on putting an end to the rent-free LES. Gardens were bulldozed to make way for condos. Squats were demolished and gutted, along with them the legal loopholes called “squatter’s rights” that protected them for years. In the mid 2000s, the last few remaining collective houses reached an agreement with the city for property ownership—a legalization deal that many considered the end of an era.

The remaining squatters don’t really see it that way. Over the last year, the storefront of world-renowned street-punk Mecca C-Squat is in the process of a transformation. Its gate was removed, and its basement, once famous for its show space and half-pipe, has been cut in two. Construction has begun on the Museum of Reclaimed Urban Space (MoRUS), a reconciliation of the now legalized-squat’s agreement with the city to use their storefront commercially. “Rather than open another 98 cent pizza store, we wanted to do something political with the space,” said a C-Squat resident—one of the many who volunteered time, energy, and money to making the project a reality. 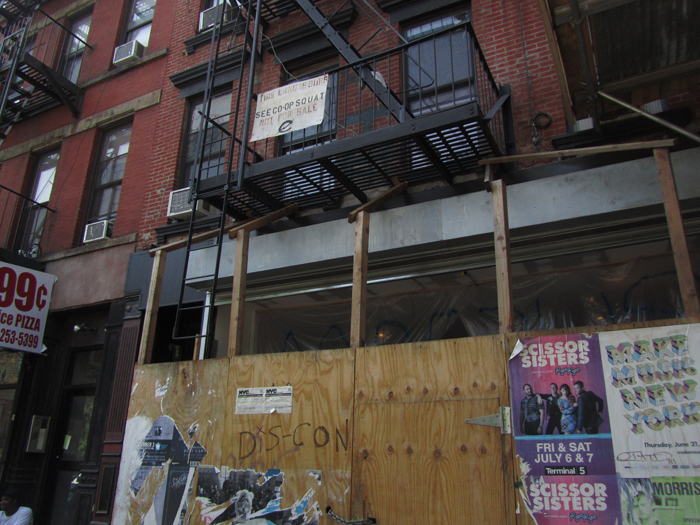 If you’re imaging a display case of grungy mannequins huddled around a wood-burning stove, think again. The museum seeks both to immortalize the struggles of its surrounding community over the last several decades, and to serve as a center of the ongoing fight for free space and culture.

Going through a dresser full of photos and ephemera in the MoRUS basement, Laurie extracted a picture of a squalid abandoned lot, a lone mangy dog running through it. “This was the 9th Street community garden, which is right across the street from the museum before it was reclaimed.” The garden, planted by the community in the late eighties, is now so lush and green I could hardly see inside of it from the sidewalk. 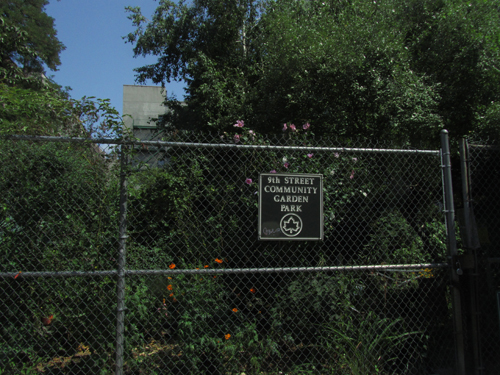 Gardens like these are undeniably an improvement, but maintaining them wasn’t easy. In fact, many did not survive the nineties. Laurie showed me another photo of The Garden of Eden, a beautifully landscaped urban oasis built by Adam Purple in a rubble-filled abandoned lot on Eldridge Street. She pulled another photo from a drawer of three police officers in their now-retired periwinkle blue uniforms protecting a bulldozer as it digs up the lovingly groomed shrubs. “The city says they never removed any community gardens. I was there myself three times, and I have video, of when the city showed up early in the morning with bulldozers. The 1% control history, so we’re going to show the truth,” Bill concluded.

More videos of similar incidents, such as the infamous Tompkins Square Park riot of 1988 in which NYPD covered their badges to brutally evict a homeless encampment, will also be on display. Murals painted around the space will also depict community history. The staircase leading to the basement is a completed example. Each step is painted with a moment in the history of community cycling. The mural begins “In the 1980s bicycling was extremely unsafe and lacked infrastructure in NYC.” The last step reads, “2007, Bicyclists up 100%”.

While photos, video, and squatter’s art will comprise the majority of the exhibition space, the C-Squat storefront will only serve as the center of the museum’s domain. MoRUS will offer several walking tours for tourists, school-groups, and residents. A video on MoRUS’ site of one trial tour shows guests in the studio of performance artist/illustrator Fly in Umbrella Space. She enthusiastically shows the guests photos of the house before and during reconstruction. Next the guests go to the Bullet art space, which houses an art gallery, a theater in the basement, and the building’s original graffiti-covered door from the 70s.

“Residents seem to love the idea of the public coming into their squats,” Bill told me. Other tours will visit several of the Lower East Side’s profuse community gardens. More hands-on guests will be offered the opportunity to get their hands dirty if they visit during a community work day, and not just with soil.

“We hope to have people like [housing activist] Frank Morales do lectures, DIY skill shares, how to open up a community garden, how to fix your bicycles, anything to help your community be sustainable,” said Di Paola.

Other lectures and exhibits will focus on contemporary issues facing the Lower East Side. “I recently went to a town hall meeting with [Manhattan Borough President] Scott Stringer, and community members were talking about gardens, lack of public transportation, fracking,” said Mittelmann, “We’re interested in documenting these ongoing struggles in the East Village.”

Another skill the MoRUS hopes to impart to guests is the consensus process, now made famous by Occupy Wall Street. Di Paola and Mittelmann see reaching decisions in this way as being an integral part of how groups in the village have always functioned collectively. Mittelmann mentions an idea to give young visitors a problem, and have them solve it using consensus.

The museum itself was built on such a model. Different working groups assemble regularly at C-Squat, dividing up tasks and scheduling work days, some open to the public. One such work day was held on July 28th, when the exhibition space was opened to prepare a mosaic for the façade of the museum. Gloved and goggled volunteers cut glass and tile into coin-sized shards, each doing their tiny bit to help build the museum. 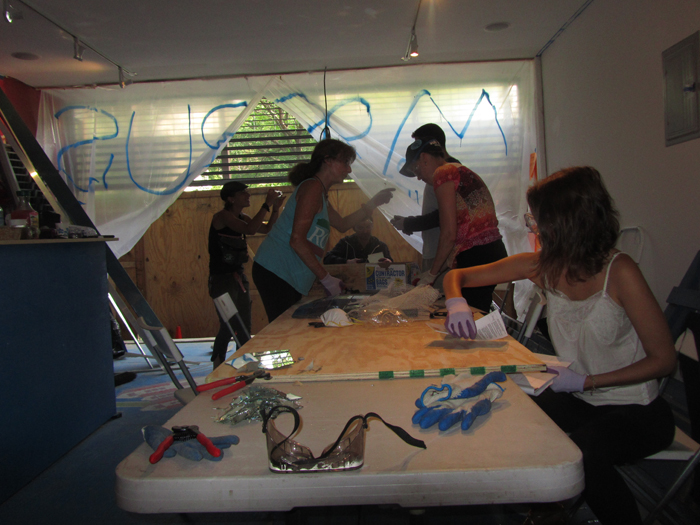 Their funding model operates in a similar fashion. MoRUS has so far raised over $12,000 through a Kickstarter-like website called Crowdrise.  A scrawl of supporters lists donations between $10 and $5,000. The museum itself will be free, covering most if its costs from walking tours, which will cost around $20. Recently MoRUS gave its first paid tour to a group of thirty high school students from the High School for Innovation in Harlem.

“We’re aiming for a soft opening in August,” Bill said. Soon after, a discussion amongst the volunteers ensued on what exactly should go on their storefront sign: Radical History Museum? Museum of Reclaimed Urban Space? Or simply MoRUS? They decided to figure it out later, perhaps even waiting until the moment of assembly.

I thought about how such a decision might be reached at the nearby Tenement Museum, a city and corporate-sponsored Lower East Side institution in which period-dressed re-enactors explain to tour-groups what poverty and mutual aid were once like. MoRUS is not quite so historical, not quite so professional, and as authentic members of the community they have no need to play dress up. One volunteer at the mosaic-making workshop also does graphic design for trade shows and major art museums. While chopping up tile she remarked, “Working here is way more fun.”