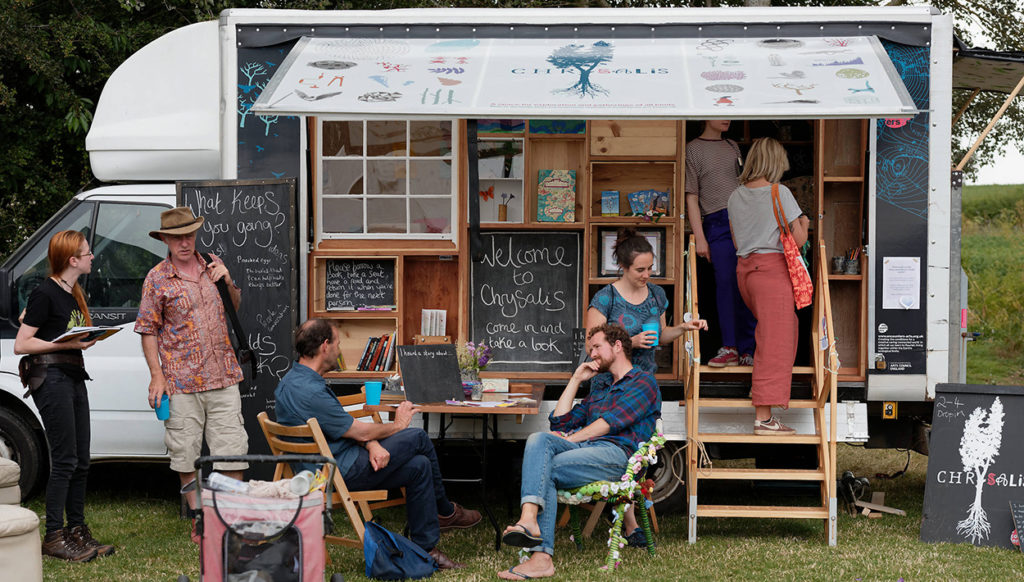 Chrysalis is a multi-purpose and eco-friendly vehicle created by the hands, hearts and imaginations of hundreds of people in South Devon, UK. This mobile communal space, built in a van, aims to be an “inspirational resource for local people to use for learning, creativity, celebration, exchange, dialogue and gatherings of all kinds” as described on its website. It is bringing people together, facilitating connections and strengthening communities.

Chrysalis, also known as a cabinet of ecological curiosities, is funded by the Arts Council of England and the Lottery Community Fund. It is the vision of Encounters Arts, a company of artists, producers, facilitators and change agents.

The mobile communal space was built with the principles of the circular economy and ecological design in mind. The project’s website says it involved an “extensive programme of creative consultation, co-design workshops, and user interviews with different community groups and individuals.” Local architects and designers Wo/Co were chosen to coordinate the conversion of the van into the usable Chrysalis project.

Susie Peat, Chrysalis’ systems and finance administrator, says “our main aim is, as change-makers and facilitators, to support community engagement and conversation.  The van works wonderfully for this as people come together to make and create things whilst in a lovely space, already (literally) made and designed by a community.” This community of makers, led by skillful architects and designers, embraced and relied on many volunteers and craftspeople to make their dream a reality – a process that took 18 months.

Local nonprofits that contributed to the project have built relationships to collaborate more. Their contributions include a local network of male carers and children called Dangerous Dads, which created a showpiece table made from recycled materials; learning disability nonprofit Lifeworks, which carved wooden spoons and other cutlery for the project, and Torbay Yarn Bombers, which transformed a chair into a living garden.

Despite the coordination challenge and the challenge of making the van as ecologically sound as possible, the result is impressive. Emily Reed, the project’s communication coordinator, says “it’s been phenomenally rewarding to see how much it has meant to people to be involved in the making of Chrysalis, how much of themselves they have given to the project, and the incredible quality of their contributions.”

Chrysalis has been touring the UK since June 2019, drawing attention to the power of collaboration and the beauty of re-purposed materials.

The project aims to facilitate shared experiences, learning and connection. Chrysalis operates on a sliding scale in an effort to be available to a wide range of communities.

Though in its early days, this multi-functional project has a lot of further potential to impact and inspire communities to connect, collaborate and be creative. Collaborative arts project Co-creating Change is providing governance support and has funded the Chrysalis’ next phase: a program of touring events.

The initiative is seeking further funding to buy and install solar panels. Project leads will attend the Museum Association Conference in Brighton this October as part of the artist movement Culture Declares, which has declared a climate emergency.

Chrysalis will also be piloting a new approach to the evaluation of creative participatory projects, funded by the Paul Hamlyn Foundation and working in partnership with researchers from Stanford University and Queen Mary’s University London. The initiative will track the language of its users to assess the change in their behavior. As described by Encounters Arts, this methodology “tracks the way in which people’s language changes over the duration of participatory creative processes and how this in turn can provide the most accurate indication of behavioral change.”