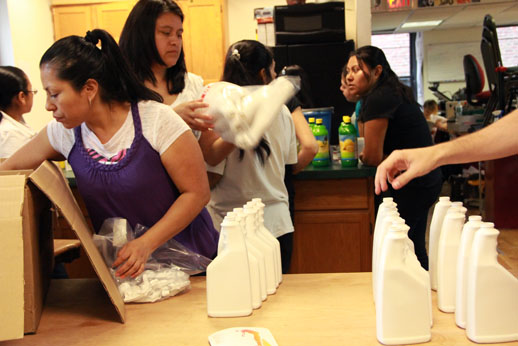 When microcredit first started appearing in the 1970s, it was introduced to fund female entrepreneurs in Bangladesh, who were not traditionally creditworthy but only needed a tiny amount of outlay capital (almost always under $100, often as little as $1 to $5) to start a business that could sustain them. The project, started by Bangladeshi banker Muhammad Yunus, was so successful it would win him a Nobel Peace Prize in 2006.

But if microfinance first appeared as a socially-conscious, simple way to help women build their lives out of poverty, it has since been discovered by big banks and petty criminals alike, with predictable results. Using the good name of micro-finance as cover, they’ve put huge populations that would have previously been too poor to receive loans or other financial instruments into debt: practicing loan-shark type deals over a couple bucks. Indeed, it’s estimated over 80% of microloan institutions practice this micro-banksterism.

An interesting approach, addressing both this crisis of legitimacy and the socially limiting nature of direct-to-the-individual loans, is being practiced by The Working World. An organization that first practiced in Argentina, then Nicaragua, and opened an office in New York City in 2011, The Working World addresses the structural problems of microfinance head-on.

They do this in three ways. The first is that they work closely with the businesses that they are going to fund (something Yunus, and most responsible micro-lenders, always practice), but, rather than aiming at entrepreneurs, they work with small and medium sized businesses. The second is that they treat the loan as an investment, not debt—so that they are invested in the success of the company, and so that they don’t unduly punish the business if it fails. And the third, and perhaps most interesting, is that they only work with companies that are worker owned and democratically managed.

They boast some impressive numbers. In six years, their projects have a 95% maturation rate, a much higher rate of success than your average VC. And they are consciously focused on the social impact and macroeconomic implications of their work. As a result, their funding and mission takes on a directly political bent. In describing how they transitioned from Argentina and Nicaragua to New York, they describe the current (abhorrent) employment and poverty situations in America and New York City, and then say “It is appropriate…that we should bring solutions fashioned in the Global South to create new types of opportunities for people here in the U.S.”

It may be humbling to believers in American exceptionalism that a micro-finance operation could make a difference here, but it already has. The Working World has helped a women’s cooperative of house-cleaners in Brooklyn, Si Se Puede, develop their own eco-friendly line of cleaning products, making their work safer for them, friendlier to the environment, and their business more dynamic. These are exactly the sort of solutions that you get from worker-owned businesses: ecologically responsible, worker-safe initiatives that, because they cost a little more to start, corporations are always loath to practice.

One of the hardest things for any business is getting cash for big new projects, and it is a boon for co-ops to have a funding source that is not a traditional bank, with all the assumptions about debt and payment that they bring to traditional business. Instead, organizations like The Working World can be allies in mission-building, providing much more than just money and debt, and help these new businesses of the solidarity economy flourish.