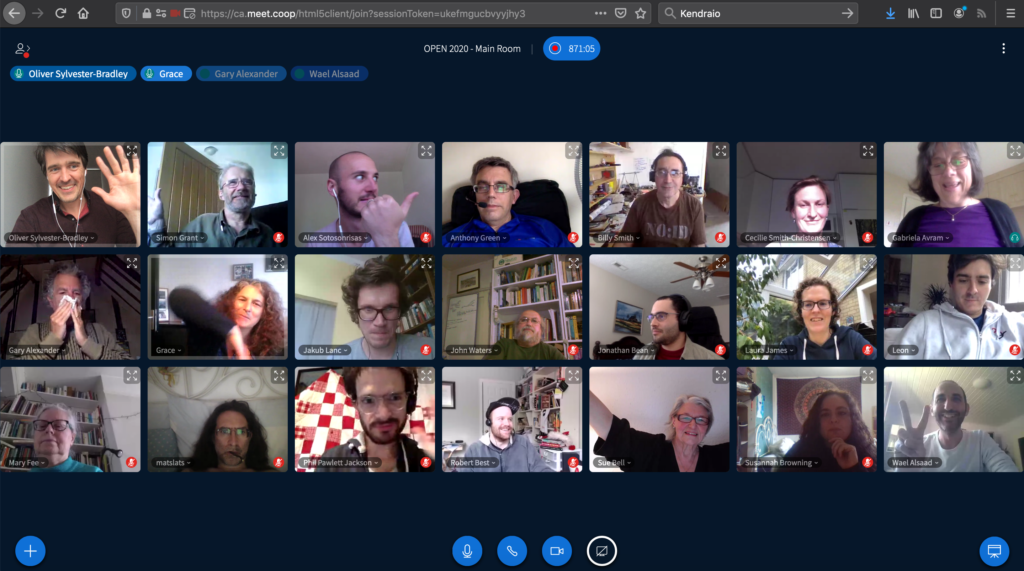 Sylvester-Bradley and others attending OPEN2020 via meet.coop (meet.coop photo)

When the COVID-19 pandemic hit in early 2020, video conferencing became a staple of almost everyone’s life, and a new verb (to Zoom) entered the language. As Zoom and their corporate competitors, like Microsoft Teams and Google Meet, evolved from useful services to necessities for both business and personal use, a group of people saw videoconferencing as an opportunity to grow the cooperative commons economy.

The Online Meeting Cooperative (meet.coop) was established using open-source software (BigBlueButton) to provide secure and transparent video conferencing services in a responsible manner (most of the meet.coop servers are powered by sustainable energy sources).

Meet.coop is what’s known as a platform cooperative, a growing class of online businesses that are collectively owned and governed by the people who depend on and participate in them, including the people who contribute their labor and/or other assets.

Oliver Sylvester-Bradley, an Operational Member of meet.coop, says, “We’d planned meet.coop before COVID, so it wasn’t really the reason for it. The reason we set it up was simply to offer a co-op, open-source, surveillance-free alternative to Zoom.”

The first major test of the platform was June 2020’s OPEN 2020 conference , which was forced online because of the pandemic. Since that time, meet.coop has grown to include 127 User Members, many of which are multi-user organizations like The TOR Project or Friends of the Earth International, so there are thousands of people using the system.

Sociocratic principles call for co-op members to make decisions — including compensation — by consent. Discussions continue until no member of the circle has an objection. This differs from consensus, where the goal is for everyone to agree (which can be more difficult to accomplish), and simple voting, where minority opinions are sometimes disregarded.

Wouter Tebbens, an Operation Member from the Free Knowledge Institute who lives in Barcelona, says, “Our general modus operandi borrows from sociocracy the GENSET approach of ‘Good Enough for Now, Safe Enough to Try’, where our service in the first year has been a ‘minimum viable product’ good enough for now. But we need to improve it to keep our members happy.”

Like any startup, meet.coop needs to figure out a way to fund their operations and future development. As Tebbens notes, “We cannot realistically ask for venture capital money, not for the values we represent and not for the potential returns that won’t be so much monetary but a reinvestment in the Commons ecosystem.” They currently manage their budget via Open Collective, which makes the whole process transparent.

Meet.coop has also signed up with the Open Credit Network , where members can trade credits for services as an alternative to conventional money. “It’s actually pretty radical to pay for your video conferencing in mutual credit,” says Sylvester-Bradley. “It is an obvious way to save money and transition your spending into the Commons economy.”

Most users sign up with meet.coop not only for their video conferencing service, but also to support the cooperative commons. Matt Noyes, from Colorado Springs, says, “The quality and features are very good — the shared notes feature particularly — but the main reason is to help build out cooperative and open-source infrastructure. The mainstream, surveillance-capitalist platforms will always have the edge when it comes to features and service, but they fail miserably when it comes to building alternatives that cultivate transparency, equality, sovereignty, and solidarity.”

Mike Hales, from Sussex, England, was a User Member who has become an Operational Member. He says, “It’s because I’m an activist, internationalist, organizer-user that I’ve taken up an operational role in developing the co-op’s ‘user side’ and ‘culture side’. Infrastructure is way too important, strategically, to leave it to techies or corporations.”

As more people learn about meet.coop, they expect to see more User Members who join because it’s a cost-effective way to get the job done. Sylvester-Bradley says, “As we scale, we will be able to deliver a comparable service at a lower cost. When we get to that point, it won’t be a matter of ‘ethics’ which makes people sign up — it will be simple utility. Why would you pay more for the capitalist version, which exploits your data, when the surveillance-free, renewable-energy-powered version is just as good, and cheaper too?”

As meet.coop grows, they hope to evolve toward a full-fledged, multi-stakeholder co-op by adding new ways to include users in the decision making process, including improved governance policies, more multi-language support, and a monthly “commons.hour” which they hope will inform and power-up the multi-stakeholder dynamic in the co-op.

“At this moment you could see meet.coop more like a worker co-op,” says Tebbins, “with workers joining through the Operational Member organizations. We want to invite activists, experts and other interested parties to join this process and R&D together on the way forward in multi-stakeholder governance, in an open and documented process that can serve other initiatives to reuse bits and pieces for their benefit.”

For more information about meet.coop and the cooperative commons, or to sign up to become a User or Operational Member, visit https://www.meet.coop/ You can also join the discussion at the meet.coop online forum.

Ray Charbonneau lives in Arlington, Massachusetts, with his wife and their two cats. You can often find Ray and Ruth out on the streets running, but Felix and Phoebe stay

Ray Charbonneau lives in Arlington, Massachusetts, with his wife and their two cats. You can often find Ray and Ruth out on the streets running, but Felix and Phoebe stay inside. Ray is the author of a number of books on running and the editor of The 27th Mile, an anthology that benefits the victims of the Boston Marathon bombing. His articles and stories have appeared in The Boston Globe, the Christian Science Monitor, Marathon & Beyond, Ultrarunning, and in many other national dead-tree publications and landfill-saving electronic formats.