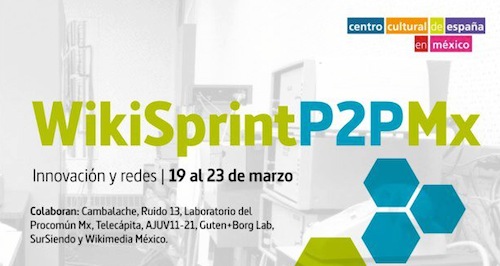 I learned a new word this week: wikisprint. As you probably know, a wiki is a website that allows users to add and modify its content (think: Wikipedia) and to sprint is to run at top speed for a short distance. A wikisprint is pretty much what it sounds like; a short, fast, collaborative burst of activity on a wiki.

On Wednesday, March 20, the first Ibero-American Wikisprint is taking place. Sponsored by the P2P Foundation, the Wikisprint aims to collaboratively map P2P initiatives in Latin America and Spain via local wikisprints around the world.

Open to all, the Wikisprint is seeking volunteers to help collect and map projects, both online and off, that are participatory or collaborative in nature. Examples of such projects include: commons-based peer production, crowdsourcing, participatory governance, open source platforms or communities, collaborative consumption, coworking, open data, distributed infrastructures and more.

Ideally, the wikisprint will also find and map the best collaborative and P2P blogs, social media groups, Twitter feeds, books, articles and audio/video projects in the Spanish-speaking world. Wikisprint volunteers are asked to have at least five P2P initiatives that they can map and describe.

In addition to mapping collaborative and P2P initiatives, the Wikisprint will also serve to connect people and projects and facilitate communication between them.