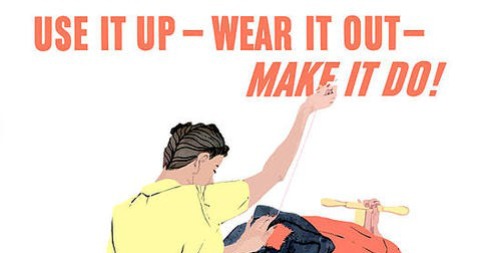 In consumer society, stuff goes quick. Whether it's through planned obsolence, changing fashions, or just because it's plain old plastic crap, our things need replacing a lot. This process of constant commodity renewal locks us into a compulsory work-buy-work lifecycle. But it wasn't always quite so, in times of resource scarcity (even in America!) learning to make do with what you already owned was considered a virtue. "Thrift," I think they called it.

Once again we're in a period of scarcity, not of resources (there's plenty of stuff) but their distribution. Web veteran Meg Hourihan is giving thrift another try in 2012 with a new project she calls Make It Do. Here's how she describes her inspiration:

In December, 2011, something clicked. I realized that going even three months without buying anything would just defer purchases. Going a year would require some real change in how I operated. And those changes could involve some of the other things I’d identified as important to how I wanted to live my life. Also I read Little House in the Big Woods to my four-year-old son and was reminded how little people can have and still lead a very rich life.

She sets an ambitious goal: buy nothing in 2012 but stuff she uses up and can't repair. Since consumerism changes people's expecations, Hourihan had to define her program specifically and adhere to it. It's broken down into different regulations:

There are a few exceptions for experiences like the occasional meal out or movie rental, but that's pretty much it. When she phrases it like that it almost sounds easy – I mean what else do we really need? At the very least following Hourihan on her journey via her blog makes her readers think about where the rest of the things in their lives come from.