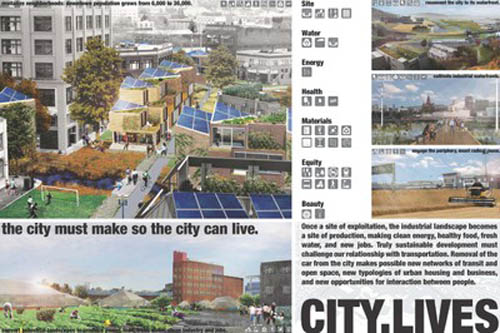 It started with a simple question: What if every single act of design and construction made the world a better place? Yes, what if? Well, quite simply, a paradigm shift of that magnitude would catapult us into a utopia the likes of which we've only previously dreamed. But that's just what the International Living Future Institute aimed at with their Living Building Challenge.

At its root level, the Living Building Challenge lays out sustainability measures for the built environment that go leaps and bounds beyond the standards prescribed by LEED, incorporating elements that bridge the massive (and ever-growing) divide between where we are and where we ought to be, between what we have and what we need. The resulting methodology is fully scalable to accommodate anything from a single park to an entire community and is fully inclusive in its consideration of the people, land, and every other element inherent in a built environment project.

Now, with Living Building Challenge 2.0 in full gallop, the Institute has created not only a building philosophy and certification mechanism, but blazed a trail into a shareable future that leaves no one behind thanks to its appreciable consideration of social and economic justice issues. Seven focus areas — Site, Water, Energy, Health, Materials, Equity, and Beauty — break further down into 20 so-called Imperatives, each training its sights on a particular part of the sum in order to make the whole that much greater.

As part of the Living Future 2011 conference, a Living City Design Competition — staged by the Institute in conjunction with the National Trust for Historic Preservation — “called for teams worldwide to create powerful visualizations of how existing cities might be transformed to achieve and transcend the Living Building Challenge 2.0, the built environment’s most rigorous performance standard.” And they heeded that call. With projects looking at 69 cities in 21 countries, more than 80 teams submitted entries that addressed changes to existing urban ecosystems in order to meet the Living Building Challenge 2.0 Imperatives. The winners were announced recently having been judged by a seven-member panel “on their ability to capture the attention and imagination of a broad audience and reassess assumptions about a future filled with high-tech, ecologically dislocated cities.” 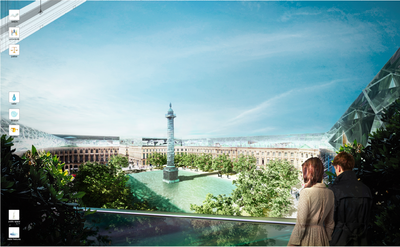 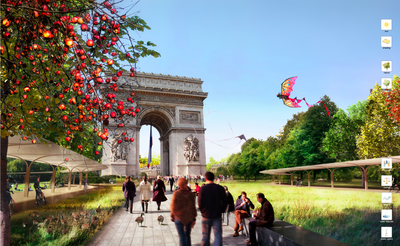 Paris takes a leap into a sustainable future in this grand prize-winning project.

With a reimagining of Paris, Daniel and Maximilian Zielinski of the UK took home the $75,000 grand prize. Of their pragmatic, respectful work, the jury observed, “Daniel and Maximilian crafted an elegant interplay of design solutions with very real-world strategies. It achieved the end goal in a way that welcomed and incorporated the present, and instead of simply showing how the ‘natural world’ might colonize urban environments, it created fertile ground for people thriving in partnership with nature.” 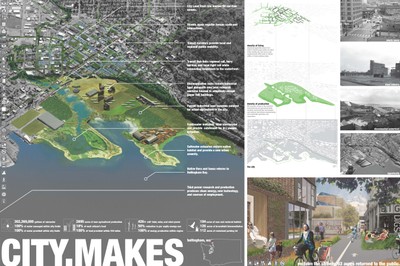 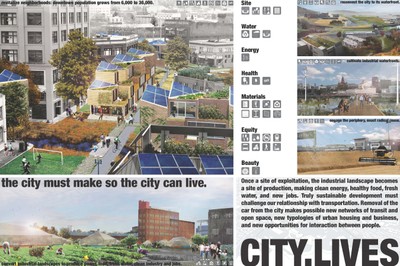 As evidenced in the second place entry, when a city makes, a city lives.

Second place (and its $25,000 award) went to team Atelier G40 from Bellingham, Washington. Their “City Makes. City Lives.” project wowed the jury with a strategic approach to a city's urban transformation that was all the while rooted in “a deep cultural understanding” of the place.

In previous iterations of the competition, an additional $25,000 award was presented to a team that leaned firmly into historic preservation within its futuristic vision. This year, though, five leading entries each met that mark so the panel divvied up the prize with $5,000 going to each team. 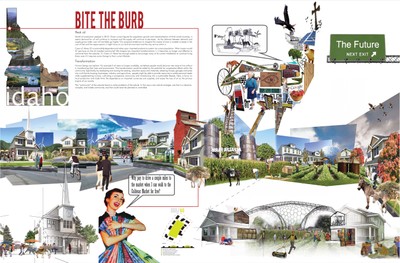 As drawn here, Coeur d'Alene thrives after the oil rush.

Taking home the Can-Do Award, a University of Idaho student team used their “Coeur d’Alene After the Reign” project to explore a post-oil world. What they saw was a community filled with health, support, and meaning. 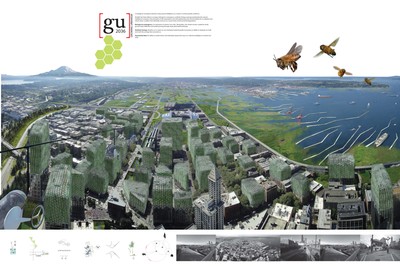 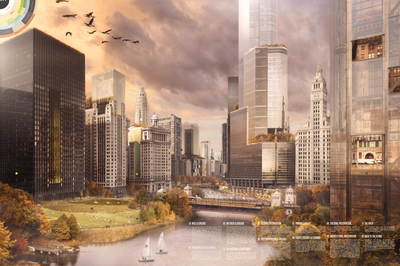 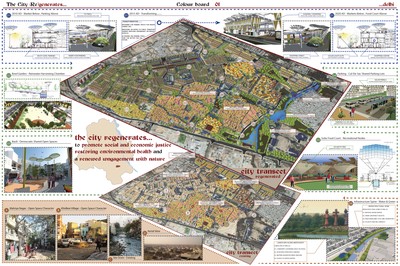 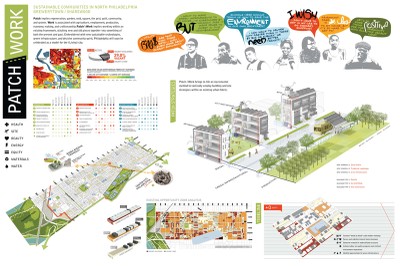 Top: A plan exists for New Delhi to embrace its diversity. Bottom: Here, Philadelphia wears a shareable coat of many colors.

Two other teams shared the Cities That Learn Award — Ashok B Lall Architects of New Dehli, India and Team OLIN of Philadelphia, Pennsylvania. In particular, both projects chose social justice and cultural issues as anchors in their visions. Working from that perspective, both “Delhi (Re)Generates” and “Patch\Work Philadelphia” took societal diversity by the reins and guided them into a future that saw the collision of cultures in a new, more nuanced light.

Four additional submissions earned nods for the People's Choice and Living Building Community choice awards. "Chamizal Connection," an urban regeneration project for Mexico City by Maria Alvarez and Norma Sanchez, was anointed in both categories. Team Portland Ecodistricts and their "Symbiotic Districts: Towards a Balanced City" also nabbed a People's Choice award while "Fight for Your Right of Way" by The Miller Hull Partnership and "Pioneer Square — Living Green and Blue" by International Sustainability Institute each won Living Building Community choice awards.

In both its philosophical implications and its practical applications, Living Building Challenge 2.0 allows architects, developers, urban planners, environmental activists, and justice advocates to all have seats at the table, coming together to imagine and build sustainable, shareable communities for our collective future. Quite a challenge, indeed. But, what if we all, together, rose to meet it? Yes, what if?