Life is only borrowed: The LEILA borrowing shop - Shareable
Skip to content 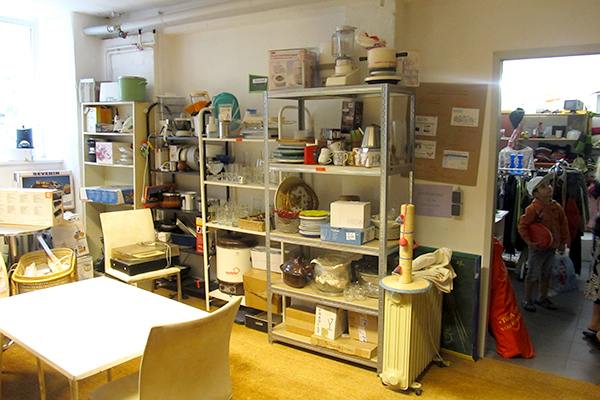 What's the best thing about being an editor for VIENNA WÜRSTELSTAND? Is it the groupies? The free drugs and the behind the stage after parties? No, far from it.

It's the part where people open their doors, invite you inside of their little space in this city, their ideas and what they believe in, and now and again, if we’re lucky, their dreams on how they want to change the world for the better.

And this is exactly what happened when I met Simon from LEILA Leihladen – Vienna's first "borrowing store".

He welcomes me into the former restaurant, of which only a few chairs, tables and bar is left. The old wooden floor could tell a million stories of long nights and heavy drinking, I guess. But it’s about to be occupied by a noble, potentially revolutionary, idea.  Leila is seven people with a mission. Their philosophy is as follows:

" First and foremost, it's about using fewer resources. Who needs a garden hose all year round or a thermal blanket? So instead of buying, why not simply borrowing them for the time you need it and giving it back afterwards? That's better for your wallet and for the environment. Secondly, we're also into society re-learning how to trust. We find that we’ve lost the ability to trust our fellow humans quite a great deal in the last few decades. Borrowing promotes trust as both sides of the deal have to rely on each other."

So how the hell does this whole borrowing thing work, you ask? Firstly, you have to become a member, which will set you back about 36 €, or the reduced fee of 24 € per year – the Leila team leave it up to the customer to assess which fee they can afford. Then you can check out the library of things in stock (from a drill, books, to underwear- just joking you dirty bastards) on their online store and check if the items you so desire are in store. All that’s left after this is to reserve the item and pick it up. Every item comes with a time limit, apt to its usability. Like the whole concept, it’s that simple and god damn empowering.

While the idea of a ‘sharing economy’ is not new, the trend has only recently been gaining momentum – The disposable lifestyle of buy something, buy the same thing a day later is so 2010.

And of course, it has radiated from the city where everything grows freely and organically, including their underarm hair and ideas – Berlin.

In Berlin, the first Leihladen opened up in June 2012 and was of inspiration to the Viennese borrowing gang.

"We love the concept of bringing people together to simply share.’

But the Viennese team are doing things a little differently.

‘In Berlin, there's no contracts people have to sign whereas in Vienna there are. Berlin doesn't have a membership fee, but we do.

However, the same goal is shared – ‘to unify people by sharing, and to make it easier for both your budget and nature.’

The grand opening is not until May 23rd, however their already in the running for an award.

The concept earned LEILA a nomination for this year's Social Impact Award. Together with 12 other Austrian start-ups or projects, they're in the race for 4000 € prize money. Call me biased or hypnotised by Simon's honest eyes, but I personally believe at lot in the idea of LEILA. The guys and girls could do a lot with 4000 bucks, so if you believe in the concept as much as we do, vote for the Leila team here.

And to be part of the grand opening and witness the birth of Vienna's first borrowing shop – food, drinks and music included – turn up on May 23rd.

By the way, if you want to start your own LEILA, Simon and the gang are there to help:

"Our vision for Vienna is that every district gets its own LEILA. It's a neighborhood thing, so the more the better."

I can already hear myself yelling it to my lovely wife now as I walk out the door, “just going down to the local Leila, be back in a sec’”