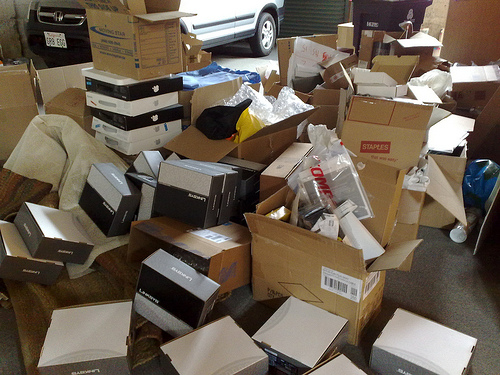 Last time around, I shared with Shareable readers some simple steps to zero waste – how my family has “designed” our home (and life) to only create one bag of garbage every two years or so. While the “bag of garbage” aspect was the hook in that story, the real message inside is the lesson that “waste” is a verb not a noun. Now, it has been a long time since high school English class – What’s the difference? (Thank you, Wikipedia …) A verb is an action whereas a noun is a thing. As it pertains to waste:

Waste as the thing we take out to the curb would not exist if waste as the countless actions (or inactions) we take each day were better thought out to minimize … waste – both the verb and the noun!

Let’s clear up a few misconceptions about what my family's zero waste philosophy means:

We are conscious of our place in the world and always strive to lessen our impact. The best way we have found is to seek out waste and reduce it as much as possible. Our key learning from all of this – the old adage is true – less is more. You can live better with less. Let’s look at some examples:

Clutter: a confusing or disorderly state. Well, who would want to live there? Yet, many of us find ourselves living in a:

So what do we do to solve all of this? When physical clutter becomes a problem, buying a bigger house or getting a storage unit are popular responses. The first means you pay the realtor a set percentage of the value of your house and you get to spend the next 6-18 months of your life living out of a cardboard box. The second means you rent an “extra room for your house” and pay money to an industry reputed to be larger than Hollywood and growing, the personal storage industry. We could do either or both, OR simply look at the clutter and reduce it, and look at our lives and reduce the actions/inactions that led to the clutter in the first place. 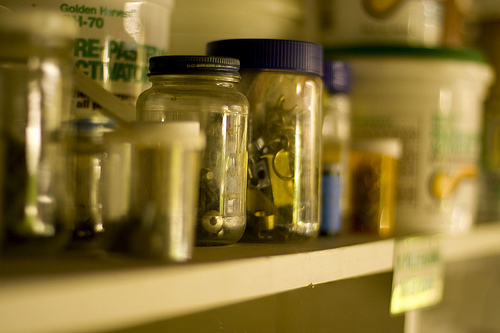 Let me introduce you to some of my friends; they are called shelves. I like my friends, the shelves, for many reasons, but primarily for one simple, albeit analytical reason: I pay property taxes based on the square footage of my home. A shelf with four levels can hold four times as much stuff within the same square footage as that same space without a shelf. Shelves help reduce my property taxes because, without them, I would need a larger house to contain the same amount of stuff! Become friends with shelves.

But before you do that, there is probably a lot of stuff that just needs to go … old kids stuff, a flip cellphone circa “Titanic release,” and a bicycle in the garage used solely as a well-engineered fly catcher for a battalion of spiders. It all has to go – but not into the garbage because that would be a waste. If you think you can sell it, there are always our “other friends” (like yard sales, Craigslist, and eBay) to help with that. You can also share it with friends or simply give it away to someone who can make use of it.

For stuff that is too far gone, check with your local city or municipality for recycling programs. Cellphone and bicycle recycling are programs dear to my heart, as both have great impacts in Africa. A recycled cellphone can reduce the strife over coltan, a mineral used in cellphone manufacturing, which is causing African nations to implode. Bicycles shipped to Africa can allow a health care worker to see more patients in a day and save lives! When you know the facts about the good things your stuff can do, and what the costs are of it just sitting there, then zero waste seems the only sane thing to do.

Mental clutter refers to the simple fact that we just have too many things to do and so little time to do them. I have lived that life and had the good fortune to hop off the treadmill early. And I haven’t looked back. This includes a lot of different things, but the smartest decision I ever made was to eliminate my daily commute. I did the math and figured out how much time I spent going from A to B every day, week, month, year, decade and said enough was enough. So maybe I don’t make as much money as I used to but I also have cut my expenses greatly by being in a one-car family (huge savings), having my home be my office (put those square feet to work for you), and simply getting back 10-15 hours each week! What would you pay for another day added to your week?

Commuting is to mental clutter what all the junk in your house is to physical clutter. 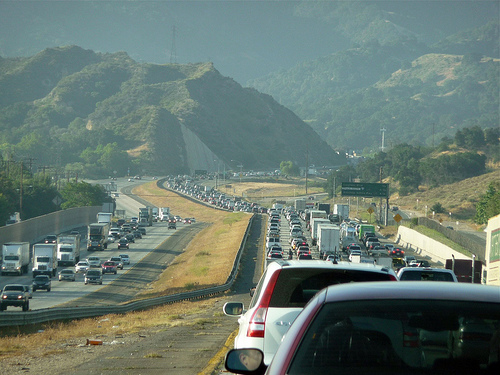 Commuters trying to get in and out of Los Angeles, California, face this sight on a daily basis. Photo credit: Jeff Turner. Used under Creative Commons license.

Ridding yourself of one or both will make your life better. And, most importantly, since my daughter has started school, I get to walk her to school most days. I don’t have to. I get to. And no amount of money is worth missing out on that.

Priority clutter is a more macro issue, but it can sneak up on you and you need to be aware of it. I will admit that, when decision points come up in my life, I rely more on my knowledge of statistics than I do on New Age philosophies. Nonetheless, we do need to see the forest for the trees and not lose sight of what is really important. We can live our lives so focused on getting stuff and doing stuff that we often forget what makes us happy.

I‘ll give you an example my wise wife brought into our lives years ago that has benefitted our family greatly. Every holiday season began in late November with some “ill-placed” birthdays, then leading into holiday gatherings for this side of the family and then that, multiplied by my and my wife’s families, then work gatherings (all to be reached by snow-swept highways), end-of-year deadlines, and decorating, and so on. The end result was more often a holiday season of exhaustion rather than relaxation. We were traipsing all over the province doing what was expected of us, not necessarily what we wanted to do. So, having learned our lesson, we made a new rule that we would attend “this side of the family” one year and “the other side of the family” next year. Certain pre-selected dates were ours alone and no invitation from royalty or guilt-inducing acquaintances would break that vow. The end result is a holiday season we look forward to rather than dread, one that feels like a holiday rather than a chore. Our family shares quality time, which is the most important priority and the best gift we get each year.

Admittedly, all of this is a work in progress and I plan to bring sharing into the mix even more in 2012, but our zero waste life has made great strides in reducing the physical, mental, and priority clutter in our lives.

I have only just shared a few examples of how to “de-clutter” your lives and live better with less. I’d be curious if readers would share some smart, simple solutions they have brought into their lives that reflect the less-is-more approach. Check back in our comments section and give them a whirl. Trying is the most important part. Good luck, and have fun!

Shawn Williamson is the ZERO WASTE guru for Shareable, and a Brooklin, Ontario-based Environmental Consultant who specializes in quantifying the benefit of improving sustainable practices in any organizational unit –

Shawn Williamson is the ZERO WASTE guru for Shareable, and a Brooklin, Ontario-based Environmental Consultant who specializes in quantifying the benefit of improving sustainable practices in any organizational unit – businesses, communities or families. He shares his musings on his ongoing experiments in living and working ZERO WASTE at www.baleengroup.com>.