This article originally appeared on the Monitor Institute’s website. It is reprinted here with permission from the author.

For six years, the RE-AMP network — comprising 125 non-profits and funders across eight states in the U.S.’s upper Midwest — has been focused on just one audacious goal: reducing regional global warming emissions 80 percent (from 2005 levels) by 2050. And it’s working.

Much has been written about the power of networks to increase social impact. For non-profits and funders that want to go deeper on the tactics of how to build an effective network, it is useful to understand how RE-AMP has done it. RE-AMP’s process was well-informed by decades of thinking related to systems dynamics and group facilitation. But what is new is the way in which RE-AMP combined these “best practices” with “next practices” to create a robust, resilient, and high-impact network.

The results speak for themselves. In just the past few years, the network has helped legislators pass energy efficiency policies in six states; promoted one of the most rigorous cap-and-trade programs in the nation; and halted the development of 28 new coal plants. The network has also built the capacity of regional activists, increased funding for its cause, created a number of shared resources, and developed stronger relationships between funders and non-profits. 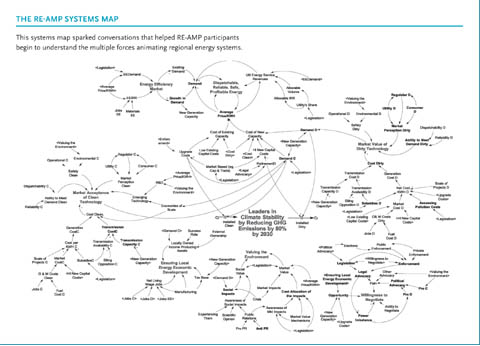 Understanding just how RE-AMP accomplished this can give other groups interested in building a collective network to address a systems-level problem a roadmap to follow. During its two-month study of RE-AMP, Monitor Institute identified six key principles that RE-AMP members followed in building their network:

Heather McLeod Grant is a Senior Consultant at the Monitor Institute in their San Francisco offices. She is a the co-author of Forces for Good: The Six Practices of High-Impact

Heather McLeod Grant is a Senior Consultant at the Monitor Institute in their San Francisco offices. She is a the co-author of Forces for Good: The Six Practices of High-Impact Nonprofits (Wiley, 2008), which was named a Top Ten Book of 2007 by the Economist. Additionally, she serves as an advisor to the Center for Social Innovation at Stanford University’s Graduate School of Business, the Center for the Advancement of Social Entrepreneurship at Duke University’s Fuqua School of Business, and to leading nonprofits and foundations. She is a former McKinsey & Company consultant and a co-founder of Who Cares, a national magazine for young social entrepreneurs published from 1993-1999. Heather teaches at Stanford, and speaks and presents widely at industry conferences on Forces for Good, social entrepreneurship, nonprofit leadership, and strategic philanthropy. She has been published in the New York Times, Inc., the American Prospect, and Alliance, and has appeared on CNN and NPR. Heather serves on the Advisory Boards of the Stanford Social Innovation Review and the National Civic League. She holds an MBA from Stanford University and an AB from Harvard University, and resides in the Bay Area with her husband and daughter.