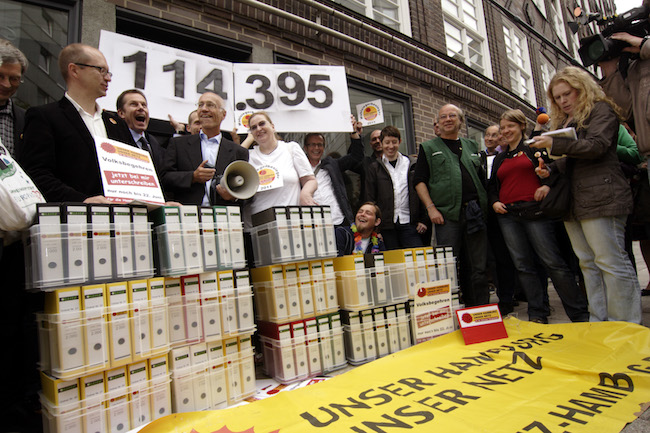 From 2000 to 2014, the energy infrastructure of the city of Hamburg was mainly in the hands of private energy monopolies such as Vattenfall and E.On that controlled most of Germany's electric power infrastructure. These companies had a strong interest in utilizing their coal and nuclear power plants as long as possible, thereby obstructing a shift to renewable energy. Moreover, they were reluctant to provide equal access to small power providers and invest in a smart grid that allows more effective management of variable, distributed power inputs. Owing to these factors, progress to lower Hamburg's greenhouse gas emissions was being stalled. What could residents do?

A citizen's movement emerged in Hamburg for the city to buy back the energy infrastructure. In spite of strong opposition from the ruling party, the movement successfully organized for a referendum to be held on the matter, which passed in 2013. As a result, Hamburg bought back the electric distribution network from Vattenfall in early 2014, signed a contract to buy back the gas distribution network from E.On by 2018, and is negotiating the purchase of the district heating network by 2019.

The electric distribution system (Stromnetz Hamburg) is now owned 100 percent by the city of Hamburg, which means that its activities are overseen by representatives of the city government. A consumer's advisory council has been formed, which has been holding several meetings annually since 2014. In order to establish more democratic control of the entire energy distribution network, a multistakeholder advisory council — comprised of representatives of all major political parties as well as the organizations that campaigned for the recommunalization of the energy infrastructure – has been established.

Contracts and other information concerning implementation of the referendum

Bylaws of the Energy Advisory Council

This piece is an excerpt from Shareable's upcoming book, "Sharing Cities: Activating the Urban Commons." Keep an eye out for the public release of the book this summer.

Header image of citizens submitting signatures at the City Hall of Hamburg, petitioning for the referendum for the municipal government to re-acquire its privatized energy infrastructure, in 2011, courtesy of Bund für Umwelt und Naturschutz Deutschland