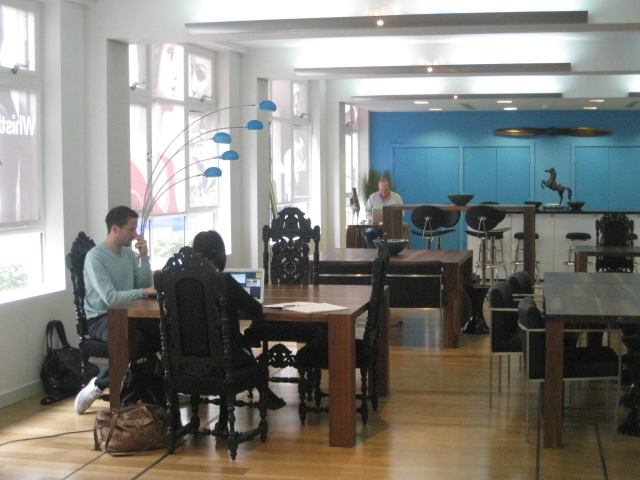 and launched the organization Hub Culture to provide a meeting places for the global urban communities described in the book.

Over time, Hub Culture developed web tools to facilitate collaboration among members, organized events and activities, and established "Pavilions" in cities that range from London to Hong Kong to Punta del Este to Miami to San Francisco.

In January 2007, the company released Ven, a global "knowledge" currency first available in Facebook — now traded at 10 Ven to every dollar. In the following Q&A, Stan Stalnaker talks with Rachel Botsman about the difficulties of sharing and the power of the commons, digital and otherwise.

Rachel Botsman: We look at how look how social networks and web technologies are giving new relevance to pre-industrial behaviors such as bartering, swapping, trading, social lending, and so on, that require marketplace structures. Are we going back to "human to human transactions" between producer and consumer, seller and buyer, borrower and lender, neighbor to neighbor? What are your favorite examples of this in action?

Stan Stalnaker: We see the world evolving into a complete peer-to-peer system, beyond just communications — in finance and eventually in energy as well. This means that the ability for individuals to transact with each other, at the mass-micro level, will transform how we value our sense of worth and of selves. The explosion in virtual and digital communities is driving this, and layered over existing "real-world" relationships, creating a transactional fabric that will soon dominate the economic system.

In the end, I think we will see an emergence of an economic relationship and fascination with networked efficiency that comes to dominate our worldview. This fits well with the sustainability model we need to develop to dovetail resource availability with demand; and not a moment too soon.

RB: Scott Heiferman (founder of MeetUp) talks about how we need to “use the internet to get off the internet." How do you think the relationship between online interactions and offline communities will evolve in the future?

SS: I think the idea of online and offline, as disparate entities, will cease to exist, and the conversation will turn to whether you are connected or not, intelligent or not. Intelligent, connected systems will be "on the grid" and anything that isn't will be starkly evident. Everyday objects, walls, rooms, roads, autos, even your kitchen table will eventually be intelligent and connected — we will stop seeing "devices" as connection objects and begin to move our "presence" between all sorts of objects.

RB: How do you think our belief in the digital commons changed our relationship to collaboration and sharing?

SS: I'm not sure that the digital commons has changed the relationship to collaboration and sharing as much as people's own abundant desire to do so has made this happen. The power of open source, especially in creative commons and API worlds, is immense, but the natural inclination for people is to give and to share when something is in abundance. It is when resources become scarce that the hoarding and conniving begins.

As such, the abundance and ubiquity of cheap connectivity and content, the ability to generate and share this easily and freely, is what is driving collaboration and sharing — abundance. Without it, a commons would be much harder to maintain.

RB: You talk about the “co-op as the kind of economic system we always say we want but can't bring ourselves to build.” Why do think the masses are weary of sharing and communal structures? How do we overcome those stigmas?

SS: I don't think masses really exist anymore — its all just people, and people are tired of the hierarchies, except for when hierarchies suit them. In some cases, the legacy around the nomenclature is the biggest obstacle – all this sharing and communalism reminds people of state-led socialism, which carries a lot of baggage. The idea of market-led network socialism is a new idea, and it's very young, very hip — and not nearly the same thing. Both threaten existing power structures.

In some ways, I think the sharing and communalism is a mirage — because most individuals don't own platforms, and platforms are the basis for this new winner-take-all "communalism" on the corporate front. On the other hand, platforms that generate Cambrian explosions in innovation (such as the iPhone, Facebook and Paypal open APIs, Mozilla) can be viewed as micro-wealth generators for those who act on the platform.

These platforms create ecosystems which help sustain life — like coral reefs. It’s hard to argue against coral reefs, as they support great bio-diversity. Platforms that generate tech diversity are like reefs, and should be supported, but we have to be aware of whether they are winner-take-all systems at large.

RB: As you are probably aware, Elinor Ostrom recently won the Nobel Prize for Economics. “Economics is not really fundamentally about markets," she has said, "but about resource allocation and distribution problems.” What are your thoughts on this?

SS: I think that is pretty smart. My recent Harvard Business Review article on "The Next Evolution in Economics" addressed a similar idea. I think we will come to understand that economics is really about efficiency, and efficiency is best addressed when approached in bio-states — the states closest to nature. When we come to see economics as a biological function in a holistic system, we will be much closer to understanding how economics really work — and how important it is to account for externalities in the system as much as possible. Resource allocation and distribution problems are both functions of efficiency — and good economies work efficiently. Great economies will be those that harness externalities to create wealth, not just at transaction points but over the life cycle of an "economic project."

RB: What do you think are the role of social or complimentary currencies (time banks, LETS, Ven, etc.) in the future? How will mass consumers get their heads around the idea that money is not the prime, or only, means to get what they want?

SS: Well, of course, we like social currencies… having invented the first global digital social currency, Ven. Ven helps people earn, share, and trade on knowledge and favors, and is linked to other currencies — whether digital or “real.” I think there's a tidal wave of change coming in how we view finance and the very idea of money — and while it won't be replaced, we'll find lots of other ways different than cash to get what we want.

RB: All around us individuals are banding together to create their own solutions to satisfy their wants and needs and cutting out wasteful middle men. Why do you think this is happening? What industries do you think are particularly vulnerable to be disrupted by this model?

SS: It’s all about efficiency, and generally A to C is a more efficient path that A to B to C. This puts power in the ends of the spectrum: resource producers and resource consumers. This does not bode well for the white-collar middle classes, but does bode well for logo designers, farmers, and Wal-Mart shoppers.

RB: Thought leaders like Kevin Kelly and Jeremy Rifkin have posited that the very idea of ownership will be obsolete in 5 to 10 years time. People will value "access over ownership." What are your thoughts on this?

SS: Wow. That would be a big change. The entire global economy is built on ownership, especially in terms of property. I can see it for most goods and services, but for property, that would be a fundamental shift so large it would require a scale of catastrophic destruction in value that I find hard to imagine.

For goods and services though, why not? Hub Culture Pavilions are disrupting this in the office sector — offering pay as you go usage and membership for "workspace" that is typically owned or rented. Our technology allows us to reconcile a high number of members with a wide class of services. Two years ago people had trouble imagining that. Maybe in 10 years, property will seem as obsolete to us as an "office" does to me now.

RB: Outside of Ebay, Freecycle, and Wikipedia, what are other examples peer-to-peer transactions and self-moderation have you seen that work?

SS: Kiva and Prosper are obvious examples. I think the iPhone and its 65,000+ and counting apps are an example of this — the distribution of music, content, even YouTube, Paypal, and Skype. Anything where people can offer something of value to others, and not get charged, in a hierarchy lends itself to this model… couchsurfing.com, private jet sharing. We are seeing it with the devolution of venture capital models, replaced increasingly by self-funded or crowd-funded models — and at the high end, a growing reliance on private equity, which are essentially elite private social networks.

A slightly different version of this Q&A was originally published on the Hub Culture website.