Is employee ownership about to have a moment? - Shareable
Skip to content 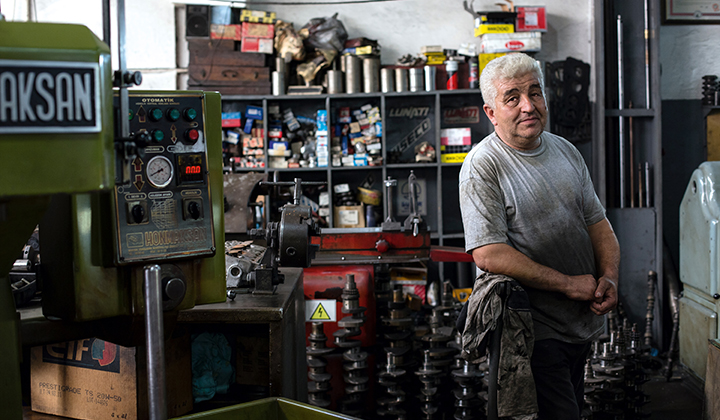 Photo by Alev Takil on Unsplash

The move to advance employee ownership is gaining momentum. As employee-owned businesses have grown steadily over the last decade, demographic trends and a surge of interest in a more equitable economy have helped put these business structures on the national agenda.

One key factor is a phenomenon known as the ‘silver tsunami.’ An unprecedented number of small business-owning baby boomers are going to be retiring over the next couple of decades, and many of them don’t have succession plans. To avoid the potential closure or displacement of the 2.34 million boomer-owned business which are at risk, cities, states, and even Congress have begun exploring the option of employee-ownership as a solution.

“Within the next 20 years we’re going to see a massive turnover of business assets in this country due to baby boomer retirements — something like $10 trillion,” Zen Trenholm of the Democracy At Work Institute told Shareable. “That’s why we’re seeing so much action both at the federal level and now much more significantly at the local level.”

The Democracy at Work Institute (DAWI) has played a key advocacy and advising role in many of the efforts to advance employee ownership on both the local and national level. For example, just last year the Main Street Employee Ownership Act was introduced in the Senate by Sen. Gillibrand (D-NY) and passed with bipartisan support. The law is intended to level the playing field between traditional firms and employee-owned businesses by making it easier for the latter to secure loans and capital — currently a significant barrier to the creation of more co-ops.

The legislation will improve access to capital and technical assistance for employee-owned businesses by financing the sale of businesses to their employees and by working with Small Business Development Centers across the nation to provide educational and training resources.

Another example of employee-ownership policy going mainstream came last month when Sen. Bernie Sanders (I-VT) re-introduced two pieces of legislation to Congress that focus on strengthening and growing the employee-ownership and worker cooperative sectors across the country.

The establishment says there’s no alternative to an unfettered capitalism that produces huge CEO bonuses while millions are paid starvation wages. They are dead wrong. Instead of more tax breaks to profitable corporations, let’s expand employee ownership. https://t.co/AOeqYmctem

The WORK Act would provide more than $45 million in funding for states to establish and expand employee ownership centers that provide training and technical support. Similarly, the U.S. Employee Ownership Bank Act was introduced to create a public bank that would provide $500 million in low-interest rate loans to help workers purchase businesses through an employee stock ownership plan or a worker cooperative.

Public sentiment is on the side of these initiatives. Seventy-two percent of Americans in a recent poll said they would rather work for an employee-owned company over one owned by investors or the state. And this support transcends party lines, with 74 percent of Democrats, 72 percent of Republicans, and 67 percent of Independents polled expressing support for an employee-ownership model.

Federal lawmakers are actually a bit late to the party. Dozens of cities across the country, it turns out, have been hip to the growth of interest in worker ownership for years.

New York City has been actively working to strengthen the worker cooperative sector since 2015. The Worker Cooperative Business Development Initiative (WCBDI) — a partnership between the NYC Department of Small Business Services, the New York City Council, and 13 partner organizations — offers New Yorkers innovative ways to overcome economic and social inequality through the formation of worker cooperatives.

The initiative has invested millions of dollars in strengthening the cooperative sector and facilitating the creation and transition of small businesses into worker cooperatives. In fiscal year 2018, the NYC Council invested $2.9 million to provide outreach, education, and ultimately, assistance in the formation of 16 worker cooperatives in New York City — with 32 more on the way.

Much of the on-the-ground work taking place within the WCBDI program is being done by organizations like The Working World and the Democracy at Work Institute — organizations that have been focusing on worker cooperative development and economic democracy for years.

“Over the last 30 or 40 years we saw a lot of worker cooperatives being formed to give people an opportunity to exit the mainstream economy,” Trenholm told Shareable. “But now, and particularly since the recession, we’re seeing more groups traditionally marginalized by the mainstream economy use employee ownership as a strategy towards building equity. It’s a tool that can actually help people enter the economy on their own terms.”

The goal of achieving equitable economic development through employee ownership and management is what’s driving the initiatives put forth by cities like New York. Having an ownership stake in a business means that workers get a share in the profits, something that can make a huge difference when it comes to income levels. Employee-owned businesses average 33% more in earnings than their counterparts in similar industries, according to a 2017 report released by the National Center for Employee Ownership.

Many of these initiatives take the extra step to explore the option of employee self-direction as well, which take them from what are generally referred to as Employee Stock Ownership Plans (ESOPs), to full-on worker cooperatives. Because worker cooperatives are also managed democratically, worker-owners have more control over their own compensation and many of the decisions that shape their day-to-day work life. And it’s not just ESOPs that have been growing — the number of worker cooperatives in the United States has been steadily growing over the last twenty years.

New York City is one of the pioneers when it comes to municipal support for cooperatives, but it is by no means the only example.

Berkeley, California recently set up a program aimed specifically at retaining and supporting small businesses at risk of closure or displacement by converting them into employee-owned businesses. The city has been reaching out to baby boomer-owned businesses to produce feasibility studies exploring what it would take to successfully transition the business to employee ownership. These studies run around $5,000 each and are subsidized by the city, which is considering adding another $80,000 next year to the $30,000 originally allocated.

Similar efforts are happening across the country, from Austin, Texas to Madison,Wisconsin to Cleveland, Ohio, among others. A particularly innovative example of municipal support for employee-ownership is a multi-city initiative known as the The Shared Equity in Economic Development (SEED) program. SEED is a partnership of the Democracy at Work Institute and the National League of Cities and aims to prepare city leaders from four major U.S. cities in building equitable economies using democratic business ownership.

“We’re looking at the potential loss of small businesses, particularly of minority-owned businesses, and thinking, ‘What are the tools that we have in toolbox right now to stave off this loss and to ensure that as our cities grow that prosperity is shared?’” Trenholm said.

The SEED Fellowship is the only U.S. program that brings together leaders from multiple cities to develop and implement employee ownership initiatives. This year’s cohort consists of Atlanta; Durham; Miami; and Philadelphia. Through city and grant funding, the program has assembled teams of fellows in each city who focus on one issue around economic and community development for the year, putting an emphasis on low-wage communities, women, immigrants, people locked out of the job market, and communities of color.

“The work that I’ve been doing with all four of these cities is to help preserve their long-standing businesses by helping retiring business owners sell to their employees, keeping both businesses and the jobs anchored in the community,” said Trenholm.

Some heavily rural states have also been active in cooperative development. Vermont and Maine have partnered with nonprofits like the Vermont Employee Ownership Center, the Cooperative Development Institute, and the Democracy at Work Institute to help spread economic democracy in a variety of ways. Their efforts range from helping employees become owners in breweries, farms, and fisheries to assisting manufactured housing park residents in becoming park owners.

“Rural communities don’t always have the kind of resources that you see you in bigger cities, so their approach might be a countywide effort, or a statewide effort,” Trenholm told Shareable. “But you’re still working on the same thing: How do we make sure business owners can retire and ensure that their employees are set up to become the owners?”

The success of the cooperative sector in regions like Italy’s Emilia-Romagna, as well as many other examples across the globe such as the Mondragon cooperatives in northern Spain, prove that employee-ownership can be successfully mainstreamed within an economy.

In Emilia-Romagna, cooperative businesses account for no less than thirty percent of the region’s GDP. At the same time, per capita income is about 35% above the EU average and the region bounced back from the 2008 economic recession better than the rest of Italy. Of course, the successes of employee-ownership in this region are a result of its own unique circumstances, but there is still much to learn from these international examples.

Despite bipartisan support for employee-ownership, at some point the movement is going to come to heads with economic power brokers who have no interest in facilitating a transition to a democratically-owned and run economy. If the movement for employee-ownership and economic democracy is ever going to become a significant force within the political and economic landscape in the U.S. — a force that can eventually replace the predatory capitalist model that has taken hold with a democratic and just economy — much more organizing must be done.

At this point, as in much of history, perhaps the only force that will be able to successfully challenge those benefiting from our current system is a well-organized grassroots movement with serious numbers behind it. Currently, the seeds for this kind of movement are being sown across a number of cities, states, and portions of Congress — but it remains to be seen if today’s budding cooperative moment can turn into a mainstream movement.