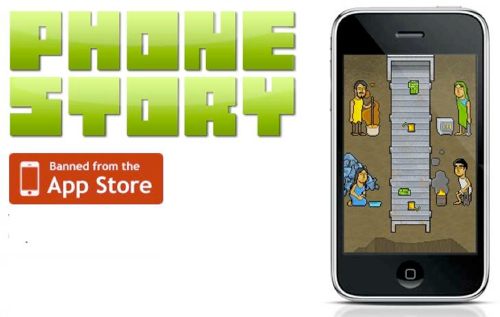 Phone Story, a new iPhone game app, was launched then quickly banned today by the iTunes App Store. It’s an educational game that takes players on a tour of the darkside of iPhone manufacture — mining of blood minerals by children, toxic recycling centers in developing nations, suicide-inducing working conditions of Chinese factories, and more.

The reasons for banning given do not seem to hold up if you understand the game and read the maker’s response here. But I don’t want to talk about the banning per se because it’s been covered extensively and is to be expected in a closed system. Corporations and their products are not democratic. And Apple is definitely not democratic. This is not news.

What’s interesting to me is the game itself, which is a market campaign in the form of a iPhone app. That’s a first as a far as I know. A little background — market campaigns are a stock strategy used by activists to get corporations to behave responsibility. Basically, a market campaign publicly outs a corporation’s bad behavior in order to get them to change.

Apple has been a target of market campaigns before, but they don’t seem to have been particularly effective. The best market campaigns dramatize corporate crimes in such an effective way that it captures the public’s imagination. An example is ForestEthic’s Victoria’s Dirty Secret Campaign which featured a full page ad in The New York Times of a lingerie model with a chain saw. This dramatized how Victoria’s Secret and the catalog industry’s promiscuous catalog mailing help drive deforestation. The ad and two year campaign was so effective that Limited Brands, the parent company of Victoria’s Secret, introduced an industry-leading responsible paper sourcing policy and became an advocate for similar policies within the catalog industry.

So, it is a shame that Apple banned this app, but the news isn’t Apple’s draconian ways, it’s the loss of the potential for social change. And the birth of a new tactic for activism. That’s one clever app. Phone Story is immersive activism — it actually takes players inside a simulation of the crime that’s running inside the product of the crime. Marshall McLuhan would have a field day. My bet is that we’ll be seeing more of this soon.