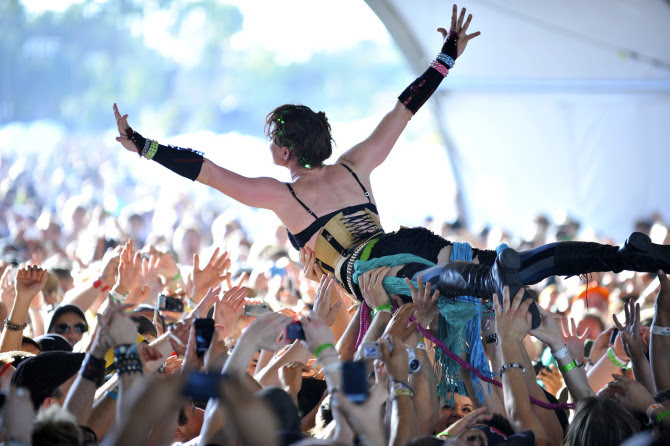 Amanda Palmer is co-founder of the band, The Dresden Dolls, who has built a hugely successful music career based on the gift economy. When you go to her webstore, you see that paying for her music is voluntary: "If you’re broke – take it. If you love it, come back and kick in later when you have the money." Her TED talk on the Art of Asking — the idea that, in a hyper-connected world artists can support themselves by offering their work up to a network of reciprocal generosity — has been watched by millions.

When Amanda came to New Zealand last year, there was a chain of events that I found pretty amazing, but were seemingly pretty typical in her extraordinary life. She had connected with a local person here in Wellington (through the Internet, surprise surprise) who offered to help her put on a show. Before she even landed, there was hype through the whole city (spread, of course, through social media and word of mouth). By the time she got here, there were enough excited people that she got off the plane and led a jubilant ‘ninja parade’ through the streets. After being contacted by someone I didn’t know, I volunteered to help organise the show and, with 48 hours notice, Amanda performed to a packed crowd of 150 people in my friends’ living room.

When I’m not helping organise last-minute shows and participating in ninja parades for visiting musicians, I’m part of a team of open-source developers and activists building Loomio, an Occupy-inspired app for consensus decision-making. Amanda’s attitude toward the sharing economy has deeply informed our thinking about how we resource the Loomio project. So, this year, I reached back out to her, as artfully as I could, to ask if she could help us by sharing her thoughts about sharing.

Richard D. Bartlett: You’ve proved that the gift economy can work. How did you develop the courage to trust your crowd so deeply? Was it a gradual awakening or was there a moment when you took the plunge?

I don't think it's ever an OMG-lightbulb moment, any more than I truly believe in a single flash moment of falling in real, true love. Real love and trust alway takes time and gradual getting-it-ness.

In your TED talk, you describe how the act of asking creates a moment of connection from one human to another which, in turn, means that people want to support you. That makes sense when you can connect face-to-face with someone, but how do create that sense of connection with a massive crowd? How do you extend it across time and space?

I've done it with blogging and Twitter. It's about taking the time and consideration to actually talk to people one-on-one, bit by bit. Contrary to conventional wisdom, I actually read the comments.

And I talk, argue, and hang out with the people of the Internet instead of just stating my case, shouting into my megaphone, and scampering off the way a lot of other marketers (or musicians) do. It's a lifestyle choice; it means actually sharing my social and real self with the online crowd, but that comes really naturally to me. I love it. It's like constantly being in a bar full of crazy people, and that sort of thing really turns me on. It also opens me up to a lot of negativity and noise and psychic violence, and that's just part of the deal. You have to absorb it all, or it doesn't work.

The transition from "make people pay" to "let them pay" indicates a profound shift in the economic relationship between producer and consumer. Does this only work for music and software? Or do you think we could run the world on a gift economy?

I'm not that crazy. I think, in essence, once you aren't dealing person-to-person, you're going to have to start using symbols. And eight billion people all magically trusting each other doesn't sound very realistic, does it? But, within communities, and between businesses and audiences and artists – absolutely. I think the more important, immediate shift in thinking is about how we can support and talk to each other without the middlemen we've all just taken for granted for years.

That's where the asking, giving, and receiving without awkwardness and fear could really change things, right now, because so much of it is just uncomfortableness; so many artists just won't ask. And so many people have such a hard time talking about money – and understanding that art is a concrete thing that costs money to make. But it must be made, by someone, somewhere, or we'll have no art.

You release your work under a Creative Commons license, which encourages sharing and remixing. We’ve done the same with our software. (Loomio is under AGPL.) What impact has this had on your work? Has it lead to any really great remixes or new collaborations?

It hasn't much, but I'm not an electronic artist. My songs don't beg for remixes. They kind of yell at them to leave the room … There's only so much you can "do" with an off-tempo solo piano/ukulele and voice track, which is the sort of thing I've done lately – and I've yet to upload much stuff in its component parts. That being said: I give a lot of my music to smaller art-makers, film people, etc. for free, because I'd always rather things be free than locked down. Functioning with that attitude always leads to something. It's just not always direct. Some of the artists I know and have become friends with follow a thread you can trace seven steps back to one fan tweeting another fan of some free content. It's all impossibly, beautifully networked together. 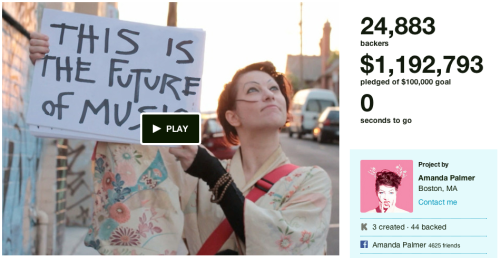 In 2012, you ran an incredibly successful crowdfunding campaign, which allowed you to release and tour a new album without the support of a record label, but also opened you up to intense scrutiny from all corners of the web. On balance, was the experience more liberating or demoralizing? Is crowdfunding the democratic leveller we all want it to be, or a just a hyperactive new strain of capitalism?

Liberating, always. There's no other way to function.

You can't go out and share your life, work, and soul, trying to figure shit out as you go along in a giant, slapdash-organized, drunken love parade with all your friends and not expect the inevitable backlash. But I stand solidly by the things I've done, I have no regrets. I mean, I'm a human being. On the days when I log onto Twitter and see "AMANDA PALMER IS A SUPERFICIAL FUCKING FRAUD WITH NO BACKBONE. FUCK HER AND HER BULLSHIT TED TALK" … yes, I feel a bit demoralized. But there's usually enough understanding from the rest of the gallery to make up for it, and I follow the light.

It still baffles me that people see crowdfunding as "begging" and musicians asking for subscription help as "scrounging." It's like, what's the difference between giving money directly to the artist and buying a piece of plastic at Best Buy? Wouldn't you rather deal directly with the artist, so they see the money? It's amazing how many intelligent people can't connect those dots.

Finally, what are you working on now, and how can we help?

Aw, thanks. I'm cranking away at this book, which is tentatively titled The Art of Asking, and it's exploring all these above topics and way more. It's funny. It started out being a book just about street performing and crowdfunding, and it's wound up being much more personal … about my friendships, my marriage, and all sorts of other things that perfectly explain the headspace you have to get yourself into if you're going to see the cyclical nature of things and release yourself into being a good asker and a good receiver, or a good giver. It's been a crazy, personal journey for me, as well. I never stop learning; everybody and everything always teaches me.

One thing I've learned for sure, even though it's something I've been told all my life by my mentors: All beings seek liberation. Even if they don't know it, they do. They're like sunflowers aching to the sky. When you start looking at the street and the marketplace and all human beings that way, everything starts to make more sense.

Loomio is currently practicing the 'art of asking' with this ambitious crowdfunding campaign, to develop software that makes it easy for anyone anywhere to participate in decisions that affect them. Find out more at https://love.loomio.org.

Richard D. Bartlett is one of the co-founders of Loomio, an Occupy-inspired app for consensus decision-making built by a team of open-source developers and activists in New Zealand. Loomio

Richard D. Bartlett is one of the co-founders of Loomio, an Occupy-inspired app for consensus decision-making built by a team of open-source developers and activists in New Zealand. Loomio is funded by a sharing economy model, and is currently crowdfunding to make the tool accessible everywhere!