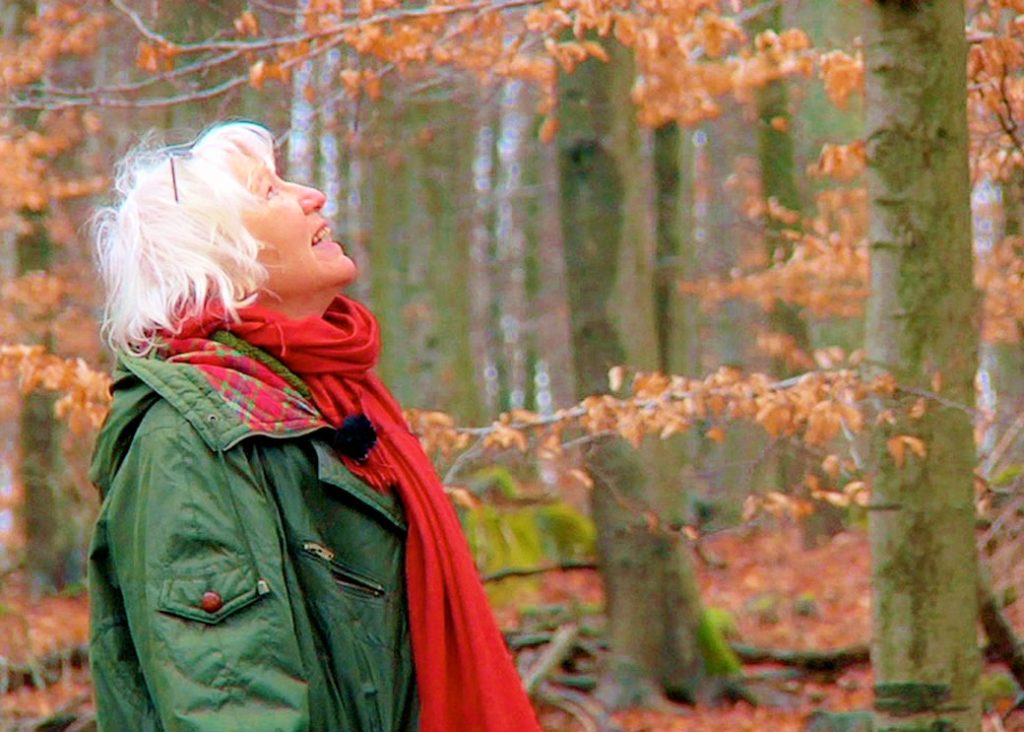 When I first saw HeideMarie Schwermer's film, Living Without Money, I was impressed not only by her courageousness of living her beliefs, but her ability to overcome the fear of living without money in old age.

Heidemarie Schwermer was born in 1942 and worked as a teacher for almost 20 years in Germany before she became a psychotherapist. She had two children and three grandchildren. In 1994, she founded Gibb & Nimm, Germany’s first exchange circle. Two years later she gave away all of her belongings, including her home, to see if she could live without using money in protest of an unjust economic system. Slowly, she has managed to step out of the dominant economic structure and find a new way of life, free of worries and possessions. Her goal is to inspire a more just and equal society.

Her first book, "The Star Money Experiment,"  was translated into many languages and awarded the Tiziano Terzani Peace Prize in 2008. In 2010, a documentary film about her life was released.

Mira: What was your life like before you gave up money?

Heidemarie: I lived normally as a psychotherapist with my own practice, but always with thoughts of how to help more in the world.

Mira: What was the turning point in your life?

Heidemarie: I was upset at how money was destroying the Earth and creating injustice. One day someone spoke in the radio about a village in Canada where the only factory went bust and all the people were without jobs and money. The people said, "We are all capable. We can get together and help each other." They decided to change their doings with each other without using money. This idea seemed to me so excellent that I began to create something like this in Dortmund, where I lived to this time. It was one of the first barter groups in Germany.

Heidemarie: In Dortmund there were many very poor people living in the street without habitations and money. A barter group could help them, I thought, because every person is capable to do something for others. And for the poor people it really could be a great help to have a new strategy. I began to live complete without money two years after the foundation of Gib & Nimm (Give and Take), is how I called the new group.

Mira: How does it relate to your political or spiritual beliefs?

Heidemarie: I thought that money was something that came between the people and a doing without it could change a lot. A world without money is my ideal.

Mira:How has your daily life changed for the better/worse?

Heidemarie: In the beginning I had to learn a lot, for example to  be patient, because now I didn't go into a shop to buy the things I needed, but I waited until they came to me. It was a very spiritual thing. All I needed came to me, even if I didn't say something. I lived in the houses of people who went in holidays, I looked after their cats and dogs and I worked with the barter group when I had given up all my own things.

Mira: What are your biggest challenges and joys of life without money?

Heidemarie: The surprises and adventures! There are so many things which come to me because only because I wish for them, so I always have the idea that my life is heaven.

Mira: Do you worry about not having health care or your choice of healthy food
or possibly living without a roof over your head (i.e. fear of mortality)? If not, why not?

Heidemarie: My life changed a bit after 11 years. When I came into the retirement age I took the money which came from the state, which I gave away to poor people. I also had many offers for housesitting so I had many homes and my health is better now. I have so much more than I did before and faith that what I need will come to me when I need it. I work a lot with my fears and living without money is good practice for letting go.

Mira: Is it socially alienating to be poor or do you find you have more connections now?

Heidemarie: I now have a big social network in Germany and even in Europe. There are so many people who understand what I am doing and they invite me to exchange ideas with them.

Mira: Do you have any stories of how your chosen path has impacted other people?

Heidemarie: There are a lot of people who take something of my life, for example a filmmaker who accompanied me for two years, she lives now without her own habitation and is very happy with living in houses where she looks after cats and plants for her friends.

Mira: Do you think it's realistic that other people try to live without money? How do you recommend they try to integrate some of this into their lives?

Heidemarie: For me it is not important that some people live exact like me. I am thinking in a whole world without money, because for me the behavior behind the dealing with money has to do with power, with greed and other bad things. I am thinking in a world where every person has enough to eat, because in studies they say that there is enough for all the 7 billion inhabitants of the world. There must not be hunger and poorness.

Mira: What would a community or a world without money look like to you? What's your vision for transformative change?

Heidemarie: We could have a complete different world, if more and more people are thinking in a different way: for example that everyone has a special place, a right to live in dignity, to do things which they really like! I live this wonderful life without competition and envy, because I know that all I need comes to me, not more, because this would be a ballast. I live a simple life in joy, and this could be for everyone!

Watch Heidemarie at Tedx below or check out her film, Living Without Money.