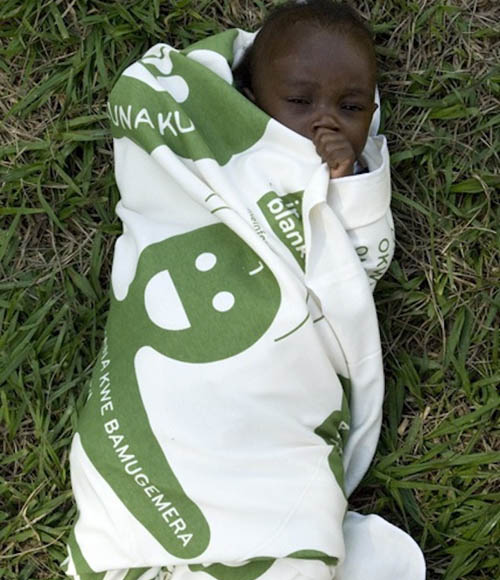 As new parents know all too well, babies don’t come with an instruction manual. For many American parents, this unfortunate fact means sleepless nights, the occasional panicked call to the pediatrician, and the appearance of shows such as NBC’s Up All Night. In many nations across the world, however, it means something far more serious – high infant mortality rates. In Uganda, for example, the infant mortality rate (or number of babies per 1,000 who die before their first birthday) is 62.47. For comparison, it’s 6.06 in the United States and 2.78 in Japan. This difference is due, in large part, to lack of access to reliable healthcare in countries such as Uganda, but lack of accurate information about newborn health is also a serious contributing factor. 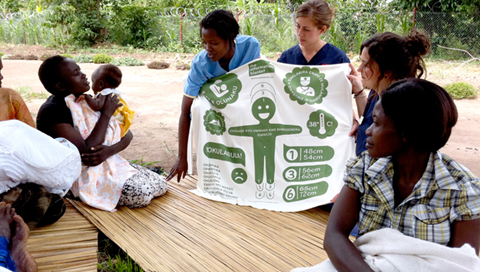 Ugandan mothers talk about the Information Blanket with the staff of Shanti Uganda. Photo credit: Neil Powell. Used with permission.

When I was presented with these staggering numbers in the PSFK and Unicef Future of Health report last year, I had to take action. And, so, the Information Blanket was born. The Information Blanket is an approach to reducing infant mortality that’s one part information, one part design, and one part sharing. Besides providing warmth for a newborn in need, each blanket is printed with vital information about newborn health – from feeding and immunization schedules to a growth chart and signs of serious illness. This information is conveyed both through words and through simple images. Ultimately, we believe accurate, culturally sensitive infant health information delivered in a memorable, easily accessible way can empower mothers and initiate behavioral change. The Information Blanket is built on a one-for-one system, much like TOMS. For each blanket sold here, one will be donated to a new or expectant mother in Uganda. Customers can also choose to donate a blanket without purchasing one themselves. This business model works because people in the United States – among other places – are willing to donate some of their resources to share information (and a warm blanket) with a woman halfway around the world.

In May, armed with this idea and several hundred blankets, I traveled to Uganda to debut the blanket with my NGO partner, Shanti Uganda, a birthing center outside of Kampala that provides pre- and post-natal care for local women. But, as much time and research as I had put into the project, I was in no way prepared for what I would see upon arriving in Uganda. Upon landing, I was struck by the greenery, bountiful trees, and thick sweetness of the air. But as soon as I entered Kampala itself, everything changed. Life there can only be described as chaotic; the air is filled with pollution and the noise is inescapable. As I drove through the city, en route to my hotel, I saw groups of men standing about, as if they were waiting for something that would never come. A sense of hopelessness surrounded them. It was haunting. 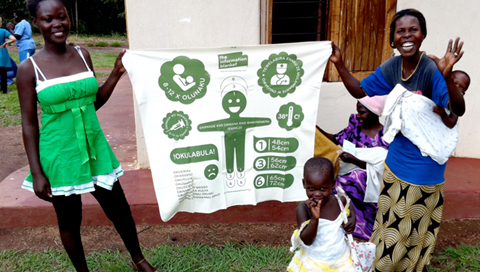 This sense of hopelessness was replaced by an even stronger sense of unluckiness when I visited the hospitals and birthing centers around Kampala. I met woman after woman who loved her baby but couldn’t afford the basic tools for a clean birth, and didn’t have access to the knowledge necessary to properly care for an infant. These babies begin their lives at a disadvantage, having been born into a state of extreme need.

I returned from Uganda with a renewed sense of dedication to this project and am now working on it full time. So far, it’s been an amazing success. Since May, we’ve donated more than 600 blankets to moms in Uganda. In the coming months, we’re hoping to introduce the blanket to other countries with high infant mortality rates, including Afghanistan, where the infant mortality rate is 149.2. This goal is becoming more and more attainable thanks to a growing number of people who are sitting up, taking notice, and buying a blanket for a woman in need.

As a designer and executive creative director, Neil has extensive experience on brands such as The Coca-Cola Company, BMW North America, Jim Beam Brands, Time Magazine, Kellogg’s and Nikon to

As a designer and executive creative director, Neil has extensive experience on brands such as The Coca-Cola Company, BMW North America, Jim Beam Brands, Time Magazine, Kellogg’s and Nikon to name a few. In response to PSFK’s The Future of Health” report, Powell created the Information Blanket, traveling to Uganda to launch the blanket with his NGO partner, Shanti Uganda, a birthing center two hours north of Kampala that provides pre- and post-natal care and midwife birthing to local women. In June of 2011, Neil left his post as a Partner and Executive Creative Director of Beattie McGuinness Bungay in New York to pursue the project as a full-time endeavor.