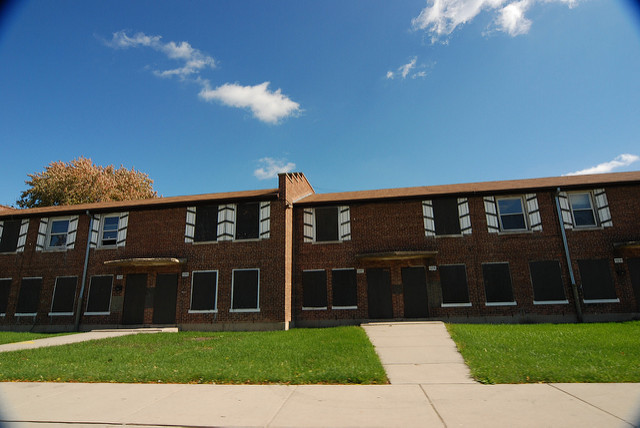 In Cook County, Illinois, one of the most populous counties in the U.S., officials are taking an innovative approach to spur job growth and promote sustainable energy. Last April, they launched a program to support community shared solar power in the Chicago area and selected 15 pilot sites — public housing complexes, churches, industrial areas, and landfills, to implement community-owned solar projects.

Their goal was to establish unique models for providing clean, efficient energy to small communities. Instead of asking residents to invest in solar panels for their homes, the officials proposed that they become members of small-scale energy cooperatives. One of the sites of this pilot project is at Altgeld Gardens, a housing development on the far-south-side of Chicago located in the Riverdale neighborhood, where residents have long lobbied public officials to invest in the community with little response. If successful, the Altgeld Garden’s solar farm would prove that renewable energy can lower power bills for public housing while providing job training for residents.

Crystal Aidara runs an energy business on Chicago’s South Side, and she’s been working to launch the community solar project in Altgeld. She thinks it can be revolutionary. “We are trying to push the model across the nation,” Aidara said. Sure, she likes renewable energy projects for the environmental benefits, but she’s really interested in the potential for job training that the sector can provide. “I look at renewables differently,” she says. “Everyone wants to be a solar installer or technician but there are a lot of other positions that happen before that.”

“As a community member, we must develop these resources for our own neighborhood,” she says, adding that her company, NRG Community Development Corporation, is one of the only African-American owned energy generation companies in Illinois.

Riverdale has the highest rate of unemployment of any community in Chicago. Two reasons: pollution keeps business away and isolation makes it difficult to get to work. The area was once known as the “Toxic Doughnut,” and Altgeld Gardens was the birthplace of the environmental justice movement, born from the work of activist Hazel Johnson.

For decades, Johnson fought to bring attention to how pollution was hurting the mostly African-American residents of the housing project. She connected with a young President Barack Obama there, when he was first working as a community organizer. Johnson’s daughter, Cheryl, assumed her mother’s legacy and now runs People for Community Recovery, the organization that the elder Johnson ran for years. She has been working with Aidara to launch the community solar project.

With community solar, people can share the benefits, including a reduction in energy bills. But proponents are touting more than just the environmental and bill-saving benefits. They say community solar can provide badly needed training and jobs for depressed neighborhoods — it’s clean energy with a spoonful of urban renewal. So how exactly does a community solar program work? It’s a solar powered electricity system that provides power and financial benefits at the neighborhood level. It’s different from residential solar where a homeowner installs solar panels on a single roof.

Unlike the community power model in which a buying cooperative — an organization facilitating bulk purchases of solar panels for homeowners — the community solar model is typically comprised of small solar farms, and in the case of Cook County’s initiative, farms built on community sites. Energy researchers believe that the community solar model could soon enter the mainstream. According to a 2017 report on the growing segment of solar energy production by GTM Research, 410 megawatts of community solar sites will be installed across the U.S. this year, nearly doubling the production from last year. That’s remarkable. In 2013, there were just six megawatts installed in the U.S. and just a measly megawatt back in 2010.

It couldn’t be a better time, says Deborah Stone, Cook County’s chief sustainability officer. She believes the Altgeld Gardens project can be replicated across the Chicago Housing Authorities’ many developments. To launch the initiative, Stone says that her team pulled together all the stakeholders – the City of Chicago, the Environmental Law and Policy Center, Elevate Energy, and others – and asked what policies would Cook County need to have to make community solar work. They had some guidance from other states, but “to some extent we just had to boot strap it,” she says. The group’s research was included as language in the Future Energy Jobs Act, a massive energy bill passed by the Illinois legislature in December of last year. Cook County received a $1.2 million award from the U.S. Department of Energy’s SunShot program to develop the program.

“The first thing that we did was an inventory of community solar in this area,” Stone said. There was a rural electric co-op in Western Illinois that had one. There’s plenty of community solar in Colorado and Minnesota, but she says that wasn’t the case locally. “It didn’t take too long because we realized there was none,” she says.

In Cook County, according to Stone, a lot of people don’t have access to the benefits of residential solar. Maybe they rent or live in a condo. Maybe their roof is too flat or too shady, or they can’t afford the upfront costs. That’s why shared solar farms can really have an impact.

“We think that community solar is a great concept for bringing sustainability for everybody in the county, no matter who they are or what county they live in,” Stone says.