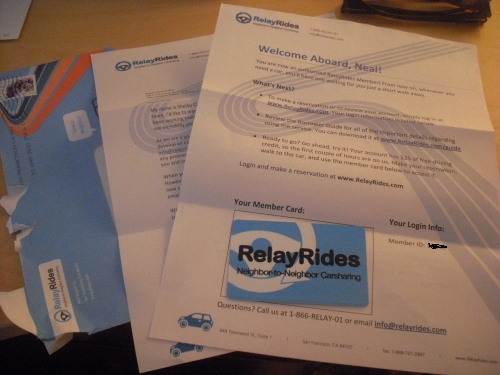 I got my membership card from RelayRides, the peer-to-peer car sharing service, just today. The signup process took about 5 minutes online. I received my membership kit a few days later. The key item in the kit is the pass card, which gives users phyical access to other members' cars. The signup was fairly painless, and through it I learned how to be a good RelayRides community member.

I'm excited about peer-to-peer car sharing not only because as a carfree person I occassionally need a car, but also because how important it could be to growing the sharing economy. My excitement is tempered, however, by the fact that there's no RelayRides cars in my Mountain View neighborhood yet. There's a bunch of cars in San Francisco, so there's a chance I could use it in place of my City Carshare membership when I'm in the city. I also checked competitor Getaround, and they have a couple cars in my 'hood. I might end up trying them first.

Not sure how my experiment with p2p car sharing is going to play out, but I'll definitely write about my first rental and beyond. Stay tuned.