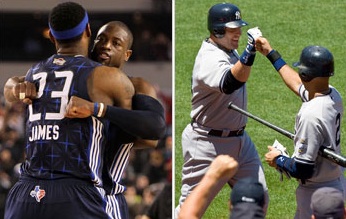 Dacher Keltner is the director of the UC Berkeley Greater Good Science Center, where I worked for three years (and a contributor to Shareable.net). Today the New York Times published a very good article based on Dacher's research into human touch.

Touch “is the first language we learn,” says Dacher, and it remains “our richest means of emotional expression” throughout our lives.

Good to know, but the article gets really interesting when it looks at how touch affects group performance.

One study by Dacher and his colleagues finds that touchy-feely basketball teams–those whose players hugged and high-fived each other all the time–were the among the best in the NBA. "The most touch-bonded teams were the Boston Celtics and the Los Angeles Lakers, currently two of the league’s top teams; at the bottom were the mediocre Sacramento Kings and Charlotte Bobcats," notes the Times.

Why? The study finds a correlation; it doesn't establish causation. But the most likely explanation is that touch helps release oxytocin, the "trust hormone," and to reduce levels of the stress hormone cortisol. The brain feels it can relax, freeing it up to focus on solving problems. "In effect, the body interprets a supportive touch as 'I’ll share the load,' says the Times. But here's the quote that really blew me away:

“We think that humans build relationships precisely for this reason, to distribute problem solving across brains,” said James A. Coan, a psychologist at the University of Virginia. “We are wired to literally share the processing load, and this is the signal we’re getting when we receive support through touch.”

I love this beautiful way of understanding touch, sharing, and teamwork.

FYI: I co-edited an anthology with Dacher called The Compassionate Instinct: The Science of Human Goodness

(published last month by WW Norton), which covers this line of research in much greater depth. Dacher will discuss some of these issues with legendary psychologist Philip Zimbardo in the upcoming seminar, "Goodness, Evil, and Everyday Heroism," on February 26th in San Francisco.