Author Q&A- How to Do Nothing: Resisting Attention Economy - Shareable
Skip to content 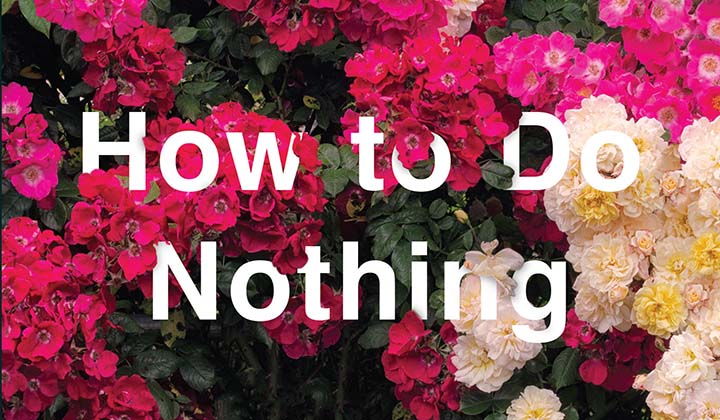 Being idle in this age of hyper-productivity can sometimes leave us feeling a sense of profound guilt. Instead of enjoying a few minutes of stillness, we feel constant pressure to do something. This never-ending pressure is what inspired artist and writer Jenny Odell to pen her first book, “How to Do Nothing: Resisting the Attention Economy.” In its pages, Odell takes apart our notions of productivity and explores how in this age of incessant doing, the simple act of doing nothing can be revolutionary.

Odell’s book is anti-capitalist and in many ways an indictment of busyness. She critically analyzes the idea of productivity that is so central to our society, and comes up with some fascinating insights. Shareable spoke with the author about productivity, capitalism and social media.

Robert Raymond: What inspired you to write this book?

Jenny Odell: The book came out of a moment that I was having in late 2016 — there was the election [of Donald Trump] and we also had the Ghost Ship fire here in Oakland. It was a moment in which I was observing that I had kind of an abusive relationship with my media consumption. It was a little bit of a crisis for me, and my reaction was to go sit in the Oakland Rose Garden and do nothing — that was the seed of it. This led me to think about the importance of public space and similar kinds of spaces for wandering and non-goal-directed activities as being something that wasn’t just a luxury but that is actually very important for reflection and processing.

Can you sketch out the thesis you explore in “How to Do Nothing”?

The book is an argument about what productivity is for. One risk of being caught up with the idea of productivity is not asking questions like, “productive of what?” and “for whom and why?” It’s bound up with this critique of ideas of progress and innovation that don’t acknowledge what is already around us and that might need to be repaired and cared for.

And it’s obviously not about actually doing nothing. It’s really more about inhabiting a mindset that is different from the one that is pushed on us all the time. We’re asked to make judgments and to produce statements, opinions and knee-jerk reactions pretty frequently. Ultimately, we’re asked to have something to show for our time. Doing nothing is my shorthand for other ways of thinking and being.

Things like listening, observing without knowing, watching and not making a judgment. For example, I talk about bird watching in the book, an activity that doesn’t produce any deliverables — there’s nothing that you can show for your time when you’ve just been sitting and observing. From a traditional view of productivity it doesn’t appear to be producing anything; it appears unproductive. But I’m making the argument in the book that bird watching, and other similar activities, really only look useless from a very narrow definition of usefulness.

Let’s explore those definitions of productivity and usefulness. You tie all of this in to our current economic system, which has been very successful in colonizing not just the outer world, but our inner worlds as well. Can you talk about the connection between capitalism and this idea of productivity?

A lot of it boils down to this idea that time is money. That’s been the case for a long time, but time has become money in a more complete way than it has been before. And also in more granular ways that are much more part of everyday life, stretching outside of what we would call work and also into the way we view ourselves.

So in a purely capitalist system anything that can’t be appropriated or sold is seen as superfluous or useless. It’s an especially ruthless framework when you apply it to how you imagine yourself and the parts of yourself that are not “valuable.” And it not only threatens these parts of ourselves, but it also threatens our environment. There are places that don’t appear productive but that are actually hugely necessary to everything else. So there are important parts of ourselves and parts of the environment that are not recognized from a purely capitalist framework.

In the book you dive deeply into the world of social media. Can you talk about this idea that you call “the attention economy” and how it relates to social media apps?

These apps are designed specifically to keep you on them as long as possible; it’s referred to as persuasive design. I fairly often have the experience of looking at something on my phone and then looking up and seeing something in physical reality in front of me that’s really surprising, that had just been there all along without me noticing it. In the book I talk about the crows that I’ve befriended on my street. A couple of times when they’ve landed near me, they’re looking at me and waiting for me to notice them when I’m looking at my phone. They’ll make this really sharp noise directed at me to get my attention.

But there are also problems around what kinds of expression and interaction apps allow — and what time frame they exist in. They don’t provide an in-person interaction, and you have to design your utterances to get attention over and above all of the other utterances that are going on. That doesn’t bode well for the formulation of your own thought and the ability to have conversations with others.

So many of our interactions are now mediated through these companies that constrict our dialogue within algorithms intentionally designed to maximize profit. It not only shapes how we communicate, but it also shapes how we experience the world. It’s like, is an experience really worth having if you can’t make an Instagram Story out of it? It has a cheapening effect on our interactions with each other and with the rest of the world.

I think cheapening is a really great way of putting it. That’s why it remains really important for me to occasionally have experiences that not only don’t post on social media, but that I don’t even tell that many people about. In the book I write about a trip where I went to go see the Mokelumne River, where we get our drinking water from. [It originates in the Sierras northeast of the Bay Area.]

There was a large portion of that trip where I didn’t have [cell] reception and I happened to go to this extremely beautiful place that is not super well known. I had this whole day where I walked around and it’s something that just lives in my mind. When you have those moments it’s really a great reminder that those things really did happen even though you didn’t share them on social media. They retain the kind of depth and interiority that they had when you had the experience.

There’s a strong sense of opposition throughout your book. Far from advocating for lethargy or for people to check out, you seem to be advocating for a certain kind of resistance. You write, “to resist in place is to make oneself into a shape that cannot so easily be appropriated by a capitalist value system.” What is the role of resistance in your thesis?

On the individual level, if you live in a culture that prizes constant, forward-moving productivity, just the act of doing nothing or refusing to be productive is an individual instance of resistance. Of course, I also talk about how not everyone can afford to do that in the same way or in some cases at all.

On the collective level, what’s necessary right now is a very nuanced and perhaps time-consuming conversation about what we need to do and how we need to do it. Those conversations are not well served by the kind of expression that commercial social media encourages. Resistance comes out of individuals allowing themselves more time to think and process and to not participate in this constant productivity. That could be helpful for the dialogues that we should be having with each other.