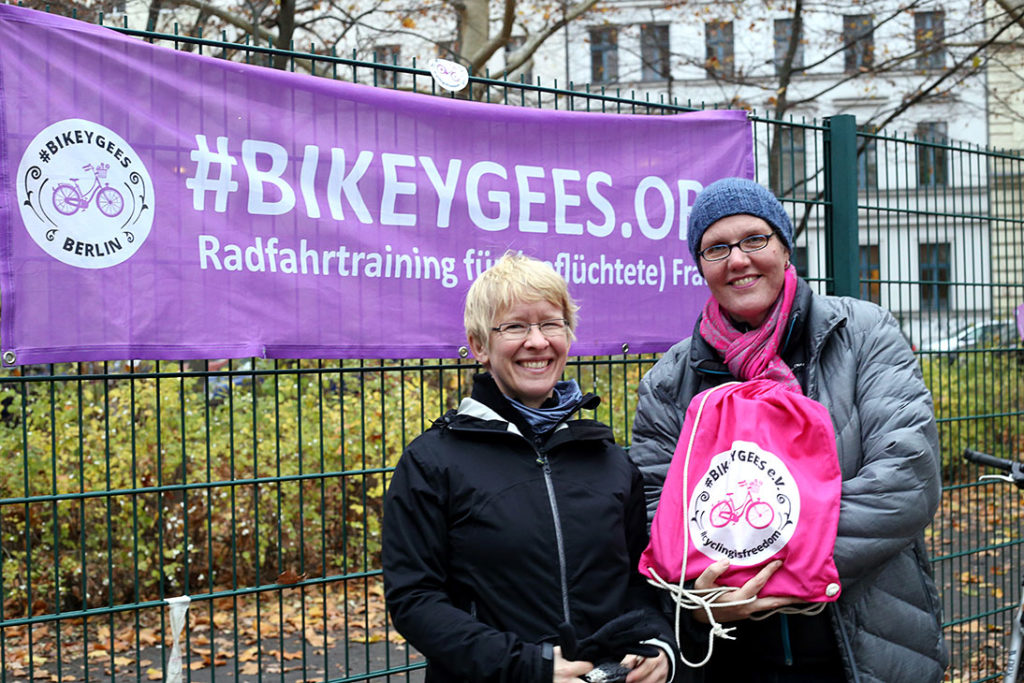 On a Sunday afternoon in the German capital city of Berlin, Alaa, a 28-year-old refugee from Iraq, joined a group of approximately 30 other female refugees from other countries to learn how to ride a bike. "This is my first time ever that I tried to ride a bicycle," Alaa says. "I never had one, not even as a child." Alaa says she heard of #BIKEYGEES, a volunteer-run collective that teaches refugees biking skills, from her friend. "I was a little bit afraid, but I liked it," she says. "I will be back."

Since it was founded in September 2015, the group has taught more than 560 women how to ride bikes. The women they teach are "mostly not used to German traffic rules," says Annette Krüger, one of the founders of the collective. "That's why we also include a little traffic test in our lessons."

Although they sometimes have male volunteers, #BIKEYGEES is mostly run by women. "Most of our pupils feel more comfortable learning with other women," Krüger says, adding that "they don't need to register in advance — just show up." Krüger says the idea for the collective came about three years ago when volunteers taught biking in a shelter for refugees. "We didn't realize then how huge the need for this is," she says. "We got asked all the time when are we coming back, so we started doing regular sessions."

When the weather is warmer, the collective draws up to 80 women. Each person is paired with one or two volunteers who help them balance on the bike and offer encouragement. Some women attempt biking on tricycles designed for adults in order to overcome their fear of biking. The number of volunteers varies each weekend. On the Sunday when I met with the group, there were 12 volunteers from a local synagogue.

Ronni Shendar, one of the volunteers from the synagogue, says she and other volunteers chose this project because it is a simple way to help people that isn't bureaucratic. "I am also a bicycle nerd, this speaks closely to me," she says. "It is a huge thing to give another woman an independence in this way, to feel that her legs can take her anywhere."

After three hours of pushing the bicycles, pedaling, and laughing together, all the women share tea and snacks and swap life stories. Although most of the women who participate in #BIKEYGEES are either granted asylum in Germany or are waiting for a decision on their asylum status, there are some who aren't refugees. Hoda Mashaly came to Germany to work as a software engineer and not as a refugee, but she also never had the opportunity to cycle before.

"As a child I lived in Saudi Arabia where women are not allowed to cycle, and later in Egypt, I was afraid of falling and didn't have anybody to teach me," Mashaly says. "I showed my father a video of me riding, and he was very happy. He is glad I am finding my way in German society," adding with a laugh that she didn't show him footage of her falling off the bike.

The #BIKEYGEES collective doesn't receive any institutional funding. Volunteers collect donations which they use to pay rent for the training ground and to buy used bikes. "Cycling is good for health and for balanced life," says Krüger, one of the volunteers. "We don't have to wait for the government. We just need to work from our hearts."