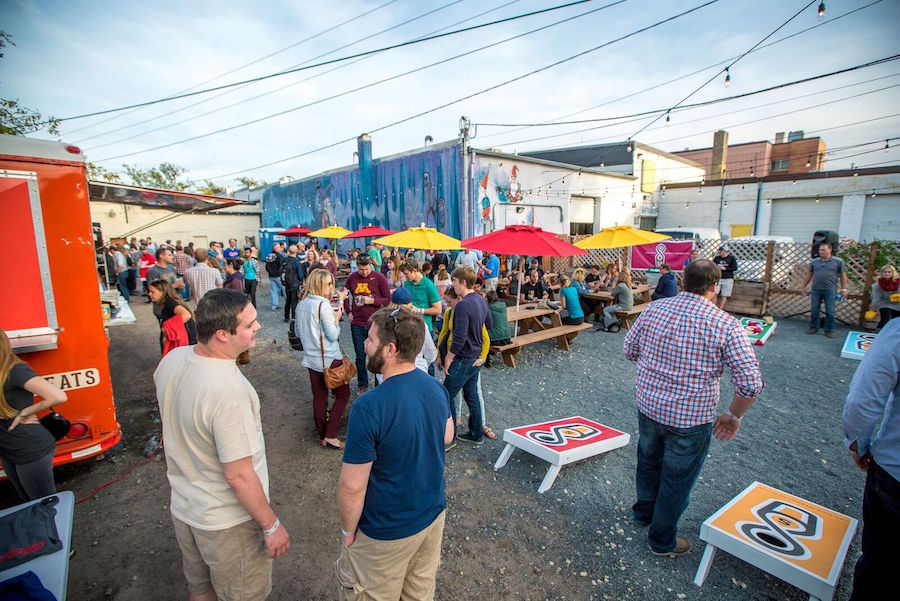 YES Magazine|February 10, 2017April 22, 2019
After years of brewing at home, Evan Sallee and his partners at Fair State Brewing, Minnesota's first consumer-owned beer cooperative, were finally ready to open a taproom in Minneapolis. They needed a spot that could accommodate brewing, with a storefront that invited people in off the street. That combination was hard to find until they looked at a space on Central Avenue in the city's Northeast neighborhood.
At first they thought it wouldn't work. The wooden floors wouldn't support heavy equipment, and the back rooms were sorely in need of repair. In their experience, problems like these were deal breakers. But here, the landlords had prioritized renting to local entrepreneurs and would pay for the necessary renovations — in part, because they wanted to drink there themselves.
"Our entire goal in creating it was to make it a central hub for community to get together," Sallee said.
The building wasn't held by absentee landlords or faraway developers, but by around 200 local people who owned the property collectively. They're part of the Northeast Investment Cooperative (NEIC), a first-of-its-kind co-op in the United States that pools members' money to invest in commercial real estate. They share profits, decision-making, and the community rewards of having, among other things, locally owned shops they want in their neighborhood.
Around the country, property values have soared with a renewed interest in urban living — a trend that’s created lucrative new markets for developers. As lease costs rise, local businesses are often shuttered and deep-rooted residents displaced. The resulting turnover has changed the character of many neighborhoods.
The friends who founded NEIC didn't want that to happen in Northeast. Though they were initially concerned about their neighborhood's vacant and underused buildings, they also knew that larger developers would follow close behind the growing residential interest in the area. If local control of property could help support independent businesses, they wondered, perhaps there was a way to own it together.
A longtime destination for working-class immigrants, Northeast is still dotted with Eastern Orthodox churches and the large husks of grain elevators that once drove the city’s industry. Many people who grew up here still live here. "There was a lot more sense of place," Recovery Bike Shop owner Seth Stattmiller said, comparing it to the neighborhood where his previous shop was located. "People are here for their lives."
In Minneapolis, like in many cities around the country, rising real estate demand meant independent stores were gradually replaced by bank branches, phone retailers, and upscale restaurants. From 2014 to 2016, commercial rent rose by 8 percent — more than four times the rate of inflation.
Nationwide, speculation-fueled rent increases are far outpacing the ability of small businesses to profit in sales from the growth, according to a report from the Institute for Local Self-Reliance (ILSR), a Minneapolis-based think tank. The result is that many businesses lose their leases to large national chains, whose brands give them leverage in rent negotiations. 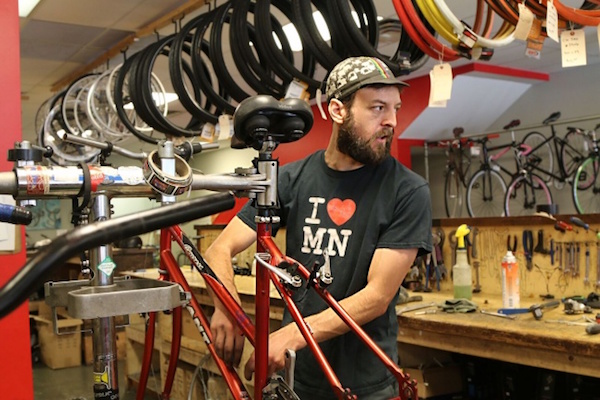 Employee Dann Zinke works on a bike at Recovery Bike Shop. The store owners bought their building on Central Avenue with NEIC’s help.
"Too often, what we are seeing is that local businesses and people are bringing neighborhoods back, and then the value that is created by them collectively is being siphoned off by a small number of investors who don’t live in the neighborhood," said Stacy Mitchell, co-director of the ILSR, pointing to the "loss of control" many Americans feel over their neighborhoods' waning affordability and increasing sense of sameness. "Owning commercial real estate is the ultimate way to guard against being at the mercy of those forces."
Before NEIC formed, the group behind it — some of whom knew each other through the local food co-op — wanted to get a foothold in the real estate market before this happened to their neighborhood. Board member Leslie Watson, one of the cooperative's architects, said they would bat ideas around when they ran into each other at neighborhood classes and meetings: What if they headed off rising costs by buying up houses together? Or maybe commercial real estate? And what if they did it as an official cooperative?
By late 2011, they settled on an investment model that didn't exist anywhere else in the country (another group had started a similar cooperative independently in Alberta, Canada). The 39 members had invested at least $1,000 each, drawing on their expertise in cooperatives, law, finance, and other disciplines to develop it. In community meetings, members got to know longtime residents who remembered the area as a once-bustling shopping corridor and newer residents who were just settling in. They showed pictures of underutilized buildings for sale and asked residents what kinds of businesses they wanted to see there. Watson remembers one member identifying Central Avenue's potential as "a beautiful smile that's just missing a few teeth." Board member Jackie Francis and her husband, Justin, invested their entire savings of $2,000 to become members after attending a community meeting.
By the end of 2011, 90 members had committed to purchasing NEIC's first buildings. Stattmiller remembers the buildings as hideous, hulking eyesores with peeling yellow paint and a single rundown bathroom in one of the basements. "They wanted to basically buy the ugliest property on Central [Avenue] and do something with it," he said. As a cooperative, they pooled $80,000 to buy two vacant buildings.
In 2014 — when NEIC had about 200 members — three businesses opened, employing 25 people between them: Recovery Bike Shop, which purchased one of the buildings with NEIC's help, and tenants Fair State Brewing and bakery Aki’s BreadHaus. The idea was that when local people make long-term, collaborative decisions about the places they live in, neighborhoods would thrive.
That NEIC was able to finance property cooperatively reflects Minnesota's deeply cooperative root system, which reaches back more than 100 years to producer-owned cooperatives that invested together in grain elevators, then used those connections to form vast sellers' cooperatives like Land O' Lakes. With more than 800, Minnesota has the largest number of co-ops in the country, a list that includes Fortune 500 companies.
This gives Minnesota a relaxed regulatory environment for co-ops. While securities laws designed to protect small investors directly limit the amount of money that can be invested in businesses, Minnesota exempts investments in co-ops — which allowed NEIC to raise needed capital from members who contributed more than $1,000. Only about half the states allow this exemption, and most cap the amount that can be invested.
While NEIC has received a groundswell of interest in the model it pioneered — board members say they've had inquiries from about 70 groups around the country — adapting it elsewhere requires hacking the model to fit local needs.

YES! Infographic
David Glick is on the steering committee of the NYC Real Estate Investment Cooperative (NYC REIC), a group that originated in Brooklyn with more than 400 members, inspired by the NEIC. "People had been talking about the need for something like this, but we didn’t really have a name for it," he said.
People in Glick's network started passing around a YES! article about what NEIC accomplished, and a Facebook group discussion led to an initial meeting that drew 350 people. As the New York group began navigating what that model would look like in a place with a vastly different legal and real estate landscape, they sent one member to Minneapolis to learn about NEIC’s model. From there, they had to improvise.
Working with a much larger population in an area where property purchases could run well into the millions, they began crafting bylaws that differed from NEIC's. Whereas Northeast Minneapolis was working in an area on the cusp of gentrifying, in Brooklyn displacement had long been full-throttle, what Glick calls "extractive development on steroids."
To attract a broader, more diverse membership, NYC REIC set membership dues at just $10 — within easy reach for most residents. The bylaws, which are currently being written, aim for full democratic involvement: Members will vote not only on board members, as at NEIC, but also on investment decisions. Glick says the group anticipates this being a much longer process in New York, where it has had to navigate different restrictions on finance and a membership that didn’t already know each other the way Northeast neighbors did.
Diversity and representation are also among the challenges NEIC has identified. $1,000 is a high bar to entry for many in the neighborhood, and board members say they discuss it frequently. If their membership is not as diverse as the neighborhood, they wonder, what does that mean for a group whose goal is local decision-making?
This is especially critical for a neighborhood on the rise, as Northeast is. Only one building is cooperatively owned, and the greater the interest in the area, the more appealing it becomes for traditional developers.
"We want to enhance what’s already here, not push people out," board member Colleen O’Connor said about the prospect that giving the neighborhood an economic boost could also propel gentrification.
To Minneapolis city council member Kevin Reich, the idea has been a "game-changer" — even in co-op-rich Minneapolis — that's influenced the city’s support of cooperatives. The city had already earmarked funds for financing cooperatives, but "to have a cooperative that can actually support other cooperatives businesses was intriguing to us," Reich said.
Reich, who has lived in Northeast since adolescence and helped launch the food co-op, said that this new energy influenced the city to this year launch a program that will fund the recruitment and training of new co-ops. Now in its first phase — educating new entrepreneurs about the possibilities of becoming co-ops — the city plans to start its first co-op training cohort next year.
"Once you get into the nitty-gritty of a free market system, if you don’t own it you don’t have a say," Reich said. "You have to be the investor who says, we value that."
So far, the community bottom line has been the biggest payoff for NEIC investors. In 2015, the co-op paid its first returns of a just over 4 percent capital credit allocation on basic $1,000 investments and less on larger shares. That such dividends are modest and not guaranteed shows that investors’ real interest is in the long-term life of the neighborhood.
This fall, NEIC plans to invest in a second property two miles away — a former heating and air conditioning shop whose stone facade is just as dated as that of the last buildings. They’re already fielding calls from prospective tenants.
Story by Christa Hillstrom.
Header photo: Fair State's annual Co-Optoberfest brings Northeast Minneapolis together through beer, brats, and Bavarian-style merriment every fall, by Davin Haukebo-Bol.