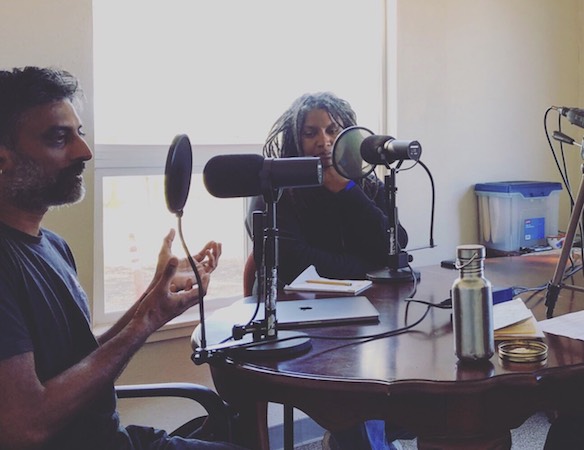 Lying a few miles south of Marin County and just across the bay from San Francisco, the city of Richmond, California, is situated within two of the wealthiest regions of the United States. Richmond, however, does not share in this wealth. Its downtown has been largely abandoned and its northern periphery is on the front lines of the Chevron Richmond Refinery, processing over 240,000 barrels of crude oil every single day and creating a toxic environment to those living in the surrounding vicinity. It's an example of what we know as a "sacrifice zone" — a community that has been largely incapacitated by environmental damage and economic neglect.

But in the shadow of the looming refinery, and within the spaces between boarded up storefronts and abandoned lots, something is stirring in Richmond. Residents, organizers, and activists have come together to create an incubation hub for community revitalization and resilience. They call themselves Cooperation Richmond, and their aim is to empower the marginalized and exploited residents of this city to build community-controlled wealth and wellbeing.

Founded in October of 2017, Cooperation Richmond is plugged into a broader national movement that includes similar initiatives like Cooperation Jackson in Mississippi. These initiatives have largely been inspired by the Mondragon cooperatives, a highly integrated network of cooperatives that form a self-supporting ecosystem in the Basque region of northern Spain. Like these other initiatives, Cooperation Richmond's mission is to build a cooperative economy that puts people and planet before profit. It does this through providing education, coaching, and both credit and capital development to cooperative businesses in Richmond.

Robert Raymond spoke with Doria Robinson and Gopal Dayaneni of Cooperation Richmond about their work and the importance of the growing cooperative movement in Richmond and beyond.

Gopal Dayaneni: Cooperation Richmond is a really good example of what we call trans-local organizing — autonomist, place-based organizing with a unifying vision, shared strategies, and common frames. We are connected with many other organizations who are doing or supporting cooperative development and who are all connected by a common vision. It's a movement that is trying to build meaningful infrastructure for economic democracy in order to build a new kind of political power. We want to actually transform the very nature of the economy and of governance in our communities — that's what we're engaged in.

And so Cooperation Richmond is an organization that we have developed for the purpose of supporting worker-owned and community-owned cooperatives in Richmond, California, which is one of the poorest parts of the Bay Area — a majority people of color community. We provide coaching, connections, and capital. We're focused on folks who are most excluded from the dominant economy, folks who we think should be the foundation of building the next economy.

Doria Robinson: The idea behind Cooperation Richmond is that we're taking somebody from a place where they're just getting started, somebody at the point where they really want to make an impact, and they want to take charge of their lives, but need some help making it happen. Maybe they have an idea for a business, but they don't have much more than that idea. We've structured Cooperation Richmond to basically take it from there, to help them take it to the next stage.

You launched Cooperation Richmond less than a year ago, but you’ve already played an important role in fostering cooperative workplaces and community engagement in Richmond. Can you tell us about your first initiative?

Doria Robinson: Our pilot project was Rich City Rides, a bike and skate shop. It’s a really powerful story. It's a small bike and skateboard shop in Richmond, a place that had no real bike shop. Before Rich City Rides, if you wanted to do any repairs to your bike, you had to go to Walmart or Target, which are not exactly bike repair places. That was it.

You know oftentimes bikes are associated with gentrification, or kind of an elitist kind of thing you do on the weekends. In Richmond, it’s really different. People can't afford cars. Not a lot of people in low income communities have cars, or if they do, their car is constantly breaking down. So they'll default to riding a bike just to get to work or just to get to the store, just to go get around. So people actually really needed to have a good place to be able to fix their bike. And so people mostly just threw out their bike if they got a flat — they would literally throw their bike out. It was painful to see. Or it would just sit in the garage once it had something wrong with it, and that was it. There was no access to any kind of bike tools or anything like that — people literally had no way to fix their bikes.

So three young men started to run a loosely associated collective bike shop out of different spaces that they could find. They worked out of a storage space for a while, they had a kind of pop-up bike shop going on for a while. They were finally able to get into a retail space across from the Richmond BART station, a space on the main street that had been boarded up for years. Rich City Rides was the first place that really started to revitalize the main street. I think it was one of the only places that's locally owned on that block as well. But they were really running a pretty substantial business at that point with very little resources, and they needed capital. They also needed a facelift — the shop looked like somebody's garage.

So we took them on and worked with them to create an action plan to strengthen the business. We got them their first loan and helped them incorporate as a California Cooperative. So now Rich City Rides is leading the effort to completely transform and revitalize the downtown, to create this opportunity for people to have healthy transportation; healthy in terms of environment and in terms of your own body. So yeah, it's kind of an honor to just see them carry this vision forward.

And why is the cooperatives structure important? What role do they play in the broader mission of creating the next economy?

Gopal Dayaneni: Well there's a few different pieces of that. So the first is that bosses just suck. You don't need them. All wealth is generated through the work of the living world. Making money off the movement of money is just extraction of wealth from other people. So the idea of all of us being able to voluntarily co-participate and control our own labor to meet our needs — and the needs of our communities — is very important.

It's also important to share that wealth. Creating commons of wealth and commons of resources is a necessary element of the transition that we need to be in. The dominant economy extracts wealth from the living world, and it begins with extracting wealth from our own work. And so in order to both confront that, but also to build a new kind of muscle memory, a knowledge of how to be in the world, to actually practice self-government on a daily basis, we need institutions and infrastructure that can do that.

The second part of it is really that cooperatives allow us to do things that the extractive economy won't do. For example, we would never exclude folks because they were formerly incarcerated — because we don't believe humans belong in cages. We would never exclude folks based on their their status as documented or undocumented because we recognize the border as an enclosure enforced through violence that fragments ecosystems and communities. So we are able through cooperation to actually live our values in a way that is foreclosed upon in the dominant economy, and particularly for those who are most excluded by the dominant economy.

Doria Robinson: I think that there's some really vital things that being in a worker owned cooperative can provide. Democratization of the workplace is something that can't be underestimated. In a worker cooperative, that's really run through democracy, folks are voting through each owner having a say in the day to day decisions as well as the trajectory of the enterprise. That's a really big deal, especially in communities like Richmond where power has really been taken out of the hands of the people. This transition of decision-making and profit-making back to the people — the transition of accountability and responsibility — is truly transformative.

If you take somebody who has never been in a place where what they do actually matters, where their whole livelihood actually depends on them completely showing up and making decisions — that's transformative. And then once you start to get a taste of that it spreads and you don't want to stop. As soon as people really get a taste of being in a position to make decisions that impact themselves and their community, it begins to extend out to other things. It doesn't just stay within the realm of the workplace. You begin to realize that, for example, the city government impacts you. Or that decisions made around the streets impact you. You start to realize that you actually do have a voice in shaping the things that impact you, and that you can stand up and advocate for things. I think that is one of the most powerful and important reasons why we chose to focus on cooperatives. We want to thoroughly empower people in every place and in every way.

Gopal Dayaneni: Like I said earlier, Cooperation Richmond is part of a larger "just transition" vision and process taking place in Richmond but also in lots of other places in the United States and around the world. The idea is that for there to be meaningful political democracy, there has to be economic democracy. So the idea is not only about creating sustainable livelihoods in the workplace but also being able to reimagine the very nature of the work that we do and how we do it. So we could support worker-owned cooperatives that just do absolutely anything, or we could prioritize those that have ecological and social value. We do the latter. So Rich City Rides, for example, is not just a bike shop, it's not just a bike shop run by folks who are normally excluded from the economy — you know, young men of color from Richmond — but it's also an organized bike shop that supports community bike rides, transit justice, and bike safety. It's really committed to a larger vision of reimagining our relationship to place, to home, and to the economy itself.