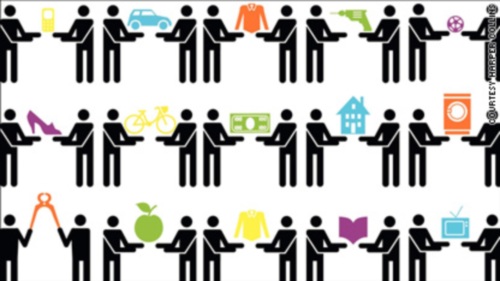 In a world where everyone shares, traditional retailers will wither and die, right?

That’s a common assumption of people new to collaborative consumption. Everybody gets that sharing reduces demand. It’s even been backed up by research. In the most definitive car sharing research yet, UC Berkeley professors found that one shared car replaces 9-13 owned cars.

If retailers do nothing, the odds are that they will wither. However, retailers are experimenting like crazy in the face of rapidly shifting citizen behavior, new technology, and declining sales. Use of daily deal sites, popup shops, facial scanning, online and mobile media, mass customization, and even dressing rooms that drop from the ceiling suggest they’ve entered an age of desperate experimentation.

And retailers take collaborative consumption seriously too. Last year, I participated in a workshop lead by the Institute for the Future for a major hardware retailer that explored how they could leverage sharing to thrive in the future. Not long after, I presented to 30 large European retailers about the sharing trend. I believe awareness of collaborative consumption is high among major retailers even if most of the innovation is coming from startups.

Despite awareness, sharing initiatives from retailers are scarce and superficial. There’s Marks & Spencer’s “Shwopping” program where customers are encouraged to hand over a used item of clothing each time they buy a new one. Used items are then reused, resold, or recycled by charity partner Oxfam. Then there’s Patagonia’s Common Threads Initiative, which supports the repair, reuse, and recycling of their products. And also RecycleBank, a recycling rewards program that supports retailers. Adam Werbach, former president of the Sierra Club and Chairman of Saatchi & Saatchi’s sustainability practice, says that initiatives are, “mostly just scratching the surface.”

It should be no surprise that large businesses are slow to innovate and current initiatives are mostly bolt-on instead of systemic changes. Like most legacy businesses, major retailers are locked into a business model that makes it difficult to change quickly.

However, there’s a way big retailers could take collaborative consumption mainstream quickly not to mention stabilize revenues, reduce waste on an unprecedented scale, and fill a gaping hole in the sharing economy – the sharing of low cost, general merchandise. And it would leverage rather than disrupt retailers’ core business.

And note that total US retail sales were $4.7 trillion in 2011. Retail is two-thirds of GDP. Collaborative consumption is an insignificant niche in comparison. Best estimates put it at around $100 billion in US turnover annually. It will not become mainstream anytime soon without big changes.

So what can retailers do to leverage these advantages and take collaborative consumption mainstream quickly?

Here’s just one scenario. It treats the point of purchase as a gateway to a collaborative marketplace that manages a product through its lifecycle including multiple owners and users.

Imagine that when you make a purchase, your item is automatically listed in a password protected inventory that pools your purchase data from every retailer together. Each item listed in your inventory would have all the product and transaction data automatically attached to it as well as a unique identifier and a link to user forums. Imagine that you can post any item in your personal inventory to an online marketplace with one click.

In my ideal scenario, every item in my personal inventory could port to an online marketplace established by a coalition of retailers — including small, local ones — that allows me to list my items for sale, rent, or swap. This way I’d have total control over how I manage my assets. And I’d be happy to pay a small fee for each transaction for this service.

There would be many advantages for retailers:

And for citizens too:

This would be far from easy, but big retailers have everything they need to do this including motivation. And it would be well worth it for them and everybody else. A coalition of big retailers could eclipse eBay in months. Consider that Walmart alone had nearly 40 times more revenue in 2011 than eBay ($422 billion versus $11 billion).

And it would fundamentally change retailers' behavior for the better. They’d begin to prioritize the highest quality, most reliable products as these would deliver the most lifetime value through the original sale and transaction fees as the product moves between users. They’d begin demanding high quality products designed for sharing from manufacturers. And it would likely annihilate throw-away culture and boost retailers’ profits.

Like many innovations in the sharing economy, this would be yet another one where everyone wins – individuals, companies, the environment, and society. That said, I doubt big retailers would pursue this directly. Disruption would likely come from a startup or an innovative online retailer like Amazon. This would be a smart play. And while I’m not a fan of big retailers, this strategy would take collaborative consumption from the fringe to the center of the economy quickly.

How would you build on this idea? And what are the other implications of this possible future? Let’s discuss in comments.