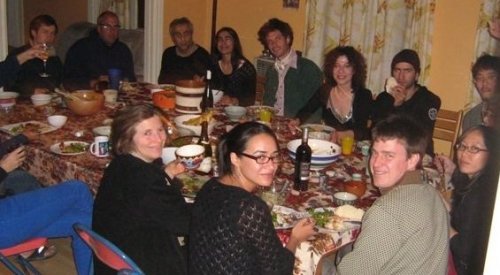 Los Angeles is known for sprawl and the attending ills of traffic, pollution, and disconnect. Our horizontal growth shows on the horizon. But there are pockets of people rethinking the way the city is structured and choosing to live in closer quarters, sometimes much closer quarters—in cohousing communities.

In cohousing, a circle of people come together in order to cultivate a commons. Many of them consist of private homes that share public spaces, resources, and responsibilities; in others, people share the same building.

The forms vary, but the number of cohousing communities is expanding rapidly. The Cohousing Association added  37 communities between 2001 and 2005, and by 2008 its roster boasted 113 across the country, from Alaska to Ohio to Texas to Oklahoma to Indiana. This year, the Cohousing Association directory lists 231 communities. But if you widen the net to include any kind of "intentional community," where people live together in search of a common vision, you’ll find 1,600 in the U.S.—all manifestations of some kind of cooperative living project.

Even in Los Angeles, notorious epitome of sprawl, cohousing communities are thriving—though in an urban setting they don’t come complete with playgrounds or rolling hills, as some do. I visited one that is a large, bustling apartment full of activists and bike-riders. The other is a house shared by a dozen twentysomethings whose lives are designed to mimic positive bits of their college and church backgrounds. 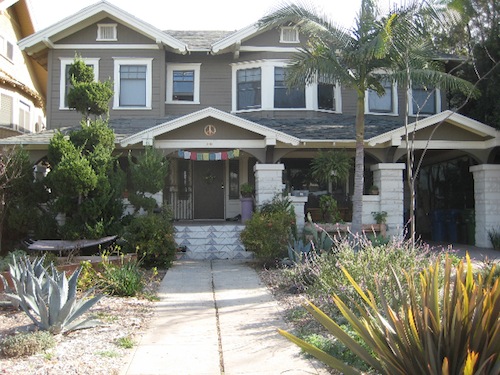 Their set-ups and specific vibes are unique, but they share many qualities too. They both have “business” meetings to organize the flow of tasks and come to consensus on changes, for example, and each has its share of clashes over hot-button issues (pets can be troublesome). Residents at both have a deep concern for the state of their city. And not surprisingly, neither living room has a TV!

But the most important thing they have in common is their social and environmental sustainability. By living densely and deliberately, cohousers use far fewer resources and generate less environmental impact while, arguably, creating a better way of life.

Over a decade ago, a group of Angelenos raised funds to purchase an apartment building in Koreatown that was being foreclosed on. Now, the nonprofit they started owns two buildings with 48 units full of renting eco-villagers, diverse in age and ethnicity.

Fourteen-year resident Joe Linton gave me a tour and described it as true to its name. It is indeed part eco and part village, a place where residents live sustainably and together, solving urban problems with decidedly low-tech solutions. They ask the question: “How do we live ecologically in the city in a human-scaled, integrated way?” 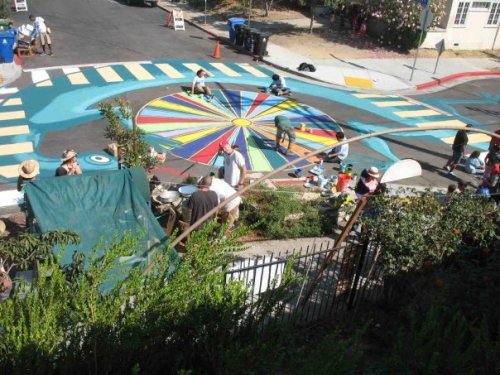 Their answers include transforming the intersection out front (pictured above) to include a mural, permeable pavement, and an extended sidewalk with plantings to encourage pedestrians to loiter and to discourage cars from speeding. They organize Sunday night potlucks and mid-week suppers, work parties, an open-mic night, laundry lines, a compost heap, and six hens.

There's also a bicycle “parking garage” (below) for the more than half who don’t own cars. There are burgeoning greywater projects—the day I visited a guy was digging trenches for his system to deliver water from his sink to the fruit trees out the window. The whole place looks like a patchwork of edible plots that would make any guerilla gardener proud. And, yes, one roof sports solar panels. 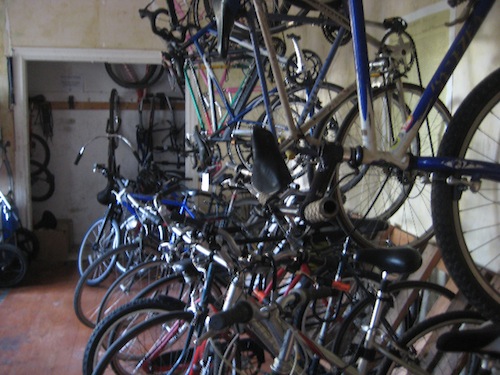 Joe described the Eco-Village as "an incubator." And no wonder: Ideas hatched so far include a food co-op and bulk bin, LA’s Bicycle Kitchen, and an organic, fair-trade coffee roasting company.

Living in community, while it may pose unique challenges, never fails to inspire. In fact, dreamed up and fleshed out projects are make the Eco-Village so charming. Like spokes of a bike wheel, everyone is contributing his or her own unique part to make the thing go.

There are also plenty of activities that spring up spontaneously. On a typical day residents may ride bikes together, take the subway to the farmers’ market, mulch, give a passerby starter plants, attend an event, or pick produce to make a salad before heading off to the potluck. 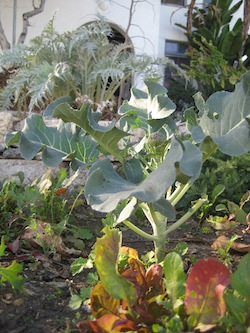 There, Joe recounts how “conversation goes from open-source mapping applications to permaculture to how we might build an outdoor oven.”

It reminded me of a college dorm in terms of aesthetic—the dimly lit hallways, community room complete with kitchen and mismatched furniture and a Nikki McClure print on the wall—and in terms of lifestyle. Joe concurs: “Maybe it's a little like a college dormitory—or maybe a small town…. people know most of their neighbors and interact with them socially.”

He describes the vibe of renters as “some hippy, some punk-DIY, some granola, some social-justice, some bike-messenger. The strongest element in the mix is urban environmental activism. There are teachers, electricians, non-profit directors, bike messengers, doctors, graduate students…all of whom are trying to make the city a little healthier, more green, more resilient.”

The Friday morning I sat talking with Johanna and Jessie in Synchronicity’s kitchen, a guy wandered in and ate some cereal, a woman did the same then made coffee, somebody made a sandwich on the griddle, a boyfriend walked the dog, someone else out back sawed a bookcase apart.

Where the Eco-Village is long-established and all about action, Synchronicity LA is a different flavor of cohousing: newer, younger and more oriented to being than doing. It feels like its residents are on a journey together that’s part sustainable, part spiritual and psychological. 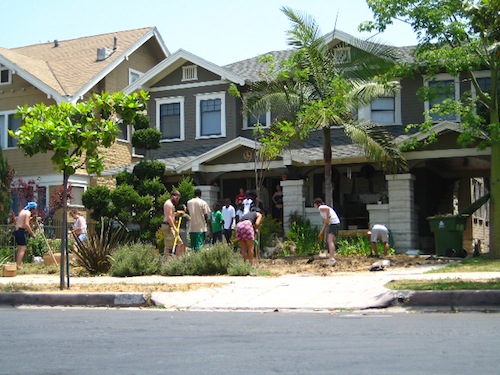 In 2008, twelve recent grads from a Christian university moved into an immense house in the West Adams District and carved out nine bedroom nooks. They were hell-bent on retaining the family feeling of their evangelical upbringings—while shedding the more restrictive aspects.

And they wanted to extend the shareable benefits of college life instead of following the same path as many of their classmates. According to Jessie, they wanted to “get away from the idea of what you do when you graduate college, settling down to have a nuclear family.”

First, they came up with a name, Synchronicity, from Carl Jung. Then they wrote a mission statement: “Generating community through hospitality, intentionality, artistic action, and a dedication to the reduction of harm.”

They eat dinner together four nights a week (to which anyone and everyone is invited), rotating shopping, cooking, and washing duties, something many American families and couples find difficult to manage. It isn’t seamless, of course, especially when it comes to what Johanna and Jessie call “food politics.” Some people were hard-core dumpster divers, others vegetarians, others hungry only for organic produce from the farmers’ market.

But they’ve made it work, and Jessie admits to eating a lot more vegetables now than she would if cooking her own menu. “It’s nice to accommodate others,” she said amiably. By eating and living communally, there is always a healthy portion of flexibility on their plates.

Aside from flexibility, the women say they have developed other skills: learning to be more outwardly than inwardly focused, being collaborative, being neighborly, and feeling like they’ve done their part to reduce harm in the world. 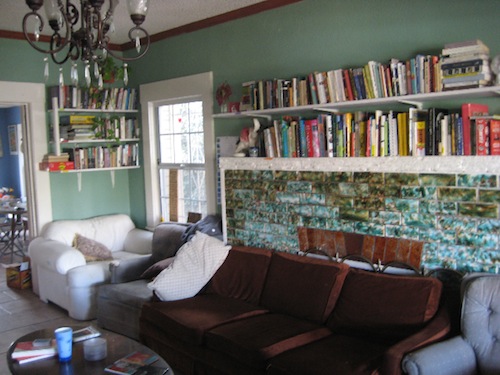 There’s a collection of secondhand furniture arranged for what I imagine as impromptu salons on the porch and in the living room. There’s art all over the walls and books adorn the mantle. They sometimes hold group sessions where they share painful stories, making meaning and offering support. They participate in creative endeavors like art and performance nights.

The atmosphere manages to be simultaneously free-spirited and industrious. They ripped out the lawn in favor of native plants and built a shared artist and music studio in the garage. And one of the founding members plans on joining the neighborhood council to get involved with local kids this year.

To pull all this off, they have to be, fittingly, "intentional." The word came up a lot. Even with buddies and people who share your bathroom, to put the effort into deliberate time together is a challenge. But one that for them is worth the effort. And also worth the lack of privacy!

While not everyone may want to sign a lease as a cohouser, the spectrum of cooperative communities is broad. Using these as inspiration, perhaps we all can bring a potluck or two to our neighborhoods and live happier ever after, together.

Danielle Davis is a writer in Los Angeles. So far she shares stories, clothes, scooter rides with her husband, and her patio with a lot of sparrows. You can find

Danielle Davis is a writer in Los Angeles. So far she shares stories, clothes, scooter rides with her husband, and her patio with a lot of sparrows. You can find her at Danielle Davis Reads and Writes (www.danielledavisreadsandwrites.com) or writing and editing Your Daily Thread (www.yourdailythread.com).