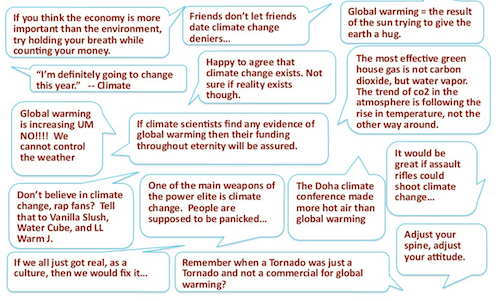 Memes are easier seen and spread than explained, but they are, essentially, elements of culture that are passed from one person to another. This, according to Joe Brewer and Lazlo Karafiath of DarwinSF’s Climate Meme Project, makes global warming a meme; but not a very good one.

Through a crowdfunded study, Brewer and Karafiath aimed to find out why the global warming meme has not activated more people, and what changes could be made for it to “infect” mainstream culture. They gathered over 5,000 global warming memes and separated them into thematic categories including harmony, survival, cooperation and elitism.

What they found is that all dimensions of the global warming meme contain elements of negativity, gloom and conflict. This, they argue, is why, unlike the Harlem Shake and grumpy cat, the meme has failed to spread. Global warming needs a more positive meme to gain mass appeal.

According to the study, we need to look outside the existing global warming meme to discover a more effective meme. The elements missing from the meme are some of the most inspiring dimensions of the human experience: love, collaboration, innovation, creativity, and, of course, sharing.

The way forward for the global warming meme, it seems, is to find a way to address global warming that inspires people. This may sound like common sense, but the study explains why and points a way forward. Here’s more detail of their findings:

Global Warming is a Virus from DarwinSF