America’s bitterly divided discourse about government and the public sector is all but absent here at the global commons conference in Hyderabad, India where criticisms of government seem driven more by an impulse to protect communities from state-corporate takings of common lands than by the urge to eliminate taxes and regulation.

The question of who can best preserve common resources — and defining what these ‘commons’ are — is a prevailing theme here, with widespread criticism heaped on governments in India and other ‘developing’ nations for prioritizing GDP and large-scale industrial growth over community-based economic survival.

Indian pastoralists and forest tribes have been summarily kicked out of new national parklands, and their traditional harvesting has become illegal, creating new pressures for tribes to enter the agrarian economy while spurring clashes with other pastoralists and farmers.

Such contested terrains and colliding interests are everywhere; how, for instance, does India supply power, technological and industrial development to its ever-rising middle-class (and even peasant communities) without radically scouring and imperiling its resources and increasing its carbon footprint?

“You have a middle class in India that’s as large as the population of the U.S. and they want electricity 24 hours a day. Gee, imagine that,” said outgoing IASC president Ruth Meinzen-Dick. 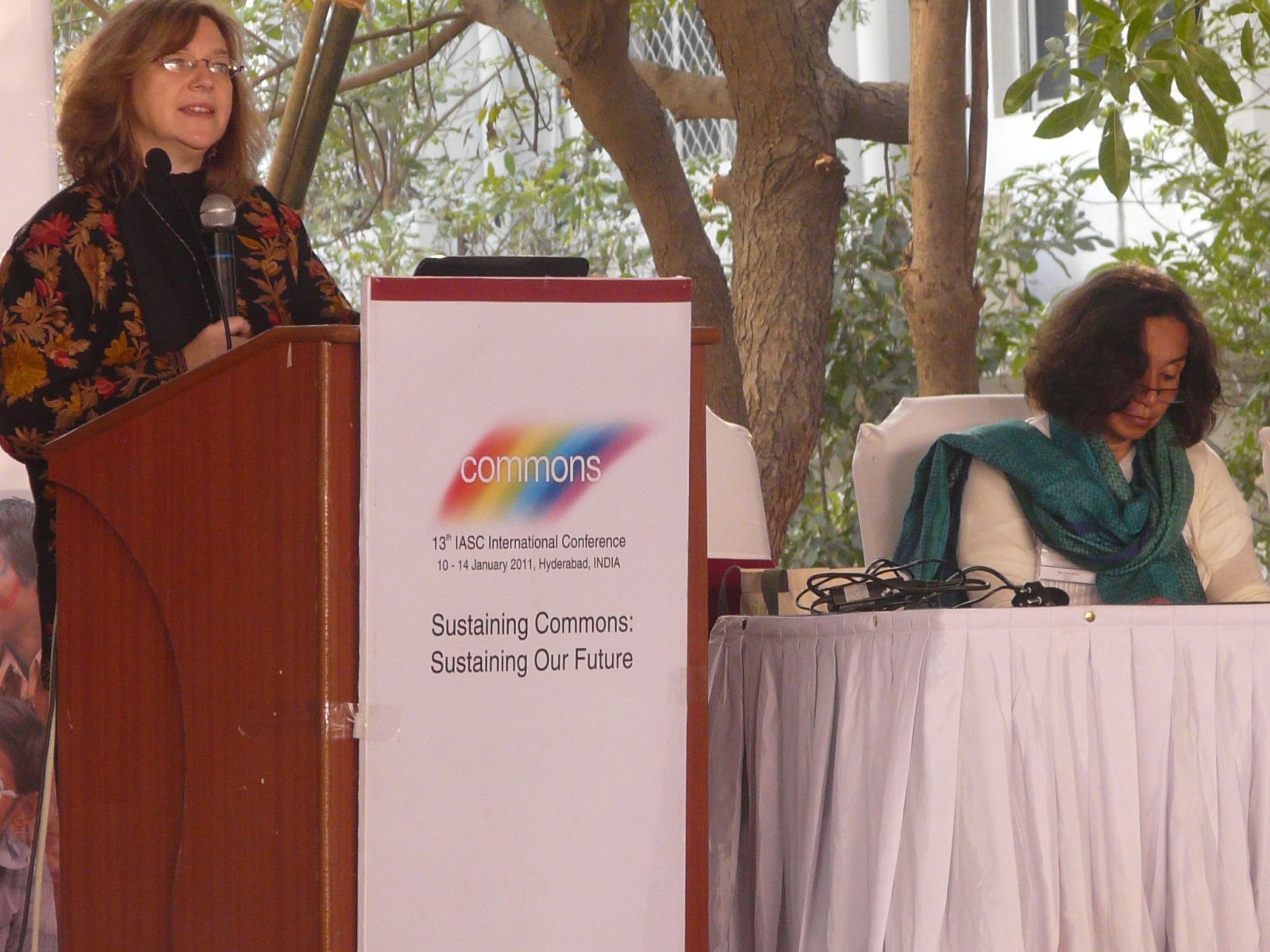 The commons concept is hard to pin down: it incorporates an intriguing (if sometimes confusing) blend of state, community, and market forces, and doesn’t eschew any of them. “There’s no one breakfast,” said Meinzen-Dick in her keynote speech, “but there are many elements of a good breakfast” for the movement to borrow from — a smorgasbord of ideas and practices that cross disciplines and ideologies.

In a speech at the IASC’s inaugural event, Nobel Prize-winning economist Elinor Ostrom critiqued the “dominant policy paradigm” of turning resources over to either government or private forces. In one study of 450 irrigation management cases, Ostrom reported, “Only 42 percent of the government irrigation systems were high-performing, even with fancy engineering.” Meanwhile, 75 percent of farmer-run irrigation projects created favorable results.

Ostrom, a key intellectual architect whose Nobel has helped elevate the commons movement profile, argues that the key is not public or private control, but community engagement, communication, trust, and sustained cooperation. “Panaceas are not to be recommended. We need to deal with complexity.”

In a flashy picturesque video following the inaugural speeches, the screen flashed these words in defining what the commons is not: “Not private. Not public. Not government. Not business. Not communist. Not yours. Not mine.” So the question becomes, whose is it? What are the commons, why are they important, how do we preserve them, and for whom?

“The question is how do you get collective action and how do you get it working with the state?” Meinzen-Dick said in an interview. It’s “not about shunting government aside. It’s not even always shunting market aside.”

Throughout the conference, I asked participants this: How can India, China, and other nations ‘develop’ U.S.-style, with ever-expanding growth and industrial production and consumption, without plunging the planet deeper into climatologic and social-economic chaos. And what role can the public sector play in preventing rather than encouraging this downward spiral?

India’s erudite and controversial Minister of Environment and Forests, Shri Jairam Ramesh, has endured “severe criticism and opposition” for blocking major hydro projects that would dam the upper Ganges River, and lamented that, in India, merely implementing the law creates big, splashy headlines and trouble. He told a rapt conference crowd, “It is time for India to accept that 9 percent economic growth has ecological consequences. There is a trade-off.”

Ramesh added, “The first thing standing in the way of implementing our laws is the development imperative.”

Yet in the same speech, Minister Ramesh cited an “army of regulators who have become part of the problem” getting in the way of sustainable, community-based development. He asked the crowd, “Do regulations require regulators?”

While Ramesh is considered somewhat of a hero for environmental and common lands protection, the minister said he also encountered “huge resistance by civil society groups” when he released a paper advocating market-based approaches to environmental management. 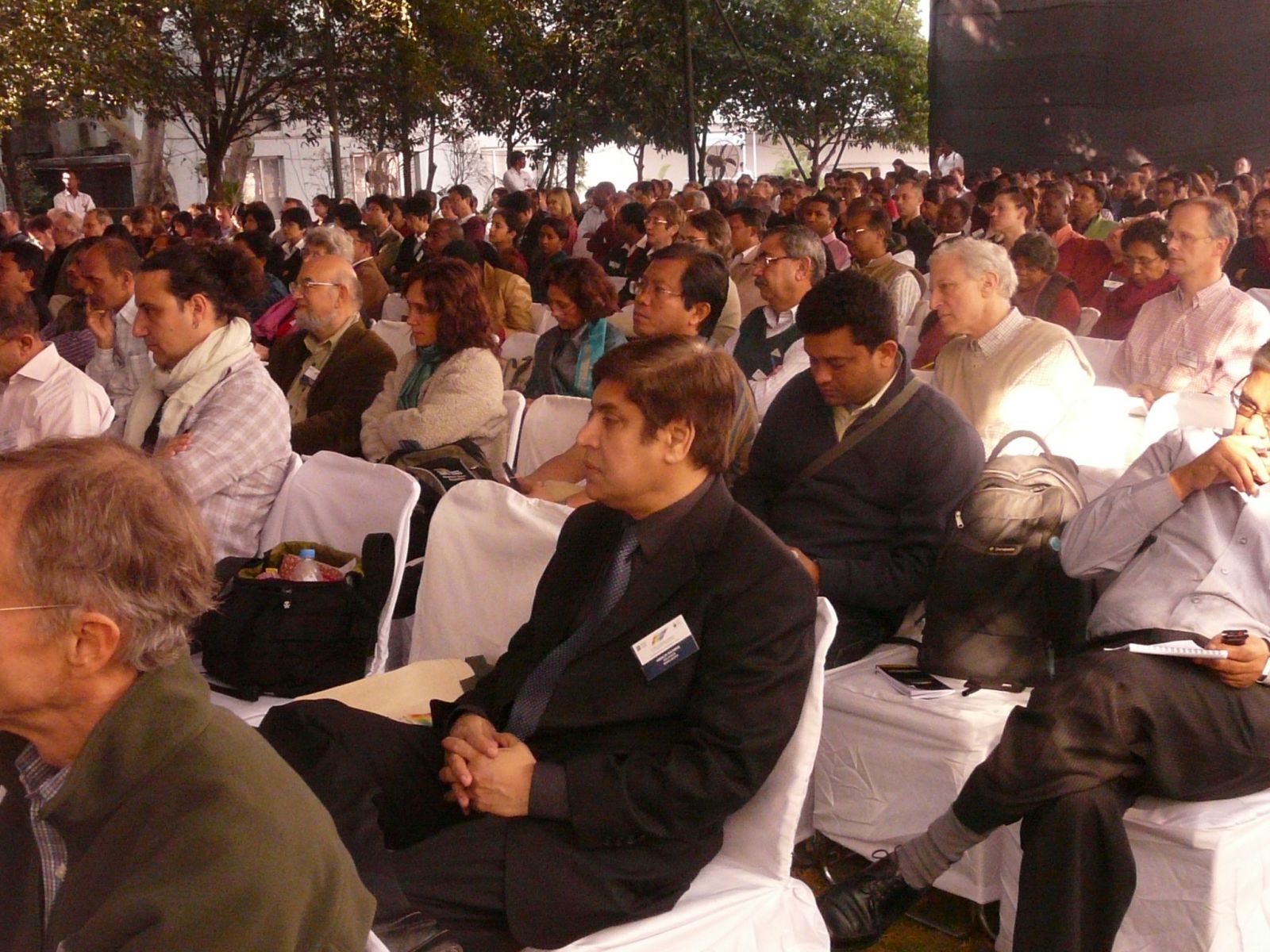 “Our laws are based on institutional monocultures,” Ramesh told the commons crowd. “We need to allow for different ways.” India is “enormously diverse” both economically and ecologically, “yet we still insist on the primacy of the state.”

In my sampling of numerous workshops and dozens of interviews, the commons conference appeared to emphasize more criticism of the public sector than the private. Several delegates I spoke with expressed frustration about this tilt. One attendee remarked, “I’m surprised we hear nothing about capitalism here, nothing about the larger underlying forces.” This sentiment was repeated several times in discussions with delegates.

“Too often we focus on getting the rules just right, but we don’t focus on the larger political environment and context,” said Ben Cousins, a land reform expert and activist in South Africa.

But the IASC conference marked significant progress on numerous fronts. With the appearance of environmental ministers from India and El Salvador, Ostrom’s Nobel Prize, and several instances of the commons movement gaining audiences with government leaders and key policymakers, it’s clear the commons movement has grown from a largely intellectual and academic station to playing a significant role influencing policy and practices on the ground.

Despite ongoing threats to common lands that are critical to both ecologies and communities, the commons movement is providing answers.

Throughout the conference there has been a strong emphasis on human-nature relationships — moving away from the idea of nature as an idyll that must be segregated from human activity. Report after report suggested at least anecdotal evidence that when communities are engaged and entrusted with lands, rather than separated from them, both the people and the land benefit.

I ask Meinzen-Dick about the dilemma of ‘developing’ economies and expanding opportunities in the context of global climate change and the need to radically reduce emissions. “We cannot become frozen by that,” she says, “then it becomes an excuse not to do anything.”

Over a late dinner of daal, chicken masala, and potato curry, a woman from the Bangalore region of India tells me about her project, run through the Catholic church and funded by India’s National Bank for Agriculture and Rural Development (whose program associates include the World Bank, OPEC, and rural agricultural credit programs), which she says is boosting incomes and opening new options for destitute peasants in 260 villages. It sounds genuinely remarkable and laudable — using a self-help model, training, and employment, the program provides small farming plots and helps people grow their own food and build income. “They are now buying televisions,” she says as a marker of progress.

On our way home from dinner, I ask a Ghanaian delegate about his country’s economy. He boasts proudly of 7 percent GDP growth, “one of the strongest in all of Africa.” I ask him which key sectors are driving the boom. Along with agriculture, he ticks off timber, mining, and an expanding oil industry as the chief engines of growth there. “Hopefully the oil is going to keep growing,” he says, though adding a moment later without much irony, “Sometimes oil can be a curse.”

(A group of us visited two area pastoral villages that are encountering land encroachment from large sugar cane plantations and power plants fueling Hyderabad’s ongoing growth. In an upcoming report, I’ll tell the tale of a fascinating and eye-opening trip to these villages, which feature the contrasts of cell phones and satellite dishes alongside chickens and oxen parading through dirt paths and pastoral villager tents made of cloth and plastic bags. The villagers are working with the Foundation for Ecological Security and other groups to find new markets for their wool and milk in order to survive.)