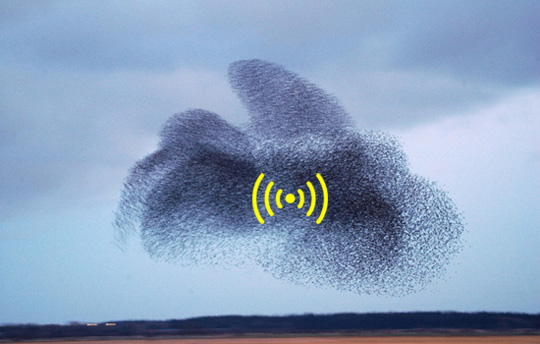 It’s a scenario straight out a sci-fi B-movie: giant self-organized robotic swarms bearing Internet access, setting up pop-up wi-fi networks during a natural disaster. Scientists at the Swiss Federal Institute of Technology have developed such a technology, using flying robots that could swarm over an area and provide Internet access to disaster response teams and citizens on the ground. The breakdown of communications infrastructure is one of primary challenges responders contend with in times of crisis, meaning that the technology could be serve as an essential lifeline. SciDev.net reports:

A fleet of vehicles would hover above a disaster zone with a module in the wing of each robot emitting a wireless signal to enable communication between rescuers. Each vehicle is made from lightweight, flexible polypropylene plastic, weighs less than half a kilogram and has a wing span of 80 centimetres. A battery-powered motor enables each vehicle to fly for up to half an hour before visiting a recharging station. The team is preparing a paper describing how it flew 10 robots — enough to establish and autonomously maintain a 1.5-kilometre communication line — to link up two rescuers on the ground.

Another potential utility for these wi-fi robot swarms is to provide decentralized Internet access in situations where a regime has shut down Internet access, as happened in Egypt. Joop DeBoer at PopUp City notes that “in conflict situations such as in Libya, the ‘allied forces’ could use a robotic swarm to empower the insurgents with the ability to communicate properly. Imagine a swarm circling above the Tahrir Square in Cairo to enable Facebook and Twitter communication as soon as Mubarak has cut off Internet.”

In a fantastic yet fascinating scenario, speculative architecture blog Pruned imagines how the concept could be deployed in other situations using a significantly lower-tech solution than robots. Pruned posits a strange future of ‘cyborg’ wi-fi-bearing birds:

…instead of hovering over disaster and conflict areas, how about urban and rural dead zones or in even more remote locales? And instead of drones and toy airplanes, you conscript pigeons, starlings and other flying weeds into a wi-fi network of cyborg fauna? …One imagines urban homesteaders converting a water tank into an aviary for their robo-starlings, next to their urban apiaries, urban chicken coops and urban farming tool shed. When they need to communicate with other urban homesteaders, either nearby or in another Detroit-like ruin pornscape, they only need to open the hatch. It’s an artisanal wi-fi for networked off-grid living.

Via PopUp City, video of the experiment: