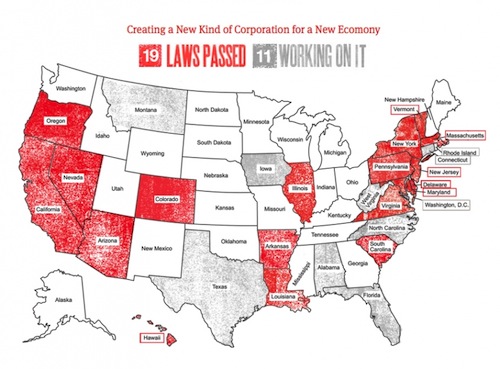 Unlike corporations whose sole purpose is to maximize shareholder value, public benefit corporations (PBCs) are for-profit corporations designed to work in a socially and environmentally responsible manner. From their creation, PBCs strive to create a positive impact on the environment and society, they take into account factors besides profit when making decisions, and they make public their social and environmental performance.

Already, 18 states plus D.C. have passed benefit corporation legislation. So what’s the big deal with Delaware? Delaware is the nation’s hotbed of corporate activity. Because the state offers favorable corporate laws and conditions, it’s home to over one million legal entities including 50% of all publicly-traded companies in the United States and 64% of the Fortune 500.

With this new legislation, corporate entities in Delaware have the freedom to focus on the triple bottom line: people, planet and profit.

“We’ve all heard about corporations wanting to ‘do well’ while also ‘doing good,’" said Governor Jack Markell in a statement. “With this new law, Delaware corporations will now have the ability to build those dual purposes into their governing documents.”

Perhaps this seismic shift will be the shift heard ‘round the world, signaling a new way of doing business.