Pulse of the City turns pedestrians’ heartbeats into music. It’s an interactive public art installation that was just installed in five locations in Boston. Amidst the chaotic rhythm of the city, it helps pedestrians playfully reconnect with the rhythm of their bodies.

When I was asked a year ago to cover the Urban Prototyping Festival, I was skeptical at first. Living in San Francisco, where the latest greatest world-saving tech gadgets come and go like Karl the Fog on an August day, I had little expectation beyond spending an entertaining afternoon among wide-eyed dreamers and their wild contraptions.

I remember my surprise when the first prototype I came across literally captured my heart. While positively wide-eyed, Pulse of the City immediately struck me as the kind of installation that could bring joy to any street corner in any city around the world, with minimal rezoning required. The crowd that was forming around me in anticipation of what musical composition my heartbeat would produce was a testament to the power of this parking meter with a heart. From my original article on the Urban Prototyping Festival:

"I don't know if it was the frenzy of 5th Street or just our natural instincts, but the first thing we were drawn to was a blinking red metal heart mounted on a sidewalk post. Before I could even read the "Pulse of the City" sign that explained how this installation would playfully empower me with self-awareness, it was already translating my heart rate into a musical composition that was being streamed on the internet for people to explore and analyze. The beat I got was pretty wild and odd-metered, almost Coltranesque, and somebody asked if I'd been under a lot of stress. Well, not anymore. Imagine if we had a heart on every street corner to tune into the pulse of the city!" 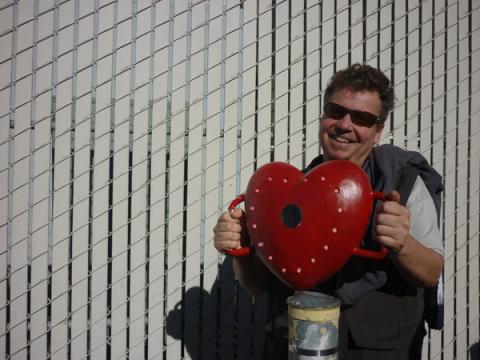 The author takes the pulse of the city. Photo by Debra Baida

As it turns out, somewhere in the crowd that day a Boston city official took note of the piece’s overwhelmingly positive reception and thought it would make a great addition to her city's streets. Not only was this a whimsical way to help people connect with their own heartbeat, but it could also be a boost to the mayor's health and fitness campaign and was in perfect alignment with Boston's New Urban Mechanics approach to civic innovation (which seeks to increase civic participation and improve city streets through experimental projects). She shared her impressions with her colleagues, who reached out to the interactive artist behind Pulse of the City, George Zisiadis.

"The real spirit of it was to create something that delights people and improves public space," Zisiadis explained to me when I talked to him on the phone recently about how he came up with the idea. Born and raised in the bustle of New York City, he noticed that while there's so much happening around us it was really hard to focus on what's happening within us. So amidst the chaos of the various rhythms of the city Zisiadis wanted to think of a way for people to connect with the rhythm of their bodies. "And the most natural rhythm of our bodies is our heartbeat."

"We were really just happy that people responded so positively at the Urban Prototyping Festival," he told me. "But," he quickly added, "when the City of Boston showed interest in taking it further we were glad to make that happen."

The Making of Pulse

When Zisiadis says "we," he means the four-person team of himself, his electronics wizard and housemate Matt Ligon, sound designer Rich Trapani, and visual fabricator Rachel McConnell. They used their complementary skills to take their original cardboard and auto body putty prototype, costing less than $1,000, to the final installation consisting of a fiberglass and steel encasement.

"You know, there's no heart store where you can just go and buy a heart," Zisiadis jokes. "So we had to build everything from scratch."

While it looks like a deceptively simple heart, Pulse of the City is actually a very complex piece of engineering. Aside from its uniquely built shell, there's a lot of code and hardware inside of it, consisting of an electrocardiogram sensor board, an Arduino microcontroller, and a Raspberry Pi (miniature computer), along with a 3G cellular modem, an amplifier, marine speaker and LED lights. In a nut-, or rather, heartshell, different heartbeats are detected through the cardio sensor, then filtered through an algorithm into unique sounds complementing each person's pulse. Additionally, the resulting tune is set to play in time to the heartbeat, reflecting a range of experiences, from, say, the uptempo beats of a jogger's heart to the more mellow grooves of a window shopper. 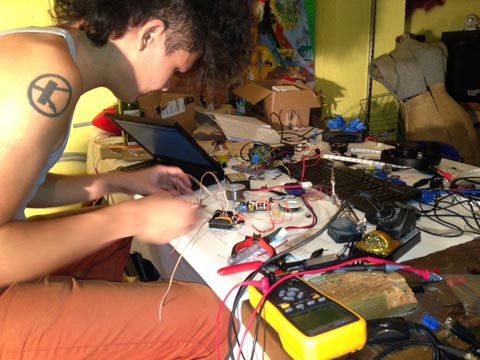 Part of the magic, as Zisiadis points out, is that all tech components of the heart are hidden. "I think that the technology should ultimately be in service of the story you're trying to tell." In the case of Pulse, it was clear to its creators from the get-go that while the back-end would be an essential element in enabling the magic that the heart engenders, all the wiring and coding would ultimately be a means rather than an end. "If we're going to create thriving cities and neighborhoods," Zisiadis cautions about the limits of technology, "I think we really need to focus on the messages, visions, and philosophies that people are trying to communicate."

Recognizing the potential of a design that subordinates its tremendous technological complexity to a simple, yet powerful human experience, Boston Mayor Thomas Menino himself approved the project. Better yet, The City of Boston offered to fund five installations around town, a stroke of good luck articulated on Zisiadis' blog with a healthy dose of disbelief: "Not only would I not need to go through any red tape, they would even fund it all. Even I knew that isn't how public art works normally. Where was all the hassle?" 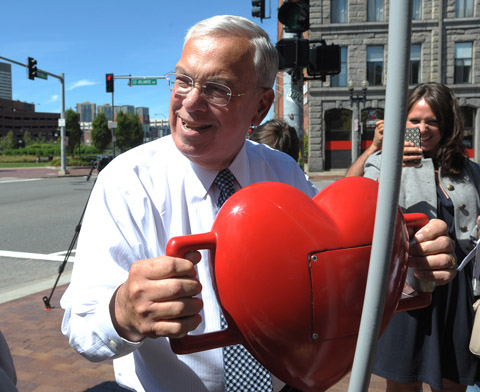 Boston Mayor Menino: "This is cool!" Photo courtesy Pulse of the City

Pulse of the City's magic seemed to have permeated all stages of its creation, but one challenge still lay ahead: to build the final pieces and make sure they were indestructible and weatherproof while still emanating beauty and engaging tens of thousands of people, and to do it in three months. For the team of polyrhythmic mavericks, this was just the kind of kick in the butt they needed to push them over the finish line.

They went to work on fine-tuning the aesthetics of the housing, the sound of the music, and the responsiveness of the code at their San Francisco digs before hauling the finished pieces cross-country for installation. The story wouldn't be complete without a few mishaps, like the electronics getting soaked by a rainstorm on the first day of installation. Despite the mishaps, all five units were firmly planted in their new homes by September 6th, much to Mayor Menino's delight. (His verdict: "This is really cool!") 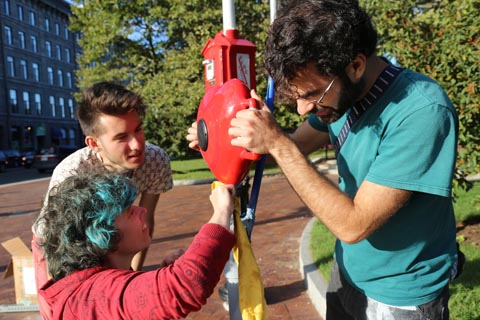 Spread throughout different Boston neighborhoods, the effervescent hearts are as much a testament to the power of teamwork in achieving a vision as they are to the necessity of giving untested ideas a chance if we are to re-imagine our cities and public spaces. Zisiadis can't say enough about the importance of being able to see how the public reacts to an idea at an early design stage. "You know, it took a fair amount of R&D and funding to develop Pulse of the City into a fully functional public art installation, but we would have never been able to justify all that had we not had a simple prototype working version to say 'hey, this works and it's something that people want.'" And speaking of funding, without the $1,000 starter grant from the Grey Area Foundation for the Arts to build the auto putty version, Pulse would have never seen the light of day at the Urban Prototyping Festival in the first place.

Talking to Zisiadis, the thing that struck me the most — perhaps even more so than the importance of urban prototypes — is how big an impact little tweaks to our urban environments can have. In a way, it's like we're all kids at heart, and it's rarely the big expensive toy that captures our imagination for long, but perhaps something as simple as a well-placed box of crayons. In the case of Pulse of the City, it's the shared experience it creates among everyone in the vicinity that triggers the transformation of a street corner, whether you're the one who is holding on to the heart or not. Like a hopscotch grid, perhaps, or a hoop and a ball.

For Zisiadis, it's this playful interaction that goes to the, excuse the pun, heart of it all. "Humans enjoy having fun. In fact, I think humans have a right to joy. Yet if you look around us in the public environment, the things we build don't reflect that assumption. So Pulse of the City co-opts the form of a parking meter, which is this ubiquitous boring gray thing that takes your money, to instead be an explicitly engineered item that induces happiness in people."

Everyone has a heartbeat

The keys to this intervention's success in making urban space more human are simplicity and accessibility. According to Zisiadis, one of the key factors driving the design was that any person on Earth would be able to relate to it. "Everyone has a heartbeat," he says, alluding to the universal spirit of Pulse. While the statement itself is not exactly breaking news, the message behind it speaks to a deeper truth that we ultimately have much more in common than we acknowledge, and listening to each others' amplified musical heartbeats affirms our common humanity. We all know how to laugh, dance, and breathe.

The other advantage of keeping a public art intervention simple and accessible is that it can easily be replicated on any city street across the world. Not only did the creators keep Pulse of the City small in design for that reason, but they made the pieces solar-powered in order to be easily deployed and self-sustaining, keeping in mind the ultimate goal of impacting as many people as possible. So Pulse really is a pilot in a broader sense, itching to go travel and spread its roots after its maiden year in Boston.

"One of the beautiful things about Pulse of the City is that it fits into and compliments any urban environment," says Zisiadis. "It's built for cities, and cities are increasingly part of the human experience. The idea that Pulse of the City could be in other cities and other countries around the world is a really exciting one, now that it's shown that it works well in Boston."

Intrigued by skyscraper ziplines or disco ball traffic lights? Inspired by Pulse of the City, George Zisiadis' current project Urban Imagination is an ongoing series of daily sketches inviting viewers to re-imagine the city as a canvas for fun, whimsy, and playfulness.