From Tucson, A Few Ideas on Brightening Your Neighborhood - Shareable
Skip to content 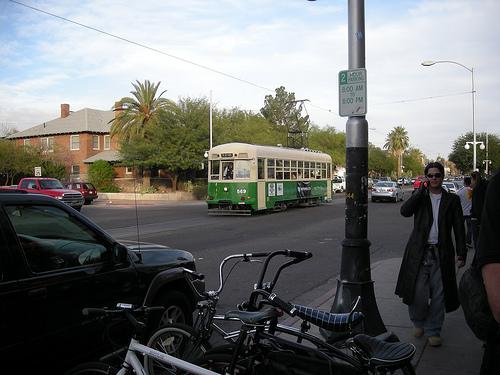 At first glance Tucson, like many American cities, appears an endless expanse of highways and strip malls. But hang around a bit and you’ll discover authentic neighborhoods full of mission-style bungalows or classic adobe buildings built decades before “Southwestern Style” became the rage in the 1980s.

My favorite part of town is the Fourth Avenue-University district—a hot spot for hearing music, hanging out at sidwalk cafes and browsing through indy businesses. I dropped by there last week before catching a flight home to the snows of Minnesota, and was struck by several things enlivening the neighborhood that could be adopted anywhere.

*On Their Trolley: Vintage streetcars clang their way along Fourth Avenue then turn up University Boulevard to the main gate of the University of Arizona. Operated by volunteer train enthusiasts, the Old Pueblo Trolleys have run since 1985 providing entertaining transportation and a special identity for the area.

*Courtyard Comfort: Just off busy University Boulevard lies the urban equivalent of a town green—a series of businesses fronting a small park that offers refuge from heat and hustle-bustle with shade trees, a splashing fountain, public benches, and a brick plaza. Built as a bungalow courtyard, a popular development style of the 1920s, the place now sports shops, a Mediterranean restaurant, a Starbucks and numerous offices occupying the charming old buildings. The classic urban form of Geronimo Plaza could inspire other projects, either renovations of existing courtyards or entirely new developments. The key is to make sure the courtyard becomes a thriving public space welcoming to everyone, and not a sterile space designed to make sure people don’t settle in.

*Live Music at Lunch: Here’s an even easier way to stir up some fun that does not involve laying track or constructing courtyards. It’s such an obvious idea, I’m surprised I’ve seldom seen it anywhere besides the Espresso Art Cafe on University Boulevard: noontime music. A talented classical guitarist serenaded diners, and many of us passing on the sidewalk. His playing elevated the whole block to new heights of urban enjoyment.