From A to F: Grading States on Small Business Friendliness - Shareable
Skip to content 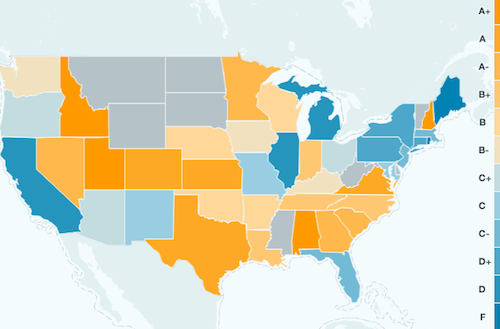 Small businesses account for 64% of new jobs created in the US. They are vitally important to the stability and well-being of communities and it benefits local governments to encourage small business development. But, according to a recent survey, not all states are equal when it comes to friendliness toward small businesses.

The Small Business Friendliness Survey, conducted by Thumbtack.com in partnership with the Ewing Marion Kauffman Foundation, found that there’s a wide range of friendliness, or non-friendliness in some cases, across the states. Gathering data from over 7,000 business owners nationwide, the survey then handed out grades from A through F to the states and their cities.

Utah, Alabama, New Hampshire, Idaho and Texas all received A’s while Hawaii, Maine and Rhode Island were given F’s. Among the individual cities, Austin, Virginia Beach and Houston received the highest scores while Newark received the lowest.

Other key findings from the survey include: