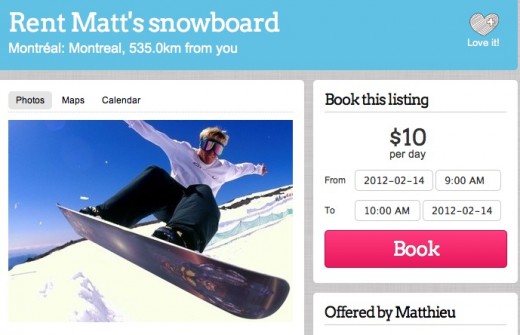 The collaborative economy has been at the center of attention in the startup ecosystem over the past year, with major, fast-growing players like Airbnb, SkillShare, TaskRabbit, and GetAround, and myriad platforms allowing P2P sharing of goods, services, or experiences.

Among them, Uniiverse got a pretty fair amount of coverage for its launch two weeks ago. Benjamin Tincq, Antonin Leonard, and Arnaud Auger recently met with Ben Raffi, Uniiverse’s co-founder and CEO, and asked him a few questions about his vision for the future of sharing and the collaborative economy.

1) A Platform for “Collaborative Living”

When asked how Uniiverse started in June 2011 (he and his co-founder Craig Follett were still BCG consultants at that time), Ben says: “We wanted to help people reconnect in real-life and share their passions. As a spearfisher and underwater-hockey player, I found it difficult to meet like-minded people to share my passions with. We also identified a white space in the market: No platform really allowed people to build the trust required for offline interactions.”

The idea of using online platforms to help like-minded people re-connect offline is not new, especially among sharing platforms such as Vayable, SkillShare, and TaskRabbit. But, while these focus on a specific segment such as experiences, time, or errands, Uniiverse aims to offer a universal platform for everything collaborative: “Let’s say Paul registers for a snowboarding competition on Uniiverse, then he might find a rideshare to get there, and a place to stay nearby, while finding somebody to sit his dog during the weekend.”

Uniiverse allows users to offer any real-life services or activities. This transversal approach aims to bring a solution to the “trust dilution” users face when using distinct sharing services: In addition to trust gained from social networks (i.e. mutual Facebook friends, for instance), users can build up trust from ratings and reviews on a wide range of activities and services: “If Laura gets positive reviews for a crash course on photography she hosted, other users might be more comfortable in engaging with her on more sensitive activities, like babysitting or borrowing a car.”

Recently, other attempts to tackle the trust issue include the new startup TrustCloud, which allows users to consolidate trust points and badges from various sharing and social media platforms.

There are three main drivers for activating “the sharing switch” in people’s minds: saving or making money, sustainability concerns, and meeting new people. Though financial drivers clearly are the most prominent in these troubled economic times, Ben hopes the social driver will be, in time, the main reason people join the site: “We saw several campaigns putting the accent on financial savings to promote sharing platforms. Though Uniiverse allows anyone to become an entrepreneur, ultimately we believe the true driver for sharing offline will be the social bond, not money. This is why we allow people to offer both free and paid activities.”

The platform is open worldwide, although their initial focus is on Montreal, Toronto, San Francisco, and Boston. They’re planning to push their marketing efforts to new places very fast — major U.S. cities should follow in the next few weeks, as well as other countries. “A lot of companies have followed a strict city-per-city roll-out, but realized that it did not make much sense. If people are ready, it will take off. We are planning on going global quickly, which is why we have built the technology with multiple language support from day one.”

But unlocking all cities at the same time alone is not sufficient. In the collaborative economy, community engagement is key in order to reach critical mass, the turning point at which a service can sustain itself. “We are really investing in the community. The critical point is making sure that everyone has a great experience using the service.” To make sure of this, Ben and his team regularly use Uniiverse and join activities with their users, to meet them, and get their feedback.

Uniiverse has currently secured $750,000 in funding to cover development costs, as well as marketing, public relations, and an upcoming ambassador program. The team is composed of 10 people, as of now, and is planning to raise new money quickly. Its current business model relies on transaction fees (none are taken on free services), but Ben foresees alternative revenues for the future: “We have other revenue models in mind, but our focus, at this point, is on building a great product together with a community of people who love the service.”

In terms of competition, the main player out there is probably Craigslist, especially because of its scale. Ben does not consider other experience and service marketplaces (such as Vayable, TaskRabbit, or Gidsy) as direct competitors because of their focused approach. Time will tell if Uniiverse’s universal platform for all activities and services is a winning strategy.

Benjamin is a Co-Founder of OuiShare, a global community of entrepreneurs, journalists and enthusiasts working for the Collaborative Economy through online and offline projects (coming up soon!), currently based

Benjamin is a Co-Founder of OuiShare, a global community of entrepreneurs, journalists and enthusiasts working for the Collaborative Economy through online and offline projects (coming up soon!), currently based in the lovely Paris. As an Innovation Consultant and design thinking advocate, he is passionate about people, technology and business models, and how they work together for open and disruptive innovation with positive social impact. Twitter : @btincq https://about.me/btincq

Things I share: Ideas, Knowledge, Inspiration, Music, and a lot of Love.