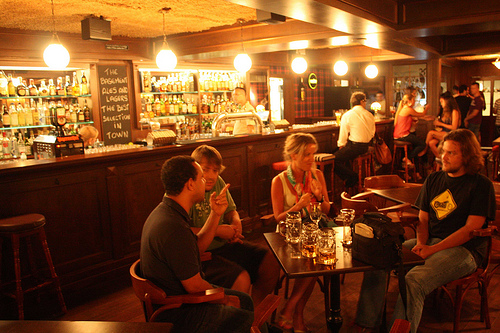 As market forces and advances in technology are pushing TV into places we wouldn’t have imagined it being a mere few years ago, we now have to do something pretty much unprecedented.

In the interest of maintaining civilization values, we now have to positively define the essence of a media-free place of hospitality. Sociologist Ray Oldenburg called for the idea of a “third place,” a hangout that’s not work or home, and where conversation and interaction are encouraged. Now that Starbucks – which often features advertising screens and wifi, ensuring that the only exchange you’ll hear is the clicking of laptop keys – has actually adopted “third place” in its marketing, perhaps Oldenburg’s ideas need some bolstering and fleshing out.

So what are the special characteristics of real places? What kinds of bars, restaurants, and cafes would we like to see emerge and counter flatscreen culture?

A sense of humanity: Walk in, and you and your fellow diners are the most important thing in the room. Ordinary human interaction, spread out like a net across the room, is the drama that takes center stage. No flashing distraction is needed to fix your assumed withdrawals from media addiction; the place acknowledges you’re comfortable enough with your own mind to let it expand into the room.

The honoring of ritual: Sharing food and drink with others is treated as the important, epicurean rite it is. The staff enjoy being there; they’re friends with each other; they’re friends with you. The outside world’s schedules and timetables are somehow softened within their borders. You’re truly welcome to stay and take your time.

Confidence: The establishment must believe in its own four walls, even when business is slow. When tables are empty, even the anti-TV stalwarts must be tempted to fill up their venues with some kind of comforting noise. But genuine atmosphere is capable of accommodating occasional silence and stillness, two endangered species in this modern life.

Atmospherics: Hand-picked music played at conversational levels, flattering lights, local art on the walls, eccentric candles – there’s no single thing that instantly creates atmosphere; it’s usually an array of things that impart a sense of having naturally emanated from someone’s friendly mind. But you know it’s the real thing when your surroundings evoke a sense of relief at being there.

Jen Burke Anderson is a writer, thinker, and activist obsessed with media, cultural democracy, common values, and the impact of ideas on society. She writes about music, film, media, culture,

Jen Burke Anderson is a writer, thinker, and activist obsessed with media, cultural democracy, common values, and the impact of ideas on society. She writes about music, film, media, culture, politics, and society, usually with a humorous bent and spirit of self-inquiry. In early 2002, responding to the lack of analysis and global perspectives in the U.S. news, she established the weekly newsletter News You Might Have Missed, which continues to round up underreported stories from around the world and from our own backyards, and present them in a succinct, easy-to-read format (www.newsdesk.org).