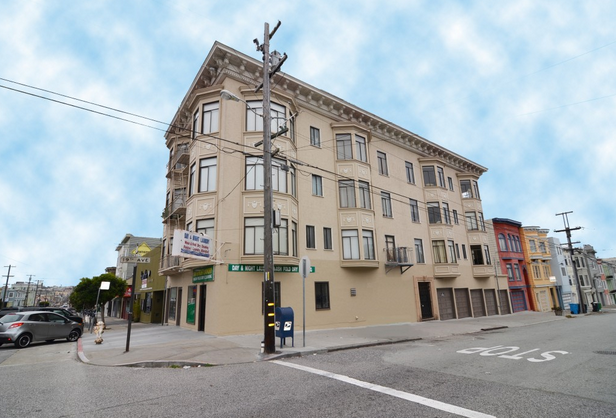 The first Foundation House, pictured above, is located in the Richmond district of San Francisco.

Brewster Kahle, founder of Alexa and the Internet Archive, just launched a radical new housing experiment that could substantially decrease housing costs for nonprofit workers in the San Francisco Bay Area and, hopefully, beyond. By placing a covenant, or legal clause, on a recently purchased apartment building in the Richmond district of San Francisco, Kahle will be able to offer units to the staff of Internet Archive and other partner nonprofits at cost.

If the Foundation House is successful, Kahle hopes to scale the model and create a “housing class that would be of enduring value to people in the nonprofit sector.” Nonprofit workers rarely see the kind of benefits offered to corporate or government employees, and Kahle believes a cost reduction in housing would provide a level of stability that those who have dedicated their lives to service deserve.

I recently had the opportunity to ask Kahle how much influence San Francisco’s rising income inequality had on the creation of the Foundation House, how exactly it functions as an endowment for nonprofits, what qualifies a nonprofit worker to live in a unit, and whether or not Kahle expects the arrangement will facilitate higher levels of sharing than in a traditional apartment setting.

Jessica Conrad: What inspired you to create the Foundation House?

Brewster Kahle: I lived in cooperative houses in my twenties, but the inspiration for foundation housing came from the challenge nonprofits have in supporting their employees, especially at times when rents are unstable or really high.

At Internet Archive, for example, our biggest expense is people; our employees’ salaries make up about 80% of the budget. The biggest cost to our employees is housing, and the biggest cost of housing is debt service. If we could find a way to transition housing over a course of decades from being debt burdened to debt free, we could create a housing class that would be of enduring value to people in the nonprofit sector.

So we started the Foundation House. As market-rate renters naturally move out of the apartment building, vacant units will be offered to Internet Archive employees and potentially employees of other nonprofits as well. Those individuals won’t have to pay the debt service, which means they can live in a unit at cost—paying only about one third of the market rate—while they work for partner nonprofits.

Jessica Conrad: I’ve lived in San Francisco and know that the city is incredibly expensive. How can you afford to charge 30% of the market rate for apartments?

Brewster Kahle: A foundation just bought the apartment building for our first house. That’s very fortunate and not something everyone can do. But across the U.S., apartments are priced based on the cost of maintenance, taxes, insurance, and the debt service to pay for the mortgage. If you have market-based renters in the building for a long time—say 12 to 15 years—the building will be paid off, even if there wasn’t any money put down. The idea is to put a covenant on the building when it’s purchased so that it can never be put under debt again once its original debt has been paid off. And if there was no original debt, that’s fabulous.

Jessica Conrad: How much of what you’re doing with the Foundation House is driven by the rising income inequality in San Francisco?

Brewster Kahle: It’s true that San Francisco has particularly expensive real estate, but people also receive higher salaries. It turns out that the challenge we have in San Francisco is the same challenge people face everywhere: According to a MacArthur-funded study at Harvard, rent in the U.S. requires 30 to 60% of people’s gross income, and the poorer you are, the closer to 60% you pay for rent.

Jessica Conrad: Can you explain how the Foundation House functions as an endowment for Internet Archive and other partner nonprofits?

Brewster Kahle: I’ve been trying to describe foundation housing from different stakeholders’ points of view. From a donor’s perspective, foundation housing is a form of endowment that could help make a nonprofit permanent. Typically, a donor wishing to create an endowment would put cash into Goldman Sachs, a company that would then invest the money somewhere and later give some percent back to the nonprofit. From my observations, those returns are usually only about 2% over inflation, and they are completely detached from actual need, which in the long term is housing.

From the nonprofit’s perspective, foundation housing is a great benefit to its employees, especially if the house or apartment building itself is a separate nonprofit. I’ve seen people donate buildings to schools and hospitals, but those buildings often get sold and put back into the debt-based mortgage world. By structuring the Foundation House as a separate nonprofit that can potentially serve multiple organizations, we hope the entity will stay around for decades, work off its debt, and keep it off. It’s kind of like a Nature Conservancy for housing.

From an employee’s perspective, foundation housing is a solution associated with his or her place of work. In many ways it’s not dissimilar to housing offered by universities, hospitals, or the military. If the employee leaves the nonprofit, however, he or she may also have to leave the house. This is certainly a drawback and does decrease the value to the employee.

Finally, let me sort of go off the rails for a minute. Let’s say I’m a 100-year-old house in San Francisco. Sure, I can understand why I would be under debt for the first 30 years of ownership. Someone invested a lot of money to go and build me. No sweat. But because that debt was paid down once, shouldn’t I be debt free now? It just doesn’t make sense that I would still be burdened with debt.

Jessica Conrad: Are there comparable affordable housing options for nonprofit workers in other U.S. cities?

Brewster Kahle: There are affordable housing options associated with very large organizations, such as universities and hospitals. Churches often have housing for pastors, too.

What I’d like to do is take the good idea that is available to those large, established organizations, and make it available to the smaller, more entrepreneurial nonprofits, such as Wikipedia, Internet Archive, Electronic Frontier Foundation, Mozilla Foundation, and Shareable. They’re doing really fantastic work and are full of bright young people, but none of them have the history required to have had someone donate a building decades before.

Jessica Conrad: It sounds like you plan to create additional foundation housing.

Brewster Kahle: Yes, the dream is to transition 5% of all housing into a new housing class that would be dedicated to supporting the nonprofit sector. We currently have public housing, which makes up about 2 or 3% of American housing, and private housing. But I think private housing is a misnomer because it’s almost all mortgaged. Banks today aren’t the same as those from 100 years ago. What we have today are major corporations! To my mind, private housing is actually a form of corporate housing. What we need is a system for supporting nonprofits that can endure.

Jessica Conrad: What qualifies a nonprofit worker for an apartment in the Foundation House?

Brewster Kahle: Whoever funds the foundation housing would get to decide who benefits. It doesn’t necessarily have to be for nonprofit workers; it could be for teachers, unions, or just general affordable housing.

With the original Foundation House, I’m trying to stabilize service. Nonprofits are now starting to serve many of the roles that government used to serve. For example, I work in a nonprofit library. Why isn’t it part of the government? In another era it might have been, but it isn’t anymore. If more and more government services start to decline, I think we’re going to need more nonprofit structures. When people dedicate their lives to government service, for example, they can get lifetime pensions, but nonprofit workers can’t. The challenge lies in providing a level of stability to people dedicating their lives to service. Foundation housing is an idea. It’s an experiment.

Brewster Kahle: No, we just closed on the apartment building this fall. It’s nearly full of market-rate renters right now, so we’re waiting for them to move out at their own pace. This is a long-term idea; we don’t want to pressure or evict anyone.

Jessica Conrad: Do you think the Foundation House will facilitate sharing between residents?

Brewster Kahle: I think it actually would be beneficial to live with other people that work in other nonprofits. I think it could build community in a profound way.

The Foundation House is a fantastic concept for helping nonprofit workers save loads money and, as Kahle suggests, build a strong community. At Shareable, we believe this new housing model also has the potential to facilitate other forms of sharing. What else do you think Foundation House residents could share beyond just a roof? We’re curious. Please share your ideas in the comments below!

P.S. Here are a few questions to get your creative juices flowing:

Can you recommend sharing-based transportation strategies for Foundation House residents?

What solutions could the Foundation House implement to increase the building’s energy efficiency and lower the cost to residents?

How might residents collaborate to save on their individual grocery bills?

Can you suggest ways for residents to share entertainment and recreation equipment or tools?

Are there practical ways for Foundation House residents to share their skills?