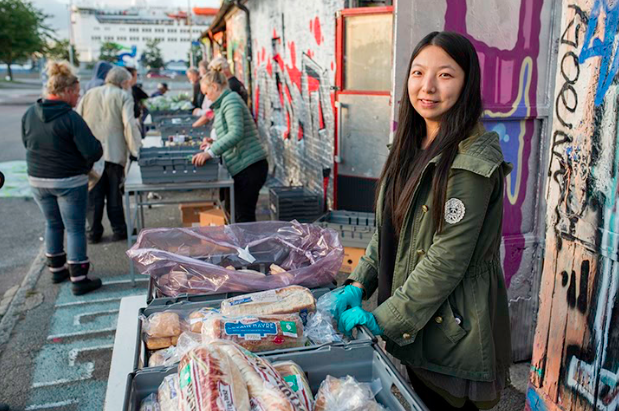 A Solikyl volunteer waits for someone to approach her table. Photo credit: Rikard Rensfelt

It’s more hands-on than soup kitchens or free-food giveaways, it strengthens the commons — and you can even do it during a pandemic.

It’s called foodsharing, and the way it’s growing in Gothenburg, Sweden, just might be a model for the rest of the world.

Foodsharing is a practice developed in Germany, where volunteers visit grocery stores, bakeries, restaurants, and other such businesses, to collect high quality food that would otherwise have been thrown away.

Although making use of excess food is not new as a practice, a German website, Foodsharing.de, has enabled community groups to form quickly and organize effectively.

The phenomenon has since moved to non-German-speaking countries with the help of Karrot, a website that enables groups of people to organize around collecting and distributing things — such as old clothes, bicycles and food — that would otherwise be thrown away.

Gothenburg, Sweden’s second largest city, is home to a variety of initiatives that support resource sharing between individuals.

This includes the foodsharing group Solikyl, which reorganized its practices as the pandemic swept the country, learning how to minimize exposure to the virus, while also expanding its partnerships.

Solikyl — which translates as “solidarity fridge” — organizes itself as a food commons. Unlike traditional charities, which rely on volunteers to collect and distribute food to clients, Solikyl and other foodsharing groups organize themselves to help one another.

Thus, the people visiting the grocery stores to pick up food donations are also allowed to use the food themselves.

This eliminates the hierarchy between those who save the food from being wasted and those who need it.

It also makes clear that the excess food they’re collecting is good to eat — it’s not a bag full of undesirable, second-class throwaways.

In this way, Solikyl tries to create a food commons — food resources available to all regardless of need.

Food is in many respects already a commons. Humans all need to eat three times a day, making food production, along with clean air and water, an essential aspect of our well-being.

We have a limited supply of arable land and fresh water which we all share for food production. Agricultural land is a valuable common resource, regardless of ownership systems, which is sometimes preserved from development through land trusts.

Seeds have traditionally been seen as a common resource, with no one owning the genetic knowledge in traditional plants. We share cultural practices related to food such as recipes and food traditions.

Commons are traditionally thought of as natural resources — such as air, water, pastureland, or fisheries — which can be used by more than one person at a time, and which are available to users at all times.

However, some types of commons — including resources such as libraries, city parks, sharing libraries, or community gardens — are produced through social practices.

Solikyl aims to create the latter, a food commons, where food is seen as a shared resource through social practice rather than as a private good.

One woman got involved with Solikyl after hearing someone speak about foodsharing, because she knew she could get her local grocery store involved.

She now helps coordinate food pickups not just from the grocery store, but also a local bakery and a sushi restaurant.

The food that is collected and distributed is near or past its “best before” date — but is still good to eat. (Many people believe that “best before” dates are expiration dates, but the dates are created by the company as an indicator of freshness not of food safety.)

In other cases, half of a box of fruits or vegetables might be slightly imperfect and the rest will be ideal. In addition, bakeries give away large quantities of unsold bread and sweet buns.

Up until the pandemic took hold, they would bring the food they collected to a busy local community center that gave them access to the refrigerator, freezer, and a shelf for dry goods.

The community center was very convenient, the woman says, “because it is always open and very busy, so we don’t need to have a special time for distribution.”

However, the parish went beyond government guidelines during the pandemic and the community center has been entirely closed since March, possibly due to the prevalence of retired folks who visit the center, and foodsharing has had to move to other locations in the city.

Organizing against the pandemic

Solikyl’s founder Bruno Chies is originally from Brazil. He started the organization in 2016 after seeing foodsharing in action in Germany.

When the COVID-19 pandemic took hold, he said, Solikyl was able to grow, evolve, and fill a need that traditional food programs weren’t able to.

He describes a local “people’s kitchen” that had been providing low-cost community meals “with the saved food from the grocery store” to large groups of up to 80 guests.

After the pandemic, the national government prohibited meetings of 50 people or more.

Solikyl, which had changed its distribution practices to avoid large groups of people, stepped in at the point to work with the grocery store and collect the unwanted food.

Dan Lundberg, a Solikuyl volunteer, said that foodsharing has moved outdoors, where they can ensure that the line is spread out.

They also use gloves, hand sanitizer, and some people wear masks.

“If we can’t do the food distribution outside,” he said, “we do it inside and allow five people in at a time.”

Per Björklund was just finishing up his volunteer shift with Solikyl when I spoke to him.

“We set up boxes on tables,” he says. “They tell us what they want and we hand it to them.”

In the industrial Gamlestaden district, he added, “we have a porch with a used bike inner tube hung across it as a barrier. We tell them what we have and hand it out to them. In the past, they handled the food themselves.”

Per says that some people like the new system better, because there is less of a “grabbing mentality.” He said that “sometimes the person who is stronger or who has a bigger bag gets more.”

Per found that the new system increases solidarity among participants, since the division of food is more likely to be equal.

One drawback to the new system is that both food and people have had to wait outside amid the summer heat. Per said that people wait on the shady side of the building and that they do their best to bring refrigerated items out in batches as needed.

Commoning during the pandemic

In these ways, by innovating and adapting, Solikyl has followed Swedish national guidelines for avoiding large assemblies and enclosed spaces — while still continuing their work to reduce food waste.

Creating common resources is one way that community groups are restructuring our communities to be more efficient, while also ensuring that everyone can access the resources they need.

Solikyl demonstrates that with appropriate planning and care, there are ways to continue commoning even through a pandemic.

Naomi is a PhD student at the Swedish Royal Institute of Technology in Stockholm. She is studying foodsharing as it relates to the commons. Originally from Minnesota, she enjoys exploring

Naomi is a PhD student at the Swedish Royal Institute of Technology in Stockholm. She is studying foodsharing as it relates to the commons. Originally from Minnesota, she enjoys exploring European mutual aid, alternative currency, and local food initiatives whenever possible.