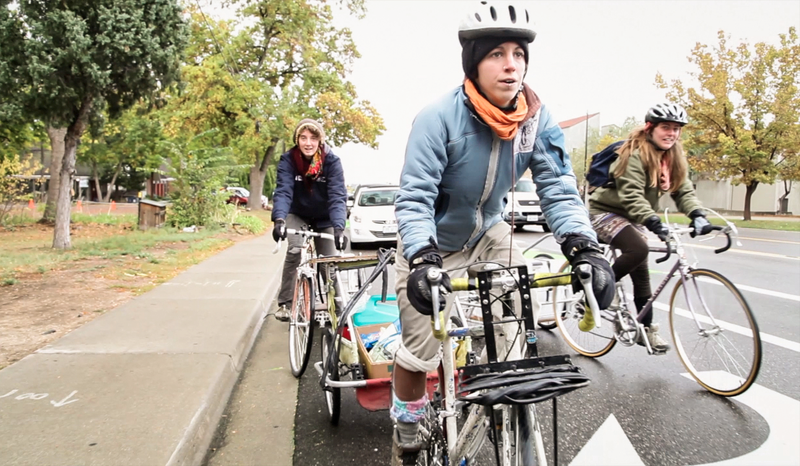 A group of three impassioned friends, all under the age of 30, started Boulder Food Rescue in August of 2011 with the goal of introducing the problems of waste and want to one another, and with the help of a little logistical muddling on our part, letting them solve each other.

It’s a shocking fact that 40% of all food produced in the US goes to waste at some point in production. The EPA estimates that every grocery store in the country generates about 1 ton of waste per day, which doesn’t even touch waste in the field or in transport. This (almost inconceivably) occurs at the same time at 1 in 6 Americans are considered “food insecure” and do not have access to adequate and reliable nutrition.

We set about addressing this lunacy in our own community of Boulder, CO by starting an organization that picks up food, primarily fresh fruits and veggies, from local grocers and transports it by bike to 50 agencies that serve hungry, homeless, and low income folks in Boulder. We use 90% bicycle transportation because our food system is incredibly energy intensive, and it makes no sense to put more fossil fuels into trying to rescue food that slips though the cracks.

Over the past 20 months, Boulder Food Rescue has amassed a volunteer base of 150, saved nearly 325,000 lbs of fresh, healthy food, and is in the process of becoming a national non-profit. This last point has been our focus over the past several months as we began to export our bike powered food rescue model to 5 different cities. Due to some national press coverage, we had people from 25 different cities around the globe from Dublin to San Francisco contact us to ask for support in rescuing food.

In March, with the help of a Shareable seed grant, we decided focus our work to replicate the program on an inspiring group of people in Fort Collins, Colorado. An already close knit group of friends and community members came to us and asked for some help establishing a food rescue organization with bikes in Fort Collins, which is just an hour and a half by car from Boulder. This initial ask was followed by meetings and long email chains and countless hours of community-based research. We became a primary resource for them, and in our weekly correspondence answered questions about how to best approach community partners, access non-profit status, and recruit volunteers.

We also wrote and produced bound copies of the “BFR Package Deal,” a step-by-step guide to starting a food rescue, which proved to be invaluable to them as they could refer to it for local and national resources, and feel a greater degree of independence. We encourage  lots of inquiry and communication with organizations that were already working with food in Fort Collins. This led to many conversations with the local food bank, gleaning project, food coop and network of community gardens about the role a potential food rescue would fill in their operations. Once the organizers were confident that a bike-powered food rescue was timely and appropriate for Fort Collins, we together set about creating the beginnings of an organization; bylaws, a board of directors, and a mission statement. One Fort Collins organizer said of this initial stage, “It is a genuinely beautiful act of strength to get something like this going and I can’t wait to be a part of this beginning.”

The Fort Collins Food Rescue crew was filled with enthusiasm and energy, but had the same problem we did at our inception: the issue of how to become a nonprofit since the project relies on tax deductible donations. We at Boulder Food Rescue were working hard to become nationally tax exempt so that we might extend out 501c3 status to Fort Collins and several other cities, but had run into frustrating road blocks internally and with the IRS.

In a display of resourcefulness, one of the Fort Collins organizers, Dana Guber, suggested that food rescue in Fort Collins be housed under the nonprofit status of the Growing Project, a local organization that promotes the value of a strong, diverse and just local food system for all residents of Northern Colorado through direct agricultural experiences, education, and advocacy. The group carefully weighed their options, and decided that the best way to serve their community and rescue food was to become a project of the Growing Project. They adopted the name Food Finders and completed their first pick up by bicycle last week, which was a whole bunch of fresh, healthy greens!

The past few months have been an intense learning process for both Boulder Food Rescue and the newly christened Food Finders. We learned to be an incubator for a fledgling organization, and help them create a vision for the future. We have gained a greater understanding that federal paperwork doesn’t happen on our schedule and learned how we can balance sharing our model and providing support with granting full autonomy to the people who use it.

The folks in Fort Collins have learned a great deal about patience and persistence in starting a new project, and have experienced sweet success as a result of their work. A Fort Collins organizer reflected: “We are capable of preventing food waste and, more universally, spreading knowledge to strengthen the community. Being a part of Fort Collins Food Rescue has given me an empowerment that I don’t feel is leaving any time soon.”

Learn more about Boulder Food Rescue and how to start your own city food rescue program.