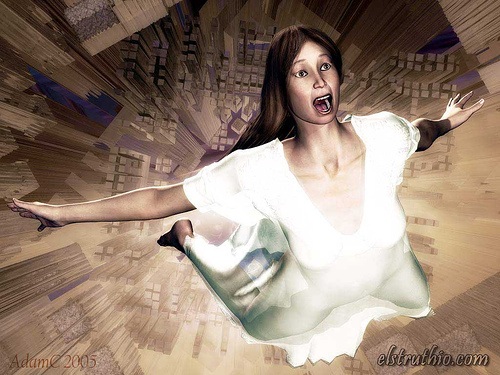 You’re on the 236th-level Kaiserstrasse moving sidewalk when you see her.

You’re leaning on the railing, waiting to ask Derya about a job, watching the glittering stream of mites that arc over half the sky — flying up to rewind their nanosprings in the stratospheric sunlight, flying down to make Frankfurt run. You never get tired of watching them.

She’s on the Holbeinsteg bridge. Someone’s hung it up here — a hundred meters of clean gray and green twentieth century modernism, plucked up from the river Main and suspended in the chilly air 2360 meters up, between a lump of wooded parkland and a cluster of antique subway cars. She’s wearing a 1950s sundress and a broad-brimmed hat, and it’s like an essay on the last century — the austere steel bridge, the bright blobs of subway graffiti, and her yellow dress, flapping against her legs as she climbs over the bridge’s rail. A picture of elegance and style from the age of money, violence, and simplicity.

She’s a strawberry blonde, slim, her skin blank and virginal as new butter. She’s beyond the rail now, hanging out over the mountain-high drop. Thin translucent shadows move across her — the shadows of the neosilk-and-nanotube filaments that hang the city from the hundreds of five-kilometer-high towers that encircle it. (A civic agent notices you noticing, and attaches itself to your infospace, whispering statistics — “Each object’s suspension must weather a class 5 hurricane and the destruction of 80% of the towers” — “Frankfurt’s current population is stable at 53 million” — “average age 62, birth rate 0.22, net immigration of half a million a year” — “Current personal squatright: 311 cubic meters per resident” — until you brush it away).

You’re watching her lean out. The wind whips her hair, ruffles the skirt around her knees. She must be a tourist. You remember your first trip to the upper levels: leaning over the edge into the angry swarm of mites, whirring and buzzing warnings and shoving you back like a million mosquito chaperones. Everyone tries it once —

Except that there aren’t any mites around her.

You clutch the railing. Hot, animal fear surges in your chest.

She looks up at you and, across the gap of forty meters, smiles a brilliant, heartbreaking smile.

Then she lets go and falls.

“Fucking airsurfers,” says Derya. He steps off the moving sidewalk near you: tall, hook-nosed, the fashionable whorls of pox and acne making constellations of his cheeks and chest, the glowing, formal tatoos of his committees and lifebrands adorning his massive triceps. You swallow on a dry throat. Derya, of all people, hearing you scream!

He gives you a hooded look. “They infect themselves with some designer virus — it lets them hack the city’s person-recognition systems. So the mites don’t see them when they jump. Watch –”

She’s swept past the whalelike oval of the public pool on the 202nd, past the sloping mandala of the Google offices on the 164th. At the 131st, just below her, is the old Stock Exchange, hung upside-down now as a hipster den.

Now the mites are finally closing in. A silver swarm coalesces around the 172nd, and she vanishes into it, like a snip of scallion into cloudy miso soup. When the cloud disperses, she’s standing on one of the Stock Exchange’s upside-down overhangs. She waves, antlike, then crawls through a dormer window.

“Don’t you quote the founders at me,” Derya snaps. “The Free Society is fragile. The minute enough people find anticontributive behavior cool, the party’s over — it’s back to capitalist competition or state control.” He stares until you meet his eye. “You even talk to those people — are you paying attention? — you even *talk* to them, your rep will be trashed on *all* the major servers. You won’t work, you won’t party, you’ll be defriended by every one of your tribes. Got it?”

Her broad-brimmed hat is still sailing on the wind. The mites missed it. It cuts between the towers of the 50th.

The upside-down trading floor is deserted. There are heaps of yellowed Euros and Deutschmarks dumped here, like snowdrifts. Wood panel, marble. Silence. And the air is strangely clear. You realize: no mites. The city has no eyes or ears, here. You walk through empty, miteless rooms, stepping around light fixtures.

Then she’s there, in a doorway. Her eyes, bright blue, radiant. Her smile, with that chaste yellow dress, so bashful. She comes to you.

Eyes closing, she leans in for the kiss.

This story originally appeared in the science journal Nature. Rosenbaum has been blogging about his efforts to write a sequel to “Falling” for Shareable.net, and we are happy to announce that he was successful: Please read “The Guy Who Worked for Money.”

Benjamin Rosenbaum is the author of The Ant King: and Other Stories. His stories have been finalists for the Hugo Award, the Nebula Award, the Theodore Sturgeon Award, the

Benjamin Rosenbaum is the author of The Ant King: and Other Stories

. His stories have been finalists for the Hugo Award, the Nebula Award, the Theodore Sturgeon Award, the BSFA award, and the World Fantasy Award. In his day job, Rosenbaum has designed software for the National Science Foundation and the D.C. city government, and was one of the founders of Digital Addiction (which created the online game Sanctum). Born in New York but raised in Arlington, Virginia, he received degrees in computer science and religious studies from Brown University. He currently lives in Basel, Switzerland with his wife Esther and children Aviva and Noah.