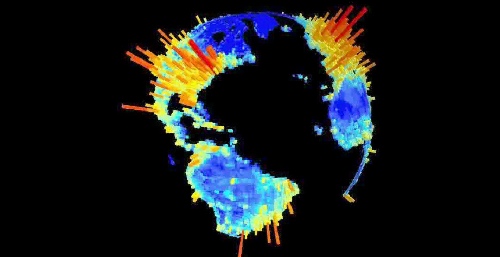 Among the questions she posed: Where does our money go? And how can we create a positive future?

The way we currently invest and do business, we’re funding a system that we don’t always understand too well. Yet with most global financial transactions being focused around the same large financial institutions it’s very challenging for one to move away from contributing to an already failing system. While it’s a failing system from our point of view, it’s a great success for large financial institutions.

With my background in banking with one of the largest US Banks, it was interesting to consider how hard it was for most people to live outside of the system. We’re tied into it without knowing where our investments go and how our loans are really funded.

Catherine discussed how the United States is the Global Leader in laundering money. If you were to stop the flow of all drug money, our stocks would go down, and our taxes would go up. This is what she referred to as “the red button problem”.  Would you push the red button and stop the flow of these illicit funds knowing that you’re going to lose money on your 401k?  You can find more information about this on Narconews.

Over the last 15 years, we have been centralizing the economy through NAFTA and GATT. Local labor now has to compete globally in all countries.  We knew then that jobs and money were moving to the emerging markets. In 1995, The California Public Employees’ Retirement System (CalPERS) started moving its investment overseas instead of the US. During the same year, a big percentage of Federal spending disappeared due to securities fraud. In the 1990s we issue massive amounts of fraudulent paper (mortgage securities), and when it all failed, we bailed it out using tax payers – a sort of leverage buy-out of our own country.

The business model of planet earth is the central banking warfare model: central banks print money and the militaries take it. The currency is a communications system, a way to communicate value.

The majority of money our communities invest usually goes to companies that we don’t really like: Large corporations, banks, the corporate media, government, oil companies, defense contractors and many more.

The housing bubble was a great success for the banks: trillions of dollars of wealth were pulled out of the US while Wall Street gets the biggest payout of history this year. The crowd will always support the criminal because the criminal has more money to hand out.

How do we change the way we do business?  Going local? How can we remove the intermediaries?

Can we change our communities from feeding the centralized institutions, e.g,  large banks, corporations, and the US government to a more financially intimate community that feeds your local diversified businesses and local currencies?

“Don’t worry if there is a conspiracy. If you aren’t in one, you need to start one. Start Solari Circles….” -Catherine Austin Fitts

You can also view the entire replay of the event here.