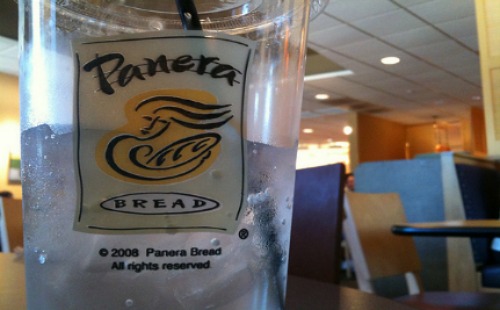 Most people are familiar with the St. Louis Bread Company (or Panera Bread Company as it's known outside its home state of Missouri) as a chain restaurant serving hearty, relatively healthy food at a reasonable price.

Enter one of the newest St. Louis Bread Co. cafes in the Gateway City, and instead of the usual menu board listing of those reasonable prices, you'll be greeted by sign at the entrance that says: "Take what you need, leave your fair share."

The "pay-what-you-can" cafe is the brainchild of former Panera executive Ron Shaich, who says it's an attempt to "see what human nature is all about."

Shaich, who stepped down as the company's CEO last week, converted a former Panera-owned restaurant in an urban area of St. Louis into a non-profit restaurant where customers who can't pay are asked to donate their time instead.

Cashiers at the cafe take orders, but don't collect money–instead they provide customers with the retail value of their food, and direct their attention to one of five donation boxes in the store. Money collected is used to by food and supplies at the cafe.

Although it may seem radical, this idea of feeding people regardless of what they can pay isn't new. Denise Cerreta, founder of One World Everybody Eats has been helping communities open no-charge restaurants since 2006.

Shaich says he started the Panera Foundation so that "everyone who needs a meal gets one.” Despite industry skepticism about whether the concept will be sustainable, the entreprenuer has plans to open two more of the non-profit cafes in two more cities in the next six months.

As part of its commitment to the local community, the first location in Clayton, MO recently launched a job training program for at-risk youth. Working with Covenant House Missouri, the Panera Cares Cafe developed a transitional program designed to offer useful skill development and new opportunities to inspire positive personal and professional growth.

The Foundation hopes to launch similar job training programs at the other community cafes in Dearborn, MI, and Portland, OR, this summer.