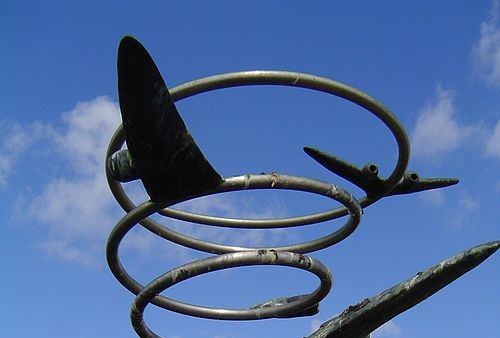 It’s October 2010, and I’m reclined in an all expenses paid seat in business class on a flight to Berlin. I’m going there for two weeks to collaborate on a video project with a couple of artists I met online, then flying to Amsterdam to present the video to a room full of bankers at the largest financial services conference on the planet. I’m not a media producer, nor do I work in the financial industry. All I can think to myself is “How the hell did I get here?”

Rewind about a year and a half, and I’ve just started an MA in Media Studies at the New School in NYC. I have a vague sense that the Web is the future, and I want to understand what that means. I make the commitment to do the program full-time for two years. My husband thinks this might be my way of avoiding “getting a real job” for a while.

The thing is, I had a high paying corporate job. Between salary, benefits, and the free car, it was paying me well over six figures. Though rather soul-deadening, I had no idea what the alternative would be, and I was scared to lose the sense of security the job afforded me. I figured I’d just keep doing it until I had a nervous breakdown or they fired me – whichever came first.

Turns out it was the breakdown, but not the way I imagined.

I got a call from my father one afternoon telling me my mother, a vision of health at the age of 49, was in the hospital because of some stomach pain. Hours later she was diagnosed with stage four terminal ovarian cancer. It was completely out of the blue, and we were shocked. For her own reasons, she chose not to do the surgery or heavy chemo, and instead tried to rely on natural and alternative therapies. She fought bravely, but ultimately passed away shortly after her 50th birthday.

This was a pivotal moment for me, and at 25 years old I was asking myself “What the fuck am I doing with my life?” I realized how quickly everything can change, and I refused to waste any more time doing a job that left me empty. Why bother being unhappy when I could be dead tomorrow?

I was determined to find a calling that brought meaning and purpose to my life, and spent time trying several different things. Finally, after being involved with a web startup and feeling invigorated by the pace of change and innovation in the area, I made the decision to go to grad school.

Though I didn’t have a vision of where my studies would take me, I was constantly inspired by how social media was being used to affect positive change in the world. So I started a blog (Emergent by Design) and observations of what was going on. I got on Twitter too – not to amass followers, but to discover information faster and from curated sources.

Without really paying attention to what was happening, my blog started getting more and more readers, and my network on Twitter continued to grow. My strategy was pretty simple: respond to each and every comment left on the blog in a respectful, well thought out manner. Reply to every tweet and retweet. Invite generative dialogue.

By doing this, I started building actual relationships and trust with people, even if it was only in 140 character bursts or short comment replies. I found that the web can be an effective medium for building community by being honest, expressing authenticity and vulnerability, and leading by example when it comes to the kind of interaction and engagement one expects to receive. Curiosity and playfulness help too.

The more ideas and explorations I put out there in my posts, the more it attracted like minded individuals from around the world to respond, give me feedback on my thoughts, and offer amazingly helpful links and resources I would not have found otherwise. People wanted to help me, and seemed vested in my success and eager to share in my victories. What an amazing feeling.

As energy and momentum gathered, it seemed like people were waiting for us to do something together. But I didn’t know what to suggest. The idea of open distributed collaboration and co-creation sounded great, but how did you go about it?

The first project that manifested itself was Junto, an idea for an open discussion platform. The concept was to combine video conferencing with the intention of being publicly accessible and for the purpose of sharing knowledge and resources. The post I wrote explaining it was well received, and over 100 comments streamed in, offering encouragement and resources. A professor from Parsons reached out and offered to host the prototype on the New School server, a designer from Australia offered to put together a logo and UI mockups, and other collaborators around the world jumped in to experiment with it together. In less than a month, Junto was born.

The next project that came about was a video called The Future of Money. It started with an email I received from the Innovation Leader at SWIFT, a global financial messaging network for banks and financial institutions. He was inspired by some things I had written about the true meaning of wealth and value, and the ideas I’d been laying out about the future of money and currency. He wanted me to come speak at SIBOS, a huge financial services conferences that was to convene in Amsterdam.

“You have nothing to offer. Your ideas are silly. What do you know about finance? They’re going to think you’re a joke. You will fail.”

My mind paralyzing me and I almost turned down the offer. But my friends, family and online community said, “Go for it!” So I thought, what better way to express the emerging paradigm of a peer to peer, collaborative economy, than to show how it works by example?

I reached out to a video musician/designer team in Berlin, and asked if they’d be interested in co-creating a video for the conference. They were stoked, and even helped me find a great room to rent in their neighborhood, at a fraction of the price of a hotel room. They told me we could get interviews, editing and post-production done within 2 weeks.

I was both exhilarated and terrified.

Here I was, about to make a huge leap of faith: Traveling to a foreign country to work on a time-sensitive project with people who were essentially strangers.

But this is how the new economy works, where trust can be built in a networked environment with peers around the planet. Through blogs, Twitter, and video chats on Skype, we assessed each others’ caliber and decided it was worth a shot to collaborate.

When that business flight landed in Berlin, I was greeted by Gabriel and Pati, an amazing couple and gracious hosts who immediately made me feel at home. Though I had the rented room they arranged for me, I ended up crashing many a night on their living room futon after intensive workdays on the project. We documented our activity for the public to follow those two weeks via videoblogs and tweets.

We launched an online crowdfunding campaign to garner support from the public while we completed a project we had already committed to doing for free. We managed to raise around $6000 in just a few weeks.

The presentation of the video at SIBOS went well, and raised some awareness about how our generation views money and wealth. It even got mentions in the Huffington Post and Fast Company, and has received over 20K views on vimeo to date.

That entire experience was a testament to the potential of this new emerging economy, where we can create new opportunities for ourselves and partnerships with people around the globe.

Finally, a few months ago, I completed my graduate degree. I’ve since teamed up with a group of collaborators on a new video series, The Future of Facebook Project. We’re pushing the distributed collaboration meme further by framing this project under the banner of “Open Foresight.” It’s a methodology mashing up futures studies frameworks with open participation and media creation, with the intention of producing videos to raise awareness, spark dialogue, and move us towards shared understanding and meaning.

We’ve already had a successful crowdfunding campaign for the project on Kickstarter, and also received funding from our first Corporate Patron, Innotribe. We’ve done close to 30 interviews with incredible technologists, authors, futurists, and business leaders. The videos are already set to be presented at three conferences later this year.

And now here I am, in April 2011, with a career that is emerging from a simple blog and the genuine desire to connect communities and amplify the work of change agents and mission-driven organizations. I wouldn’t have believed this was possible a year ago.

Now it seems I’ve built a brand, and can actually build off that foundation to generate an income for myself while also promoting this new paradigm of collaborative work and peer to peer culture. I’ve recently started writing a blog on Forbes.com, and was asked to contribute on CNN.com as well, giving me an outlet to spread the word to the mainstream. Businesses and organizations are starting to reach out to me for assistance with online community building, brand development, and how to communicate a message.

Now I see this life as an Epic Adventure, with each of us in control of being the hero of our own personal mission. Here are three big insights I’ve had these past few years that make me confident in this belief:

Your community already exists, and is waiting for you.

Your vision already exists – it is a shared one.

The tools of empowerment already exist, and are ready to be wielded.

The pieces you need really are there, they’re just often hard to recognize. I went through a long phase of utter despair and hopelessness, and had no idea how to move forward. Only after putting myself out there with authenticity and a beginner’s mind did I see I was surrounded by a community of change agents with the heart, the vision, and the capacity to act.

As we all move forward in building the kind of society we want to see and the lives we want to lead, we realize more and more that everything is interconnected and we can go further by connecting, collaborating, and amplifying each other’s efforts than by stubbornly trying to reinvent the wheel.

We’re all in this together. Find your tribe and go change the world.

This essay appear in Shareable’s paperback Share or Die published by New Society, available from Amazon. Share or Die is also available for Kindle, iPad, and other e-readers. For the next article in Share or Die, Tom Judd’s “Organizing The Precariat”, click here.