When money is hoarded and removed from circulation it prevents people from transacting with one another, not because they don't need one another's services, but because they lack the medium of exchange needed to facilitate the transaction, and this is where alternative currencies, including timebanking, come in.

After less than a year in operation, the “EConomy of HOurs” (ECHO for short) in the UK has proven that their innovative approach to timebanking can catalyze much wider participation than normal by implementing a few, important tweaks to the conventional timebanking model.

In a brief interview with Matthew McStravick, the founder of the ECHO trading network, I discovered a few of the changes that can reinvigorate timebanks, the first of which being the involvement of businesses, or making it more "B2B" as well as P2P. 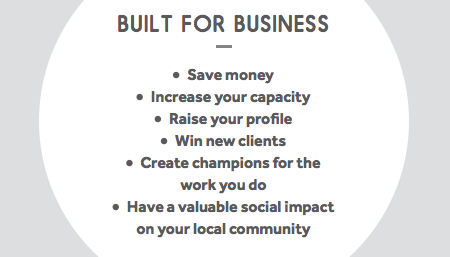 So far ECHO is managing to attract all sorts of organisations. A total of 500, from big corporations to small businesses, charities, and non-profits. By doing this they are expanding the pool of resources immensely. Matt pointed out that this approach allows businesses to diversify their portfolio by trading skills (having corporates train small to medium-sized businesses or charities, for example), earning the Echoes (one hour = one Echo), and then donating that currency to people that might need it as a form of CSR, thus raising their standing in the community and increasing the flow of "reputational capital".  As Matthew McStravick of ECHO said:

We studied gift economies before developing Echo. In them, ceremonial gifts, or gifts of an equal value, are passed between individuals and groups. They create social bonds of trust from which communities develop. In societies (like the Trobriand islands) these form the basis upon which positive commercial relationships can be developed.

After a long history of working with and researching timebanks, Matt and his team discovered a way to integrate businesses in the traditionally individual-based timebanking. By doing so, they sow the seeds of reputation which can lead people who participate in Echo to expand commercially as well as socially. However, Matt's main focus at this point is stimulating "repeat engagement" of participants, and this is accomplished by two "connectors" whose job it is to observe and encourage links between complementing members. These community stewards are the second important tweak, and I speak from personal experience…

Not long ago I hosted a pasta making workshop in London. I needed a space to host the workshop. Since I had charged just £5 per person as the entry fee (the cost of the necessary materials and ingredients), I didn't have extra money to rent a space, so I turned to the ECHO website to see if there were any spaces available. 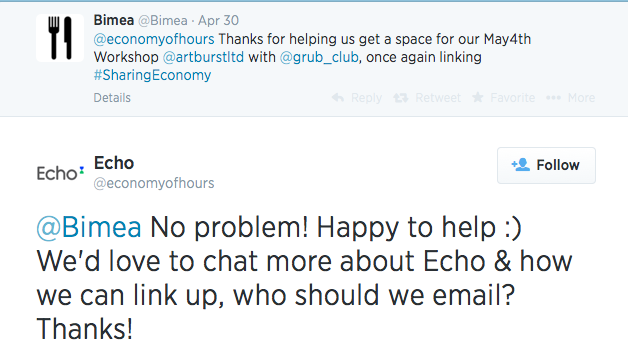 I found Artburst's educational workshop was on the network. They gave me their entire space for two and a half hours on a Sunday afternoon, which cost me 2.5 Echoes. At the last minute, I realised I had two extra seats available for the workshop. I told one of the Echo connectors, who put the word out to their network. Within a few hours, I "sold" two more tickets to the social media supervisor of Zipcar UK for 2.5 Echos, thus cancelling my negative Echo balance, which is something you could never do with money.

When you sign up to ECHO, you start out with a 20 hour credit, which allows you to get started on the network without having to validate your skills and, as you participate more and more, you might notice that you have skills which are much desired but you didn't even realise you had; like making pasta!

Another key aspect is that ECHO has also seeded several other timebanks, which all use the Echo currency so people trading on the Leicestershire Timebank can use (and have used) their Echoes in London. This makes the Echo network even more attractive as it is breaking free of the timebank silo which forces you to conduct all your transactions in one city or town; now you can earn Echoes in London and go take a vacation in lovely Sutton. 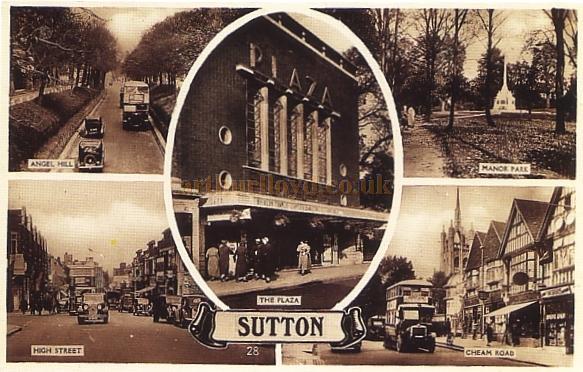 The ECHO mainframe hosts all these timebank's "nodes", so transactions can be conducted online between members in different cities using the Cyclos. Cyclos is a robust, secure and stable opensource banking software which has been around for at least 10 years. However, Matthew finds that "shoehorning" a timebank into it does have its drawbacks.

In the future, ECHO imagines itself as one of a "menu of currencies" that people will have at their disposal to transact with our changing economy thereby enabling people to participate more than if they were restricted to the state, fiat currency. The expanded ability to participate that alternative currencies give you is a way of creating value, which Antonio Negri, drawing on the work of Spinoza, defines as "the power to act." David Graeber, on the other hand, defines value as "what empowers people to act." So if you consider that if you have a skill to share or a need that you can't afford to satisfy with money, then spending Echoes can empower participants and create real economic value out of "empowered" communities.

Echoes give people and businesses the tools needed to transact with one another spontaneously without having to weigh the financial costs and benefits of doing so. This benefits even those outside the network, benefits that are not yet measurable, not even on David Cameron's "Happiness Index".