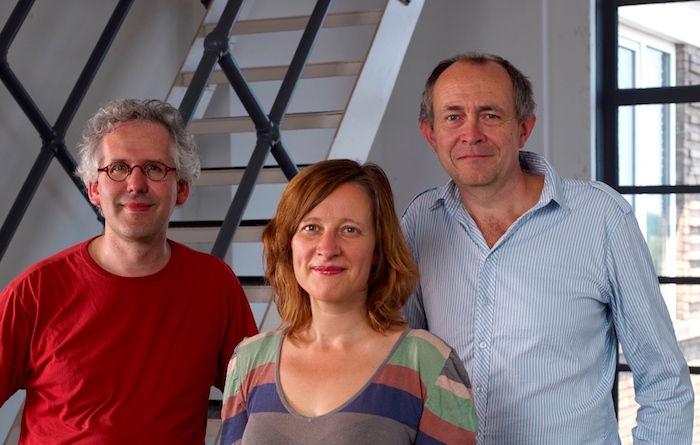 Freelance workers are known to be intrepid by nature. But perhaps the bravest — and most vulnerable — among them are those who don't have anyone to rely on for financial help, in case they become disabled or too ill to work.

That problem appears to have been addressed in the Netherlands, thanks to a trio that came up with the idea for Broodfonds (English translation: Breadfunds), an alternative kind of disability insurance that can replace lost income. Participants pay a set monthly contribution to a pool, plus a small administrative fee, that's made up of contributions from other self-employed folks. When someone in the group needs the funds, they file a "claim" with Broodfonds group leaders and are gifted the money for as long as they need it — receiving it as a gift allows recipients to accept the funds without paying income taxes.

The first Broodfonds group was founded in 2010 by entrepreneurs Biba Schoenmaker, Haiko Liefmann, and André Jonkers. Seven years later, there are now almost 13,000 members in close to 300 Broodfonds groups throughout the country — each made up of freelancers living in the same geographical region.

We got a chance to talk with Schoenmaker about how she and her two other co-founders were inspired to start Broodfonds — and how participation has always been about more than just securing disability insurance. (Note: Broodfonds does not have any connection with Bread Funds UK).

Kristine Wong: Tell me the story about how Broodfonds got started, and any challenges you faced when making it a reality.

Biba Schoenmaker: We [the co-founders] were already part of a group of entrepreneurs that had our own businesses related to social issues and sustainability. When we got together, the group would talk about problems we all faced as entrepreneurs who worked by ourselves, and try to find solutions.

One of the issues we talked about a lot was how it would be a big problem if one of us became ill, because we didn't have insurance to pay for our living expenses if we couldn't work for a few months due to illness or an accident. Two-thirds of self-employed entrepreneurs don't have disability insurance because the monthly cost to pay for this as an individual is too high.

That was why we started to think about how we could create our own solution. It took about two years for us to figure out how it would work, after talking with professionals and legislators about what was possible. When we created the concept of Broodfonds, we immediately started with one group that was made up of 20 members from our group of entrepreneurs. Then the group became 40 people. We named it Broodfonds because bread is a basic provision, and the funds give people money to buy food to eat.

In the first year no one was ill, but after a few years several people had become ill and we gave them support. We saw that it worked. Other people around us heard about the idea and became interested. They asked if they could join, but most of the time when you want to become a member of an existing Broodfonds group, you need to be introduced by another member.

Why do you have to already know at least one member of a Broodfunds group to join?

This is because it works on the basis of trust. You don't need the system to be controlled by doctors, because it's not necessary if you have a small group — maximum 50 people — who all know each other and live in the same area. In the beginning, people didn't know it could work that way, because people aren't used to using the concept of trust for such a system.

Anyone can become a member regardless of your age or health conditions, as long as you can show that you have a steady income of at least 750 euros a month. You pay a one-time joining fee of 250 euros. You also pay 10 euros a month as an administrative fee.

Then you choose the amount you will contribute per month to the pooled funds based on how much you want to receive per month in case you become ill. There are eight contribution levels you can choose from. If you decide to leave Broodfonds, you get back the money you contribute minus the administrative fees. If you move to another area, you can transfer your contributions to the new group’s pool. The monthly contributions are much lower than a premium for an insurance company.

Each of the Broodfonds groups has a small board of about three people. The board arranges practical things like in-person meetings. They have to have at least one meeting a year, but normally groups have two to three meetings a year, and some groups have more meetings.

When someone becomes unable to work, they tell the board members they are sick and they want to ask for help out of the Broodfonds group. The board members talk with the sick person and ask how the group can help on a social basis as well. They ask the person when the person became ill. Most of the time the groups have a 30-day waiting period before you can get the money because it’s not for small illnesses like the flu. After the board members have talked to the sick person they send the information to Broodfonds administrative offices. Then the people in the administrative office will make the gift ready. The board members also inform all the members that they now have  a new sick person, and tell them who the person is. The person will have written something about the illness and share what the situation is like for them.

You mentioned that the ill person is asked how they might need help on a "social" basis. What did you mean by that?

The board members and other members contact the sick person to say something supportive, or ask if they can do something for the person such as their shopping or take over some of their work during their illness.

So the Broodfonds groups serve as more than just a source of backup income.

Yes. The members like to see each other often. Some are more active than others socially. But most of the time they are more functioning like a network because they are all entrepreneurs and they help support each other. For example, if they are looking for a particular service, they will look in their own Broodfonds group to see if someone can do the job. They will also refer jobs to each other.

A lot of the Broodfonds groups now use a buddy system  as well. Members who become sick choose another member as a buddy for support. For example they might talk with them about how they can find replacement to do the work when I am gone, or talk about their illness and if their buddy can help them find the right specialist doctor for treatment.

You mentioned the monthly administrative fees that members pay. What does that support and how does that tie all the Broodfonds groups together nationwide?

When the three of us co-founders were helping all the other Broodfonds groups get started, the amount of work became too much to do on top of running our own businesses. So we all stopped our own work and we focused completely on Broodfonds. Now we have 11 other people who work with us in our administrative offices located in Utrecht.

We are a for-profit business, but it is not a profit-maximizing business. Over the years we have lowered the one-time fee people have to pay when they sign up since we realized we don’t need all of that money to operate.

I imagine that you might have had some challenges along the way, given that it might have seemed like you were taking away potential business from insurance companies.

That really wasn't a challenge. This was because what we were starting was a completely new kind of development as it wasn't something that already existed. We went to the authorities and gave them all our papers and explained everything about how we were organized. They did a check and said we are really something different than an insurance company, so we would not have to operate under the rules of other insurance companies.

Are there other Broodfonds groups around the world that have followed your lead?

Breadfunds UK was inspired by our group. We had initial meetings with them but it became something different from us. So this is why we are separate groups. Two years ago they started to look into doing a pilot, and now they are operational.

As far as we know, there are no other groups out there that look like what we are doing, but that doesn’t mean that they don't exist.

Beyond monetary support, what has the impact been for individuals participating in Broodfonds groups?

Most of the time people are actually kind of emotional because it's a special experience. When you become ill and you get the gifts from the other members, you see all the names of the people whose funds are sent to your account along with the amounts they give you. There's also a feeling of collectiveness among the group when they support an individual.

There's a lot of stress when you are ill because you worry about how you can find new clients when you are better. Or you worry if old clients will return. It's really heartwarming when you get all this support from other people. Most of the time, people will ask the sick person if they can do something more to help with their daily life.

Do you have any final thoughts you'd like to add?

When we developed the Broodfonds concept, we made sure that it fit in with our value system of what we found to be important in life. It allows people like us to make a living from what they love to do and what they are passionate about. It gives them the freedom to run their own business and still have a safety net at the same time. And as Broodfonds has grown, we have stayed close to those values.