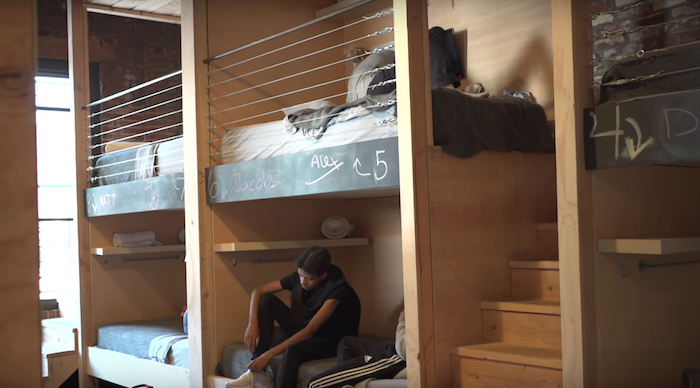 A new kind of shared living entity — the Podshare — has been popping up in Los Angeles, California, this year. “The idea is like a coffee shop or your neighborhood bar, but for beds,” says founder Elvina Beck. There are now five Podshare locations in the L.A. area.

A Podshare is part dormitory, part coworking space, and part in-person version of a social network. Individual “pods” are bunk beds, some of which convert into desks — “custom-built minimalist spaces for social travelers,” according to the project’s website. Users, known as “pod-estrians,” share a single, large dorm room which can house several dozen people. They also have access to a communal food shelf, bike rentals, and some shared toiletries. One location also offers day rates for people who need to power nap or plug in to a well-equipped coworking space. Open-mic nights and dodgeball evenings are common. It’s “very amicable and social because of the floor plan,” Beck says, in a short film. “People don’t necessarily want to own space to be alone in — they want to have access to space with other people.”

Although pods are equipped with outlets and TV screens for people who want to relax on their own, Beck stresses the social aspect of the project. Users write their names on slates below their beds, and anyone can see what several of their roommates are doing at any one time. This makes conversations easier, and also acts as a shared security mechanism.

Some “pod-estrians” are travellers looking for a place to stay the night while others are looking for medium-term housing for work or other reasons. Users stay for as long as three months. There are now over 5,000 “pod-estrians” from around the world. Beck and her colleagues dream of a global network of pods.

“If you have a gym membership, you can go to any one of a number of gyms, work out there, they give you towels and everything,” Beck says. “I thought, why don’t we have that with housing? … The future is access to a space, not ownership.”

To learn more, watch this short film or visit podshare.co.

Video and header screenshot via Faircompanies.com