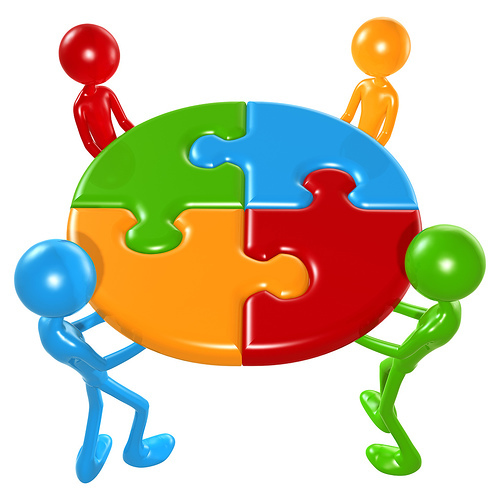 We are at an inflection point in human history that requires that we answer the call. There is no more time to dawdle. This inflection point can be characterzized by the convergence of a transformation in values with a technological revolution. This combination will enable a techno-cultural re-ordering that will allow us to interact differently. This will make it possible to organize and coordinate activity in new and innovative ways as well as to re-define the very structure of our institutions since, no doubt, the structure of our institutions is deeply connected to how we interact with each other.

A key feature of the reorganizing of our institutions will be the way that resources are allocated to change agents, visionaries, revolutionaries and the like. The emerging Internet and network infrastructure makes it possible both to coordinate activity as well as to source and access financial capital in new and innovative ways; ways which circumvent the current institutional framework against which most change stand in opposition. Within this context many innovative models that enable us to coordinate activity and resources around projects will be developed. Against this backdrop we will advance a few ideas as to what the future of crowdfunding holds.

The Tipping Point: Ushering in the New Paradigm

Change agents need to be aware of their historical context. We are at a Tipping Point that is the result of the convergence of dramatically shifting values and perspectives, in conjunction with a rapid transformation in the dynamics of communication and interaction. The convergence of these with larger socio-technological trends is a combination ripe with possibility. 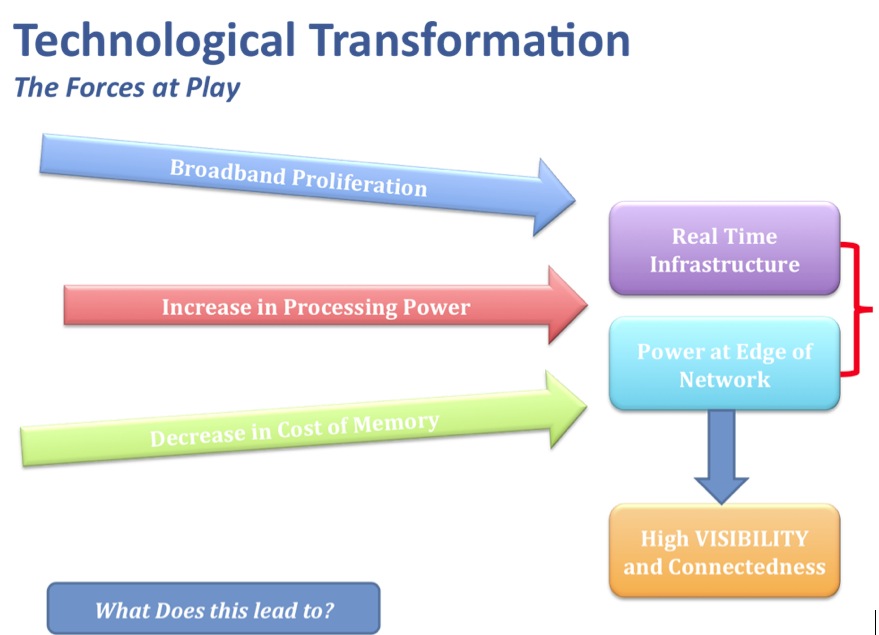 The values transformation is the result of a number of different forces including climate change, rampant distrust of and disillusion in the political process, the collapse of the financial markets, the introduction of species extinction risk into the discourse, alienation and fragmentation within western culture, global economic inequity, terrorism and war, the erosion of the importance of spirituality and a sense of higher purpose in western culture etc…the list goes on. The conjunction of all of the above is leading a massive sense of discontent that is permeating our collective consciousness. 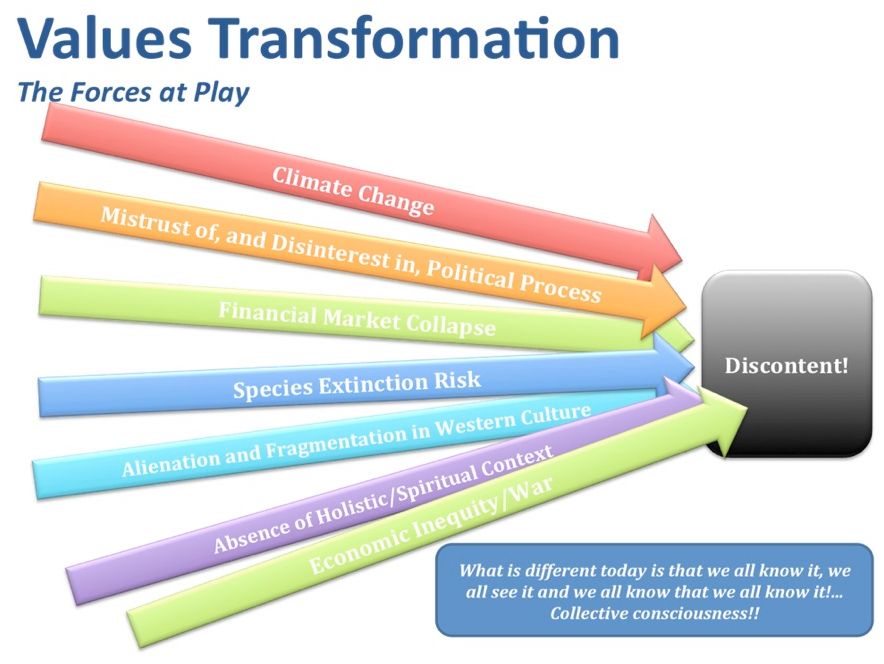 This transformation in values that is taking place is simultaneous with, and in part the result of, the rapid evolution of the technological infrastructure that is substantially increasing connectivity and communication across the world. This technological ‘revolution’ is in itself the result of several convergent forces: the increased ubiquity of broadband in the Western hemisphere, and the rapid decrease in the price of both memory and processing power. The conjunction of these three forces is leading to the Real Time Infrastructure; a world where we are both highly connected and visible to each other and where processing power is pushed to the edge of the network. We are literally connected to most of the people that matter in our lives all the time. Furthermore, with the increased capability of search and filtering tools, we have the ability to find people at a moment’s notice.

If we are indeed at a Tipping Point, then we need to reflect on what the future holds. The New Paradigm that we will collectively usher in, due to its basis in changes in patterns of communication, will both serve to reflect those changes. 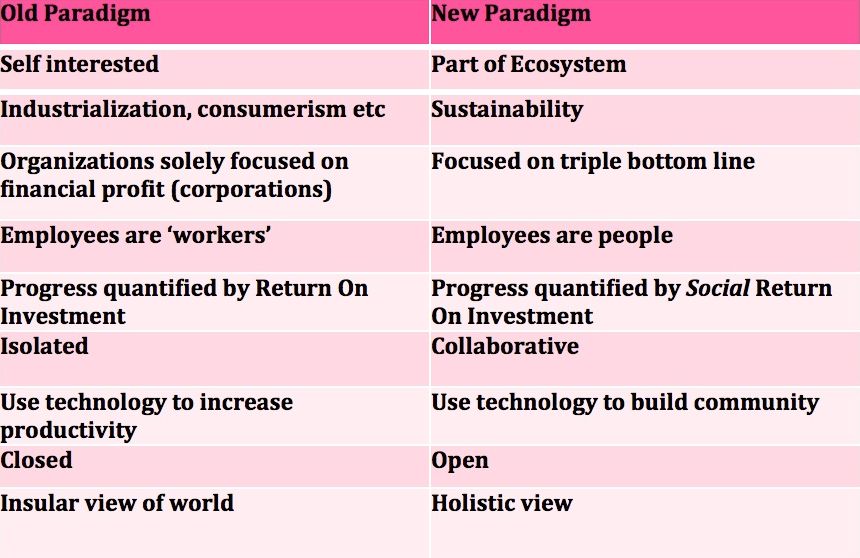 We are moving to a world that is more open than ever before and where privacy is becoming a thing of the past. We will see a transition from hierarchical governance and institutional forms to ones which are based upon decentralization and peer-to-peer interaction. Cooperation and collaboration will replace the ethic of self-interest that has been reinforced by capitalism and the ‘economic lens’ that institutionalizes greed and avarice. Living isolated, insularly focused lives will be replaced by more connected and holistic ways of being in the world. Corporations, the dominant legal structure of the last several centuries will, in time, be replaced by legal entities that are aligned with a broader mission than simply the maximization of financial profit. We will see the birth and the boon of the social finance sector and other institutional paradigms that are more deeply connected with our fundamental desire to support life, love, our health and the health of the planet. Finally, we will see a revival of the need to view the self and our agency in the world merely as ‘consumers’ and ‘producers’; as merely cogs in a larger architecture that is gauged purely on our ‘efficiency’ and ‘productivity’. This will result in a more holistic picture of ourselves that recognizes our need to commit to the health of mind, body and spirit.

This is the context that modern day change agents will create, and they will do it using innovative models and tools made possible by the rapidly changing communications architecture that radically transforms the very nature of community. It is against this backdrop that we need to understand the emergent financing, and more generally, resource allocation models at our disposal. 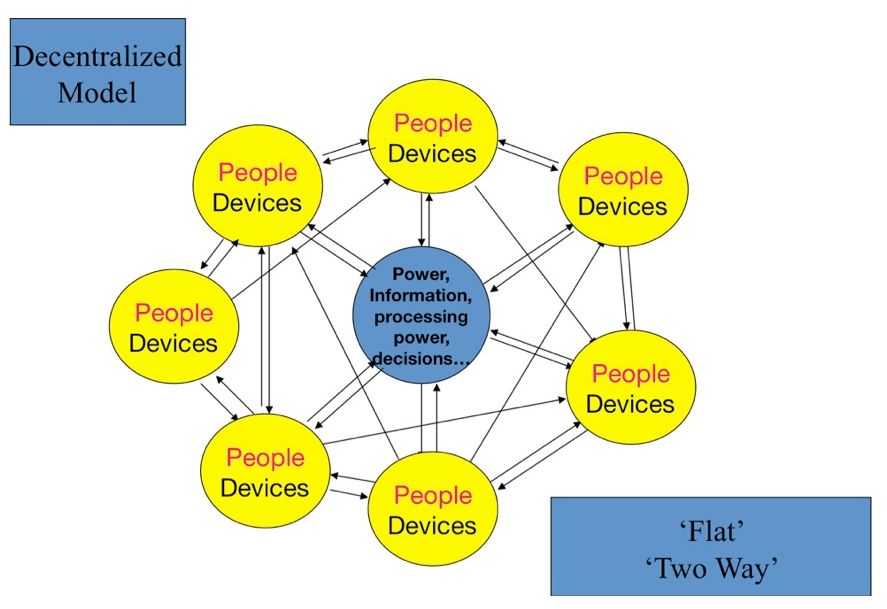 The current explosion in crowdsourcing as a means towards tapping the intelligence and power of the masses, and crowdfunding as a means of raising financial capital, owe something to those that paved the way through the exploration of collaboration models that were designed to engage large numbers of people. The most well known examples are the Linux operating system and Wikipedia. In both cases a massive, heterogenous and geographically dispersed constituency has been able to sufficiently coordinate activity to create something that is much more functional than anything to which they can be compared. Linux is the poster boy for the open source software movement, and the principles of open source which it has spawned. Wikipedia is the single largest information resource which, for the most part, has been developed in an open way, allowing virtually anyone to participate. In both cases, we have seen that non-hierarchical models that don’t rely on centralized quality control are not required. The collective good will of the crowd is sufficient.

The successes of projects like Linux and Wikipedia have opened the eyes for those exploring innovative models to seemingly intractable problems, one of which is raising capital for risky projects that don’t meet traditional financial criteria. This has resulted, in the last couple of years, in an explosion of crowdfunding platforms onto the scene. 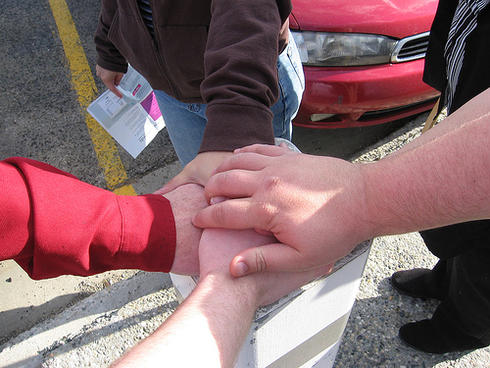 Crowdfunding platforms initially provided a central location for artists to promote their projects. Artistic projects are ideal in this context because the output is tangibly visible and is something that contributors can share in. Furthermore, the projects are easy to define and easy to represent via rich media which is the preferred mode of communication in the new world.

In the recent past, we have seen the emergence of several platforms, the focus of which is to support ventures that deliver social value — StartSomeGood, Bzzbnk and 33Needs, for example. We can expect more platforms of this sort to emerge in the coming months as more and more social innovators realize the need to find alternative ways to support their more experimental projects. Since the needs of social innovators differ from those of artists, the crowdfunding models will need to evolve.

The Emergence of TribeSourcing

TribeSourcing, a term coined by Mark Frazier, is the most important feature of new platforms, one that borrows from the principles of mass collaboration which matches the platform to the group, community or movement within which it is situated. Currently crowdsourcing platforms are designed to enable a single entrepreneur to simply solicit funds from her network, but the relationship between her contacts is not a consideration. Current platforms don’t account for the fact that people are situated within communities and that the people within communities have established relationships. New platforms will therefore include mechanisms that enable projects within a particular community to be evaluated, voted upon and supported. They will also include collaboration features that enable members in the larger ‘tribe’ to provide non-financial support: helping with websites, business planning etc. This will reflect a recognition that entrepreneurs need more than simply financial capital. They need social capital and intellectual capital as well.

This move towards TribeSourcing will include a number of specific features that support ongoing projects (as opposed to isolated campaigns): 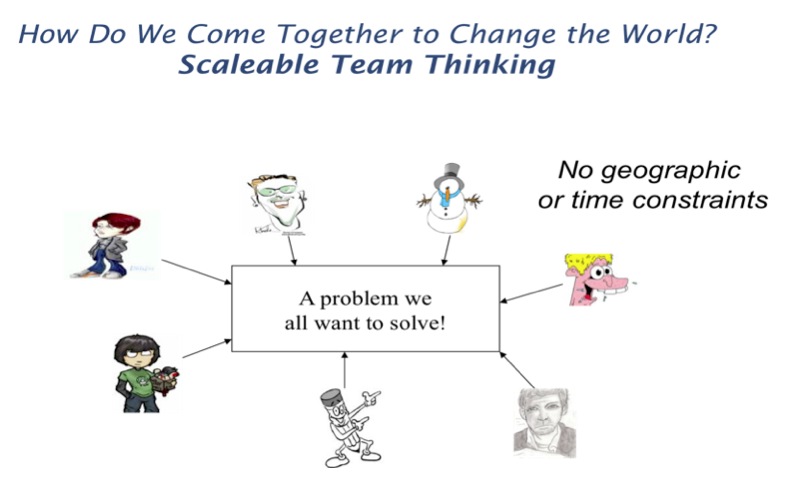 Social innovators and change agents rely on the power of the crowd and hence one strategy that they will likely pursue in time is the development of an infrastructure to fund a commons pool, to act as an umbrella structure that more broadly serves the interests of innovators and change agents. The precise details of what this structure will look like remain to be developed, but we can imagine the creation of a commons that was structured in such a way to that it garnered the trust and confidence of the crowd. We can imagine change agents world wide signing up to contribute $10/month. We can imagine the crowd scaling to a million, two million, ten million, and so on.

In summary, the future looks bright for change agents seeking sources of capital that are distinct from what is available via current institutional channels. Crowdfunding is coming of age and we can expect a proliferation of innovative platforms and models that will be more collaborative and engage communities around projects in a deeper and more powerful way.

Suresh Fernando is a visionary, a strategist, a leader and a project manager whose breadth and depth of analysis and understanding of the way that technology is changing the way

Suresh Fernando is a visionary, a strategist, a leader and a project manager whose breadth and depth of analysis and understanding of the way that technology is changing the way that we interact with each makes it possible for him to design precise strategies that can transform and perpare your organization for the new paradigm that is emerging. He blogs at Masskollab.