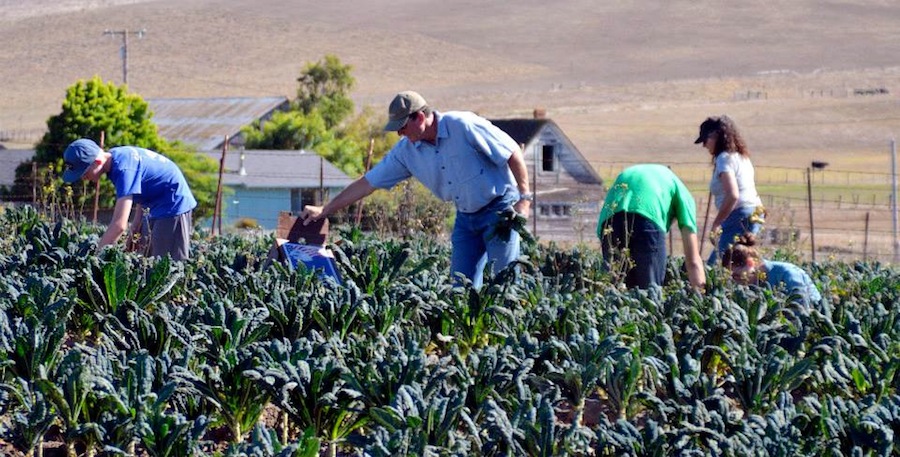 A new food gleaning and supply-sharing program called Cropmobster has created simple and effective solutions to address food waste and hunger and increase farmer visibility in a decentralized, community-based way. And it’s spreading like wildfire.

Perched along the rolling hills of Coastal Sonoma County, Bloomfield Farms spreads out across 50 acres, close to 40 of which are thick with kale, chard, heirloom tomatoes, summer squash, potatoes and more. The foggy gray skies that often hang over this part of the county on summer mornings have not deterred several families from venturing out to the farm where they make their way down rows of greens, picking their own vegetables as a part of the "U Pick" program. Back at the farm stand, several more gather for a Sunday pay-what-you-can brunch. A musician strums his guitar, friends and strangers alike gather around community tables and the sun breaks through the clouds for an idyllic late summer treat.

It's not just the screaming deals through Bloomfield's pick-your-own program, the local, organic meal or the ambiance on these laid-back Sundays that have given Bloomfield Farms a prominent place on the map in the North Bay's tight-knit organic farming community. A new food gleaning and supply-sharing program called Cropmobster, spearheaded by Bloomfield's General Manager Nick Papadopolous, has created simple and effective solutions to address food waste and hunger and increase farmer visibility in a decentralized, community-based way. And it's spreading like wildfire.

“It started in March,” says Papadopolous. “Standing in our vegetable cooler on a Sunday night it finally clicked that, wow, there is a lot of food left at the end of the week that should go to people.”

His response was to mobilize; to get this food away from the compost and onto tables. He began by posting deals on Facebook. He was honest about the situation, letting people know that they had excess food and that they’d love to get this food to people, as well as help cover some of their costs. On the first weekend, someone texted Papadopolous, “I’m in!” The second weekend, the same thing happened. 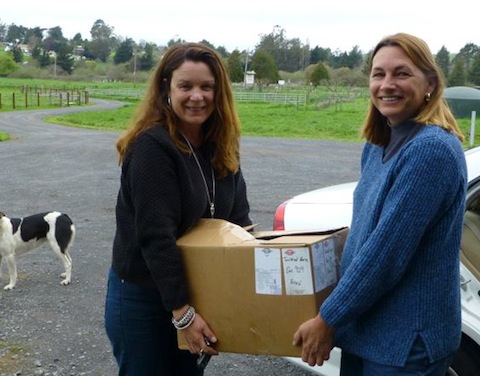 Cropmobsters do their part to get food to hungry people. Photo: Twisted Horn Ranch

“Both of those times,” says Papadopolous, “it was people just like you: moms, parents, whoever, driving out the very next day for perfectly edible wonderful organic food and distributing it to their neighbors. Everyone got a really great deal, we recovered some of our costs, we got to meet some amazing people and build new friends in the community.”

Experiencing the quick and relatively simple benefits of his crowdsourcing solution, Papadopolous thought of the benefits local grocers, distributors and anyone with excess food could experience. He teamed up with a friend to build Cropmobster, an instant alert platform that anyone who has excess food can post to. Community members can also make posts asking for donations of plant starts for school or community gardens and even, in the case of several elders who have used Cropmobster, asking for donations of food or garden supplies for personal use. To date, Papadopolous says that anywhere from twenty to thirty school gardens have been planted with seedlings that would have otherwise gone to compost.

“All of these great groups are out there in our community doing awesome work,” he says. “But there is no community exchange or infrastructure to allow folks to communicate and to mobilize and use crowd-sourcing and decentralized systems to really tackle some of these problems.”

Past deals on Cropmobster have included gleanings of four acres of peaches; six acres of premium grapes; farmers selling ten bunches of basil for $1 each; restaurants and bakers offering truck loads of stale bread to pig farmers; and dozens of egg-laying hens finding new homes.

Based in Sonoma County, Cropmombster has reached beyond the county lines and in less than a year is now utilized by hunger-relief organizations, churches, farmers, ranchers, retailers and individuals in 11 northern California counties. It has caught the attention of local and national community leadership, too. From agriculture commissioners, farmer advocacy groups and people like Slipstream Strategy founder Tamsin Smith and Assistant Chief of Natural Resources Conservation Service James Gore, who both serve on the groups advisory committee, groups and individuals are watching closely and stepping in to help. One can hope that the concept can continue to spread to where it is needed the most. 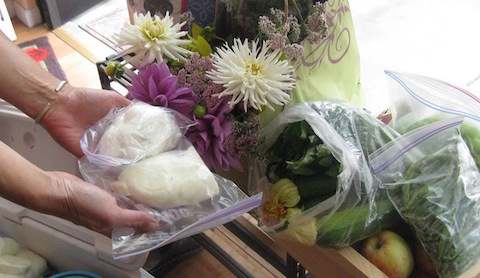 “Our vision with the Cropmobster community exchange,” says Papadopolous, “is to create a community platform to allow folks to exchange excess food and other materials, and we've seen a lot of donations. He continues, “For instance, one of the greatest grocers in San Francisco, Bi-Rite Market, is using Cropmobster to publish donations.”

An independently-owned, family-run grocer based in San Francisco, Bi-Rite focuses on sourcing and selling artisanal and sustainably-sourced food. The grocer has sourced farm-direct produce from Bloomfield for several years and became Cropmobster's first San Francisco-based retailer.

“We’ve used Cropmobster as a way to manage our in-house, day-of food excess at both of our grocery stores, and [to] specifically target and build ongoing relationships with hunger relief organizations in San Francisco,” says Bi-Rite's Community Coordinator Shakirah Simley. “We post online alerts and Cropmobster's staff blasts this donation out through their platform, through social media, and direct e-mail. We generally hear from a non-profit organization within the hour.”

Simley says that within the first two months of using Cropmobster, Bi-Rite donated over $2,000 worth of organic fresh produce and artisanal food to San Francisco hunger relief organizations. They’ve also made connections with organizations like Glide SF, Project Open Hand, Episcopal Community Services and Food Runners, helping feed several hundred food-insecure individuals including the homeless and people living with HIV. Cropmobster posts impact reports so the public can see where the food goes and watch the ripples of positive impact as it spreads through the community.

With roughly 14-15 percent of U.S. households currently experiencing, or at-risk of, food insecurity, and an estimated 40 percent of food being wasted before ever reaching those in need, Cropmobster continues to connect the dots locally. In addition to Bi-Rite's donations, several other Bay Area hunger-relief organizations have reaped the benefits of Cropmobster through donations or through gleaning events that are specifically geared toward nonprofit organizations. On a more basic level, individuals often benefit directly when someone with a few apple trees makes a post offering access to their crop for free. Community members connect and develop friendships and business relationships with one another, and local farmers gain visibility.

“It benefited us with getting a minimal profit and benefited the recipient with getting a high quality product at a cheap price,” says Karen McKenzie of Twin Palms Ranch in Santa Rosa. “It also spread the word about our farm and who and what we are in the community.” 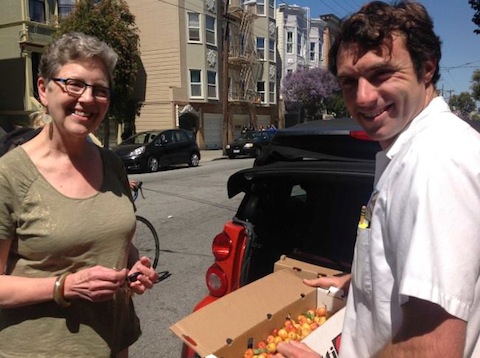 Papadopolous stresses that it’s important for farmers to be recognized more in the community.

“Over 50 percent of small farms in this state lose money,” he says. “We've got to find a way to lift up farms and make them visible. And if there's excess, it should go to the public. I've never seen an industry or a business where there's so much loss and waste.”

Papadopolous says that projects like Cropmobster can help put a dent in the problem and mobilize the community around things that no one can disagree with.

“We really need more projects that tend to inspire people to work together,” he says. “No matter where this goes, it's important to shatter the mindset that it's acceptable for 40 percent of food to go to waste. What's inspiring us at the end of the day are the impacts,” he continues. “It is a really exciting time to look at the systems in our communities and see if there are ways to connect dots differently, and take it to the next level.”

Dani Burlison is a wanna be anthropologist and a staff writer for a Bay Area alt-weekly. Her writing also appears at McSweeney's Internet Tendency, The Rumpus, The Los Angeles Review,

Dani Burlison is a wanna be anthropologist and a staff writer for a Bay Area alt-weekly. Her writing also appears at McSweeney's Internet Tendency, The Rumpus, The Los Angeles Review, Ploughshares, Chevy Culture Magazine, Know Journal, Bike Monkey Magazine and other publications. You can find her at www.daniburlison.com or on Twitter at @DaniBurlison