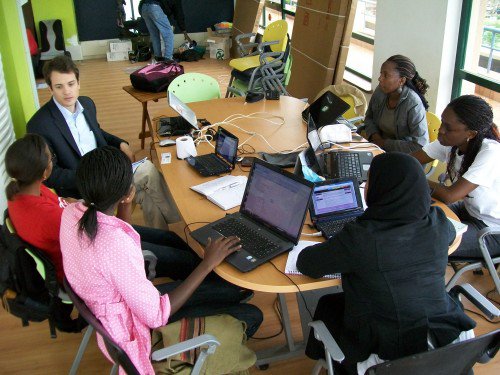 A community of female "geeks" in Kenya are using the power of community and collaboration to jump start their country's tech industry. Africa might be the last place most people think of when imagining future technological innovation, but as these women demonstrate, a collective of creative minds sharing knowledge can exist anywhere and be a powerful force for change.

According to an NPR report, Kenya has recently laid hundreds of miles of fiber optic cable. Google and IBM have even set up shop here, and the city has plans for a $7 billion technology hub just outside the capital, Nairobi.

Still, a few companies and fast internet do not a Silicon Valley make. What's needed is a culture of innovation, an interconnected community in which people feel welcome to exchange ideas, collaborate on projects, and enjoy support from like-minded peers.

Sound familiar? These are all benefits of coworking, and principles of the growing global coworking movement. Without referring to it expressly, these geeky women have already realized that decreasing their physical distance from one another serves to accelerate both personal and professional goals.

The result is a new collective, called Akirachix. "So akira is a Japanese word. It means energy and intelligence. And we are energetic and intelligent chicks," says Judith Owigar, the collective's president.

The collective was founded at iHub, a coworking/hacker space in Nairobi, but has big plans for expansion in 2013. "In addition to expanding our training program and increasing our membership, we have some exciting initiatives in mobile technology that will reach out to youth all across the country and beyond," states the website.

Members "aren't trying to come up with the next Facebook or another app to share your photos. They're solving local problems. There's one app that brings math and reading help by cellphone to village schools. There's an app that lets Kenyans who don't have computers do their online shopping by cellphone."

Just like coworking communities in America, the UK, and China, Akirachix helps to reduce feelings of isolation among those who have chosen an out-of-the-ordinary profession. The community hopes its continued growth will not only support Kenya's growing quest for modernization, but also light the way for others who might have ideas for solving local problems through technology.

Owigar says they're sending a message to the next wave of girl geeks. "We need them to see that we are doing it and we enjoy it. You know, you don't find many African women looking for the spotlight. Most of them tend to hide their awesomeness," Owigar says.