Connections, Community & the Pursuit of Happiness - Shareable
Skip to content 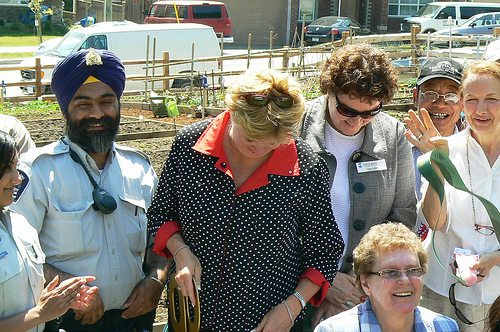 I remember a dizzying round of strategy sessions, protest rallies, public meetings, more strategy sessions, and, eventually, victory parties, which wound up redirecting my life and work in gratifying ways Until that point, I rarely thought about opportunities for improving people’s lives by boosting public life and revitalizing public spaces.

When we stopped the widening of both Interstate 35W and Lyndale Avenue, I was shocked. That had never happened before in Minneapolis-St. Paul. Roadplanners, armed with statistical models forecasting traffic congestion, were a powerful force in Minnesota. But not as powerful as citizens who feel a sense of ownership about their community and are willing to work together to save it. I realize now this effort was a shining example of the commons in action. We believed the neighborhood belonged to us, and we made it clear to city and state officials that we would actively participate in any decisions that affect its future.

As sweet as this triumph was, I felt a tinge of sadness. I would miss connecting regularly with these allies who through the months had become close friends. I needn’t have worried. The all-out assault on Kingfield and surrounding neighborhoods instilled a profound sense of possibility in us. Further meetings and parties and brainstorming session and more parties were soon on the calendar We recognized it was up to us to make the neighborhood safer, cleaner, more inclusive, interesting, and enjoyable. We joined together to prevent crime and host public events My partner (and On the Commons co- director) Julie Ristau became president of the neighborhood organization and helped inaugurate a wave of community improvements. New coffee shops, restaurants, stores, and taverns opened.

Experiencing firsthand the collaborative capacity of everyday people to shape their own community has influenced me deeply as a writer, speaker, and consultant. Much of my work now focuses on how citizens can make the places they live better for everyone. The articles gathered in On The Commons’ new book How to Design Our World for Happiness: A Commons Guide to Placmaking, Public Space and Enjoying a Convivial Life (download it here for free) explore the wide horizons of what’s possible in communities everywhere.

None of us in Kingfield used terms like “placemaking” or “commons” to describe what we were doing to boost the neighborhood. But I later realized that’s exactly what we were doing. Placemaking means people taking action to preserve or restore a sense of place in their community, which enriches their lives in ways large and small. The commons refers to what we share together, including public places, as well as the rich web of human relationships that makes this sharing possible.An understanding of the practices and the principles of the commons is an invaluable tool for placemaking efforts.

Over the past decade the terms placemaking and the commons have become increasingly popular, a sign of the rising recognition about what makes our communities strong and alive. This new book chronicles many dimensions of this growing movement, whose impact can be measured in the numerous friendships, romances, business ventures, community initiatives, and other human connections that arise each day in public places around the globe. Yet the ultimate goal of placemaking and the commons is even more elemental: to expand the possibilities for happiness in everyone’s world.